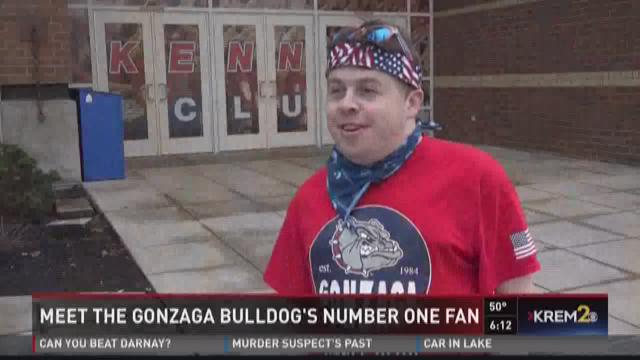 SPOKANE, Wash. – Gonzaga fans are known nationwide for their passion, but there’s a reigning super fan who stands apart.

Christian Layman believes he is the number one fan. He said he has been to 60 games. He’s always in his signature Zag gear, including shoelaces that he swapped out to match.

"Every year we always go to the NCAA tournament for March Madness. Our 19th consecutive time," said Layman.

Scroll through his Facebook feed, and you will find post after post about the bulldogs. He collects every print article he comes across, too. You can quiz him on just about any bulldog trivia, and he will probably know the answer. He best embodies how sometimes basketball can be more than just basketball.

“This place is just awesome. The Kennel, there's no place like this place. It's magical,” he said. “I'm just happy to be there. I don't care if I have to sit in the trash can. I don't care.”

Ask a Zag on campus, and chances are they've heard of Layman and have seen him rocking out with the best of them at the games.

"I play trumpet in the bulldog band. I would say Christian Layman is the biggest Gonzaga basketball fan I've ever met, bar none. He just brings so much passion and energy to every game. He stands up the entire time," said Gonzaga Senior Robert Perry.

Christian may not be in Salt Lake City for round one of the tournament but you can bet he'll be cheering.