SPOKANE, Wash. — We often hear about the latest viral trends from our savvy social media friends or when they make headlines on the news.

From dancing outside of a moving car to throwing vans in the air, some are downright dangerous, while others are just strange. Something new is trending and it's catching on here in Spokane.

It's called the "Trashtag Challenge," the goal is to encourage people to make communities cleaner and share their service project with others.

"On Facebook, Instagram and everywhere else and thought it was super cool and we wanted to be a part of it," said Isaac Loren, with the Washington Air National Guard.

Loren and three other Tech Sergeants decided to make a difference right outside their downtown office in on Washington Street and the Centennial Trail.

Here's how the challenge works:

1. Find an area that needs some cleaning up

3. Clean up the area

4. Take an after photo and share it on your social media with #Trashtagchallenge

Wrappers, cigarette buds and even needles are some of the litter the team picked up. They recommend taking safety precautions, wearing gloves and avoiding sharp objects.

It's someone else's trash, but to them, it doesn't matter who's responsible because this is their home too.

"Since we live here and work here, why not clean up where we live and work," said Cassie Kennedy, with the Washington Air National Guard.

The movement has gone around the world, more than 10,000 posts on Instagram and thousands more on Facebook. 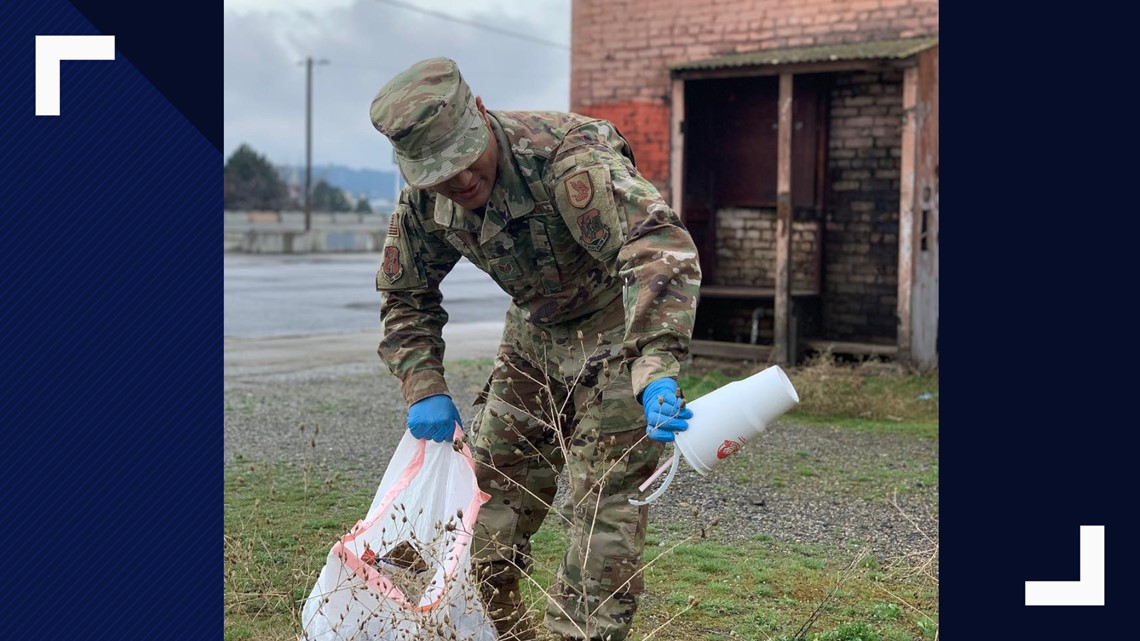 Some projects were big, but this shouldn't deter you because many hands can make a big difference.

"If everyone around the world did that, took five minutes right now and cleaned up, what a huge difference that would make," Loren said.

It's about service before self, a challenge, promoting something positive this team hopes stays viral.

"Everybody lives here in the community so it's important to take part in that, take care of the community and give back," Loren said.

Anyone can participate at anytime, anywhere just take before and after pictures and tag #trashtagchallenge.