The poster said they were going to "shoot" sheriffs, including Spokane County Sheriff Ozzie Knezovich, over their stances on a recently passed gun-control measure. 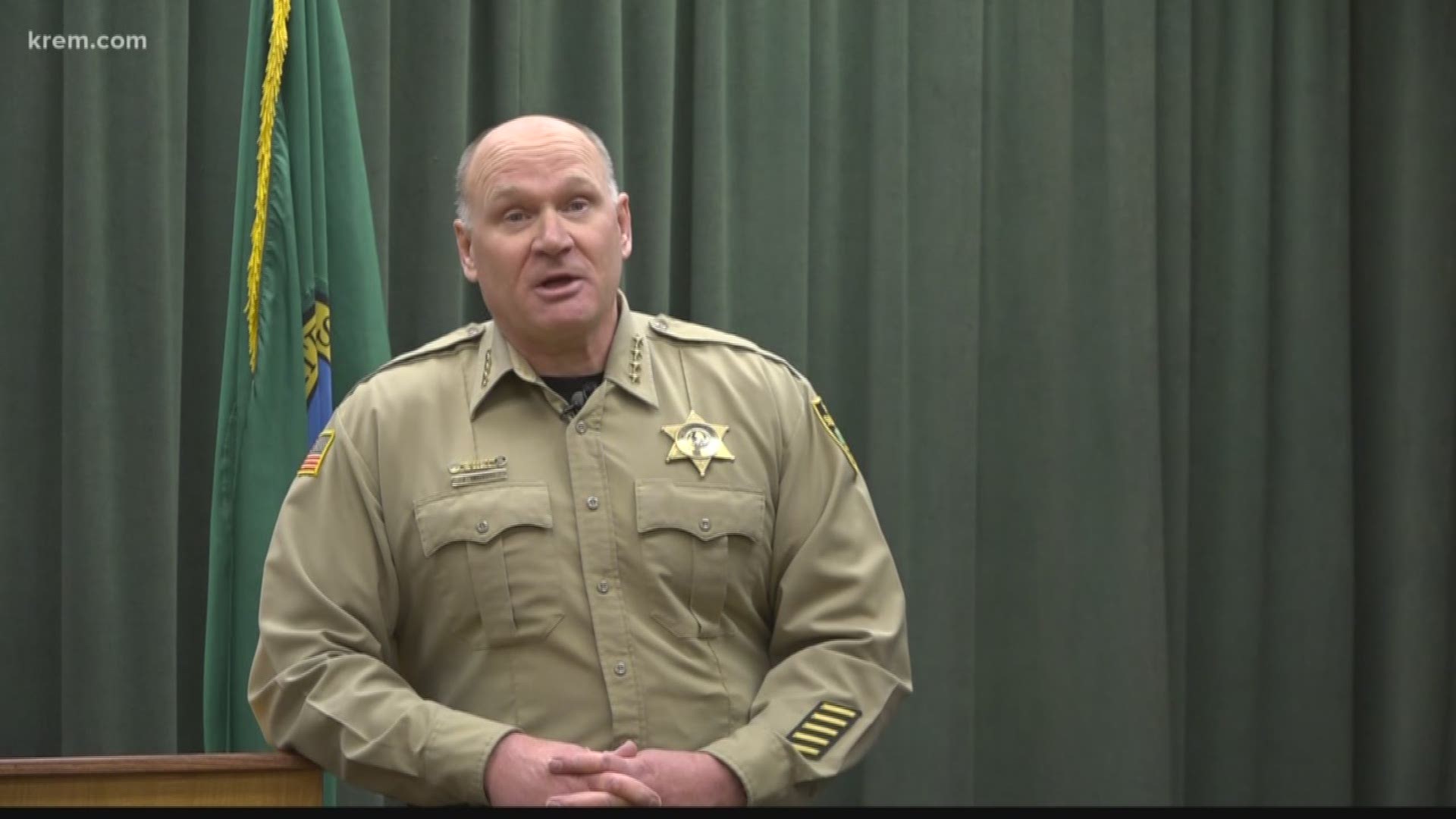 SPOKANE COUNTY, Wash. — Spokane County Sheriff Ozzie Knezovich said that sheriff's offices in multiple counties and the FBI's Joint Terrorism Task Force are investigating threats made against him and other sheriffs around the state due to their stances on Initiative 1639.

A Facebook user, identified as being located in Washington but outside of Spokane County, made threats toward sheriffs, including Knezovich.

According to a press release from the SCSO, Spokane County Crime Check received a tip about the threats at about 1 p.m. on Monday. The caller who reported the comments was also located outside of Spokane County.

The caller said the posts threatened Washington sheriffs who have said they will not or cannot enforce I-1639.

Knezovich has been critical of I-1639, and recently said he does not have the authority to enforce I-1639. Several other Washington sheriffs have said they will not enforce the measure.

In a press conference Tuesday afternoon, Knezovich said that none of the parts of the law — selling guns and training gun owners —  fall under his enforcement. He also said he expected issues relating to the initiative when it was first passed.

“I-1639 is not going to go away. I knew that the day that this thing got passed by the Supreme Court, that this was going to be problematic across the board," Knezovich said.

I-1639 was passed by Washington voters in November and puts stricter restrictions on semi-automatic rifle ownership. These include raising the minimum purchasing age from 18 to 21, requiring buyers to first pass a firearms safety course and more enhanced background checks.

Another post from the Facebook user also referenced Republicans, saying "I am going to kill every single one of them," according to the release. That comment came on a post about a story about Grant County Sheriff Tom Jones announcing his department would not enforce the initiative.

Knezovich said at the press conference that the profile had made threats to people before.

"If you take a look at his Facebook site, which you can’t until we identify him, you’ll find that he has made threats to several people in the past," Knezovich said. "He identifies himself as a Marxist. It’s ironic that this is a guy that wants to ban guns but wants to kill people.”

Knezovich said that it has not been confirmed whether the account actually belongs to a person bearing the same name.

While talking about the threat, Knezovich also talked about previous threats against him from people inside Spokane County, and said he hopes this threat will be prosecuted because others have not.

“The threat is coming from a source outside of Spokane County, so there might be a chance of prosecution on this one," he said. "I’ve learned over the last couple of years that you can threaten to kill the sheriff of Spokane County and get away with it.”

He also said prosecuting the person behind the account is important as it may help put an end to such threats against officials.

While he has dealt with threats before, Knezovich said all threats have to be taken seriously and this one is no different. He said the account behind the current threat "seems to have all of the ear-markings of that guy you read about ... that ends up shooting somebody and we all say we saw it coming."

He also said that living under threats is something he is now used to dealing with as an elected official, but that he still cannot tell who is serious about carrying out an attack.

"This is how you live your life and you never know if that person walking up to you is going to be that one that pretty much ends it," he said. "But most of these people never walk up to the front side of you, its always from behind so you never see it coming.”