The resolution from city council members says the armed militia groups at Spokane protests "appear to be in direct violation of state law." 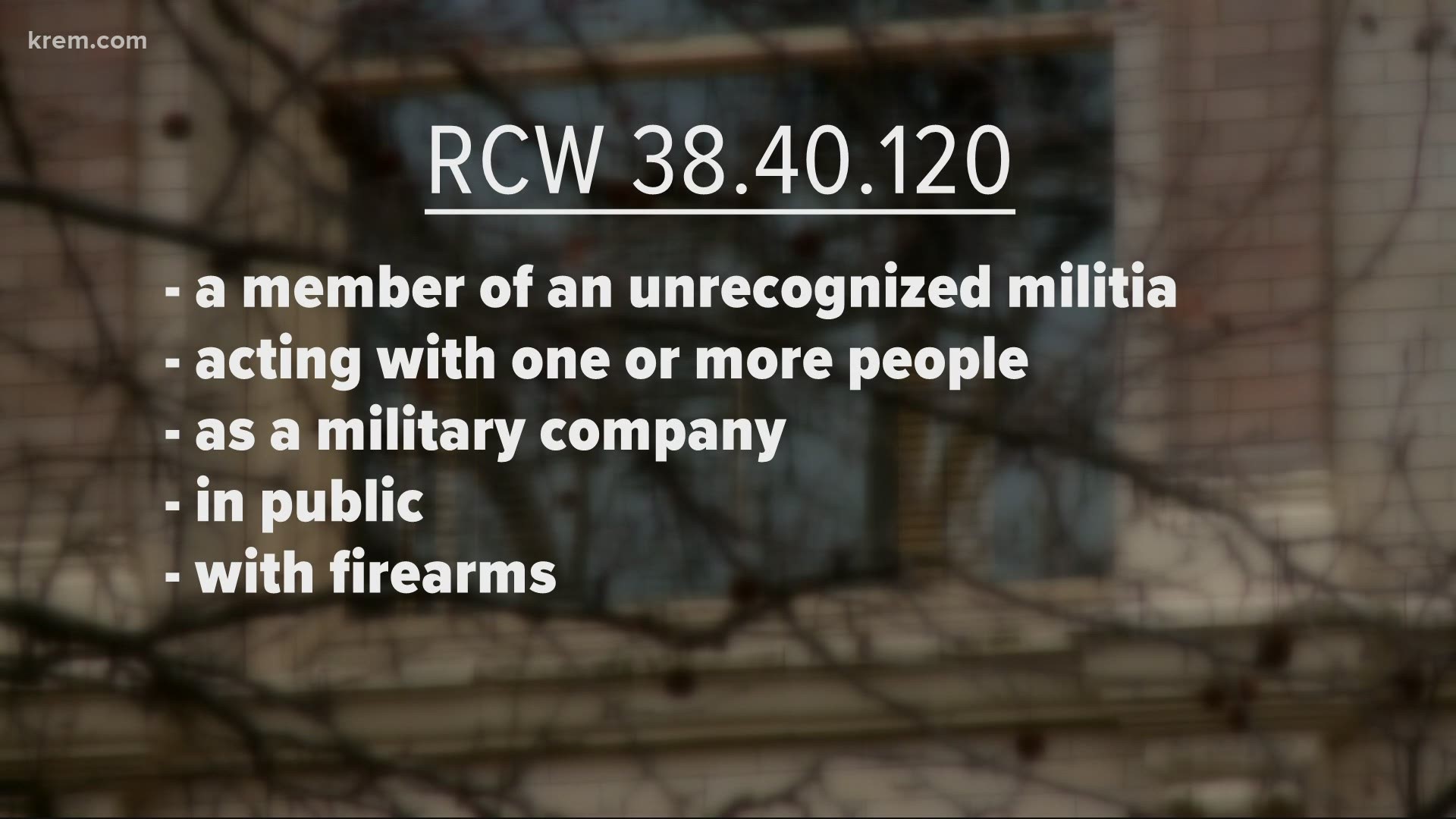 SPOKANE, Wash. — Spokane City Council members passed a resolution on Monday night that cracks down on armed militia groups following concerns that arose during protests for racial justice over the summer.

The resolution passed with a 6-1 vote. Council Member Michael Cathcart was the only nay.

The resolution condemns the groups, "reiterating that their presence and organization is unlawful" in Washington state and "clarifying that such groups have no sanction or commission of the City of Spokane," according to the city council meeting agenda for Monday, Nov. 2. The meeting is expected to begin at 6 p.m.

Before the vote, the Spokane Police Department said it was still trying to determine if the groups violate state law, while emphasizing that officers will continue to support citizens' right to open carry.

Councilmembers Kate Burke and Karen Stratton sponsored the resolution before the city council.

In June, a group of 16 elected officials in Spokane County released a joint statement condemning what they called "armed vigilantes" seen at several downtown protests follow the police killing of George Floyd in Minneapolis. The statement did not include signatures from representatives of the Spokane Police Department or Spokane County Sheriff's Office.

Owners of downtown businesses, including Auntie's Bookstore and the Globe Bar and Kitchen, also distanced themselves from the armed groups and asked them to stop gathering outside their locations.

John Waite, the owner of Auntie's Bookstore, previously wrote that he planned to ask the city to consider a ban on or the discouragement of open carrying downtown and public condemnation of armed militia groups.

"It drives away customers," Waite said. "People don't want to come down if they don't feel safe. We want a safe environment and we feel like we have that. We do pretty well down here. And having people, whether they have the right or not to carry guns around, is not something that helps our cause."

In the proposed resolution, city council members say the presence of armed militia groups at protests "appear to be in direct violation of state law."

The resolution cites a Washington law that says "no organized body" other than recognized militia organizations of the state, armed forces of the United States, military science students or veterans organizations "shall associate themselves together as a military company or parade in public with firearms."

The law does not prevent authorized parades by the organized militia of another state or armed forces of foreign countries. Anyone who violates the law could be charged with a misdemeanor.

In order to support a prosecution under the law, the investigation would need to demonstrate that a person is part of an "unrecognized militia" and was acting with one or more additional persons as a military company, or organizing or parading in public, and with firearms, according to Spokane County Prosecuting Attorney Larry Haskell.

The Spokane Police Department would need to establish probable cause on all of the necessary elements and forward it for prosecution, Haskell added.

The city council resolution also references Article 1, Section 24 of Washington state's Constitution, which is related to right to bear arms. It says the right for individuals to defend themselves should not be construed as "authorizing individuals or corporations to organize, maintain or employ an armed body of men." A state law related to "civil disorder training" is also included in the city council resolution.

Law enforcement in Spokane County is tasked with discouraging the appearance of private armed militia groups should they appear again and enforcing state law under the resolution. Council members are also requesting that the city attorney and prosecutor prepare for language to amend the city code in order to enforce the state laws in Spokane Municipal Court.

Spokane Police Sergeant Terry Preuninger said the law the council mentions in the resolution is not that simple to enforce.

“Let’s say I have that group of five, six or seven heavily armed people and they're standing on a street corner and I say to them, 'Are you members of a militia?' and they say, 'Yes.' Then I have to determine, is their presence, in and of itself, a violation of that RCW? Have they unlawfully come together as it could be interpreted in that RCW?" he explained.

"And is it safe and prudent and judicious for me, at that moment in time as a single police officer maybe two police officers, to say we're taking you to jail?” he added.

Julie Humphreys, a spokesperson for the Spokane Police Department, said in a statement that SPD "will continue to honor the Constitution of the United States, as well as state and local law, regarding persons carrying weapons in public." She added that Washington is an open carry state and "thus the presence of individuals carrying weapons is not a crime unless the weapons are used to specifically threaten an individual or group of individuals."

Officers have interacted with "armed individuals" at large gatherings in the past and "emphasized the desire for citizens to be prudent and judicious in their decisions regarding the carrying of firearms," Humphreys said in part.

"SPD is not seeking and has not sought assistance from armed citizens to help patrol large crowd events or protect private and public property," she wrote. "To the contrary, we have discouraged this practice, regardless of legality, for a myriad of reasons."

Humphreys said City Council President Breean Beggs has also asked Spokane Police Chief Craig Meidl to look into whether open carrying in organized groups violates Washington law. Beggs has provided Meidl with laws that he believes may apply and the police department expects that clarification is forthcoming, she added.

“We are unaware of any cities in WA State that have initiated charges under the given RCWs, and we want to ensure we are following proper legal guidelines in an area of law rarely used. Additionally citizens have the right to 'freedom of association,' 1st Amendment rights (which some have claimed the open carry is an expression of their rights beyond the 2nd amendment), 2* (sic) Amendment rights and the right to be secure in their persons and property without unlawful government intrusion. Those familiar with the intricacies involved in the multitude of competing interests will appreciate the complexities these types of laws can create as they apply to enforcement. Having said that, we stress in the strongest terms that we do not want nor need those with firearms in the vicinity of these protests. The presence of firearms from any participants elevate the emotions of attendees and is unproductive."

Leaders of downtown business organizations are also asked to refrain from calling on armed militia groups and to instead rely on law enforcement to "protect public property and safety," the resolution reads.

“There is a strong public policy interest against allowing private armed militia groups, which is that doing so undermines civil order, reduces the actual and perceived safety of all people, and sows distrust and undermines the public confidence in the sworn, uniformed women and men who serve our community as police officers by allowing private armed militia groups to take the law into their own hands or appear to do so by appearing in public as armed private groups," the proposed city council resolution reads in part.