A group of officers was seen posing with protesters while members of the crowd were gesturing with the "white power" hand symbol. 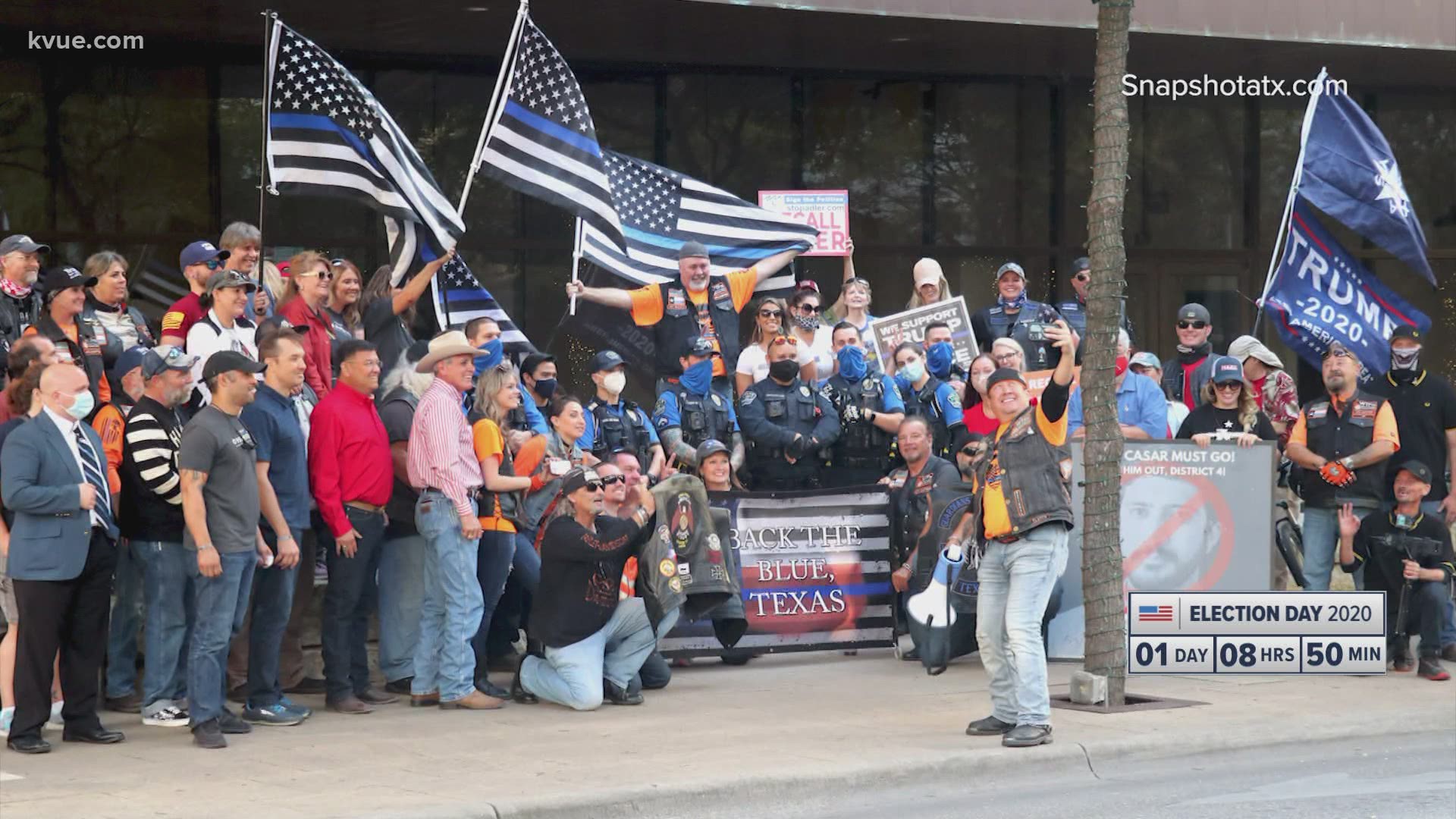 AUSTIN, Texas — Editor's note: The APD released an updated statement, stating that the Wind Therapy Freedom Riders were the sole coordinators of the event. The Texas Police Spouses Association were participants only.

A group that wants Austin Mayor Steve Adler out of office held a protest on Sunday.

And Austin police officers are now facing criticism for taking photos with the group, as some members of the crowd appeared to be holding up "white power" hand symbols.

"If these officers were aware of the behavior of those on the fringe of the group, there is no doubt in my mind that they would not have participated in the picture. The Austin Police Association and our members, including the pictured officers, condemn any type of racist behavior."

"Austin is not what it used to be," said protester Susan Spataro. "In the last 18 months, it has gone severely downhill in terms of public safety. People are concerned about affordability."

According to an event page for the march, the group gathered at 12:30 p.m. and traveled from Burger Stadium on Jones Lane, north on Lamar Boulevard up to Parmer Lane, then back down Interstate 35 to First Street, over to Congress Avenue up to the Texas State Capitol and over to San Jacinto Boulevard down to the Austin Police Department headquarters. There they showed support for "our brothers and sisters in blue." They anticipated arriving at APD headquarters around 3 p.m.

The group then proceeded to the W Austin on Lavaca Street, where they were to "further protest Mayor Adler." The group stated that there would be several keynote speakers from around the community who are running for public office.

The group said APD was notified about the planned demonstration.

"Mayor Adler has no response. He was out looking at new opportunities for getting people out of tents and into homes."

On Tuesday, the APD released the following statement:

"On Sunday, November 1, APD officers were working to provide a safe environment for a peaceful protest coordinated by the Wind Therapy Freedom Riders. At the end of the event, several officers, who we are working to identify, were asked to take a photo with participants which is not an uncommon request from the community.

"We are aware of the concerns raised by this photograph and have launched an Internal Affairs investigation to determine any potential violations. APD policies 801.6 and 972.4.1 address endorsements and political activity. We have specific guidelines, and all officers should be aware of these policies. As a reminder, we are sending a training bulletin to all APD officers and employees, to help remind them of our department policy.

"APD is committed to fair, impartial and equitable treatment of all people. We do not justify or condone political activities in uniform. Given the politically charged climate we will be advising officers to exercise additional caution when engaging with the public to ensure the uniform isn't used – either directly or inadvertently – to imply support or opposition of a particular perspective."