Spokane demonstrators on Sunday are chanting, “No justice, no peace. Defund the police,” and “When black lives matter, all lives matter.” 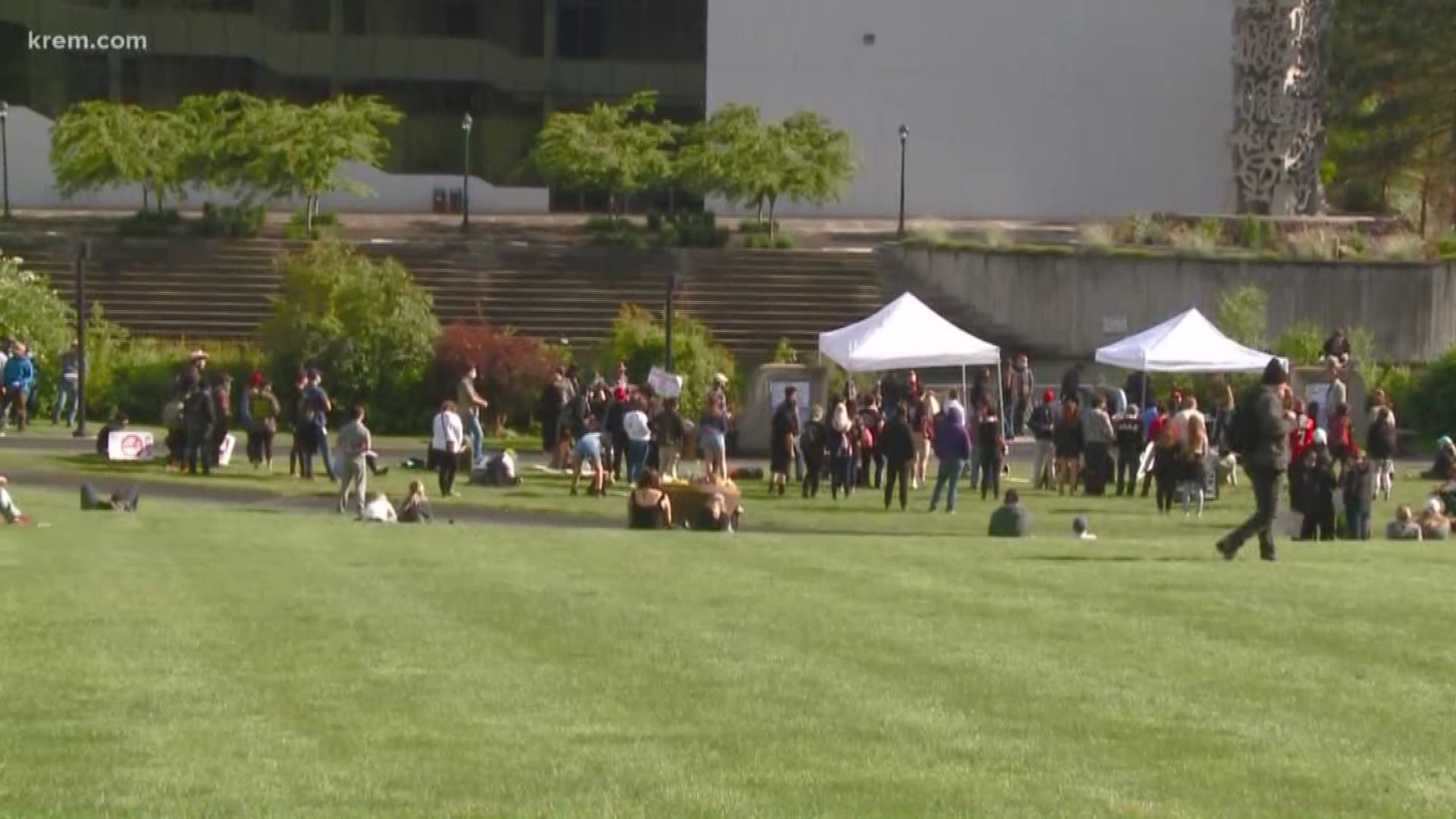 SPOKANE, Wash. — Hundreds of protesters gathered in downtown Spokane on Sunday afternoon in support of the movement to defund police.

They began their demonstration with speakers at Riverfront Park's Lilac Bowl at 2 p.m. A march through downtown Spokane began at about 4 p.m.

This is the third weekend in a row of Spokane protests against police brutality and racism. The crowd on Sunday, though, was smaller than that of past protests that brought thousands of people to the downtown area.

Demonstrators on Sunday chanted, “No justice, no peace. Defund the police,” and, “When black lives matter, all lives matter.”

“We won’t write one more check with your knee on our neck," protesters chanted in response.

Photos: Protest to 'defund the police' in Spokane

Spokane City Council President Breean Beggs has stopped short of support for defunding the police, but one proposal from council members does reallocate some money from the hiring of new police officers to the hiring of more social workers.

One speaker at Sunday's protest told KREM's Brandon Jones that she is encouraged by those who have worked to educate themselves about racism and implement change.

“I don’t think it’s any secret that Spokane is a primarily white town and a lot of the experiences I’ve had here have been colored by tinges of racism, whether intentional or unintentional," she added.

After weeks of regular demonstrations in Spokane, it's clear that protests against racism and police brutality aren't going away any time soon.

"What's different about this time is that people are ready for change," said Dustin Jolly, one of the Occupy Spokane protesters who helps organize events. "This can't be just lip service anymore, we need tangible, legitimate change. And we need that swift. And we need that now."

So what kinds of changes do protesters want, specifically here in Spokane?

Jolly says there are a couple of immediate goals, as well as a broader one.

One of the immediate objectives is rejecting the proposed contract between the City of Spokane and the Spokane Police Guild. It's up for a vote this month, but has received widespread criticism for its accountability structures. Specifically, opponents believe the contract leaves the ombudsman — the watchdog — too weak.

The list also includes prevention of the "Killology" training course from taking place. That's a seminar the Spokane County Sheriff's Office is planning to provide preparing deputies for if they have to shoot someone. The protesters argue it only enforces a focus on violence rather than protection by police.

The sheriff has said he'll consider calling off the training if there's still significant opposition after a community forum, but many just want him to cancel it now.

But ultimately, what most of the protesters are truly hoping for is a fundamental restructuring of the way policing works in Spokane.

"We want to convert our authoritarian police officers into peace officers," Jolly said. "Their training needs to consist of mental health training, as well as EMT training. And the authoritarian stuff that comes after that needs to be redesigned and reprogrammed. Because we need a police force with civilian oversight that is for the people, by the people."

SPD officers already are required to receive mental health training, but Jolly argues there needs to be more of it. All of these proposals are rooted in a desire to change the basic way people look at police: not as agents of force but of community service.

"When we look... at how a police officer is trained, we're only looking at a small amount of time that they go through training, and then we're putting a deadly weapon in their hand," Jolly said.