The move by officers and sergeants to disband their own team came a day after a team member was indicted. 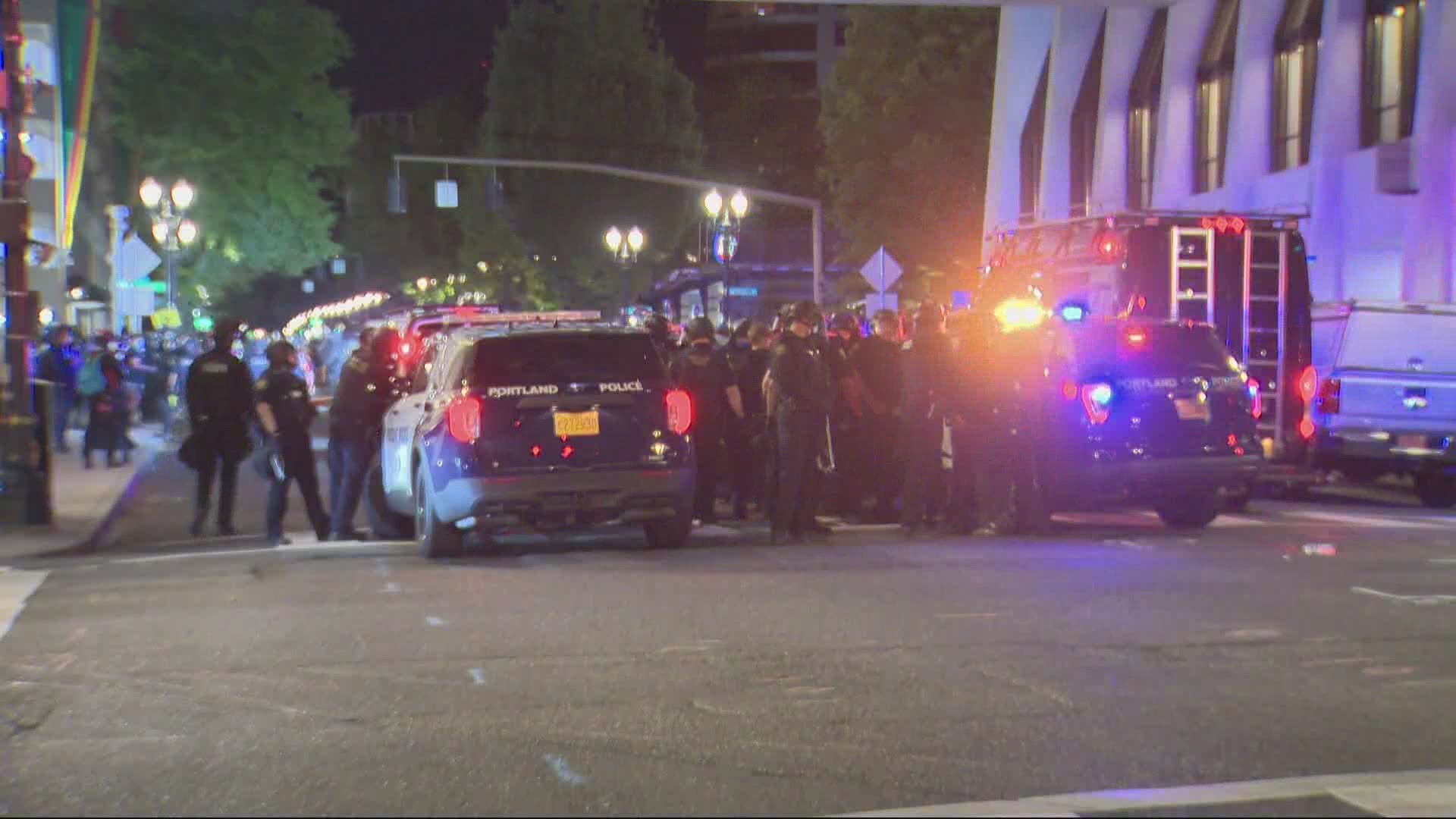 PORTLAND, Ore. — Portland police officers who serve on a specialized crowd control unit which has responded to the city’s ongoing, often violent protests have resigned en masse after criminal charges were filed against a team member.

The Oregonian/OregonLive reported the officers on the Rapid Response Team (RRT) voted to resign from the team during a meeting Wednesday night. Citing sources, KXL was the first to report on the move. On Wednesday, KXL Radio said Portland Police Association union executive director Daryl Turner warned in an interview on the "Lars Larson Show" that officers may resign.

"The reality is our dedicated RRT members have had enough and were left with no other alternative but to resign from their voluntary positions," Turner wrote in a statement released Friday.

The move by around 50 officers and sergeants to disband their own team came a day after a team member was indicted. He is accused of fourth-degree assault stemming from a baton strike against a photojournalist last summer.

The team has been on the front lines at social justice protests held in the city after the May 25, 2020 murder of George Floyd.

"They did not volunteer to suffer serious injuries, to be subject to warrantless criticism and false allegations by elected officials, or to suffer through baseless complaints and lengthy investigations devoid of due process," Turner said.

During a brief news conference Thursday, acting police chief Chris Davis said the police bureau will still have a plan in place to protect the community. A police spokesman said Chief Chuck Lovell was training out of state on Thursday.

"This does not mean that there will be no response in public order situations," Davis said. "We will use the resources that we have."

"In the short term we will have to find a way to adapt," Davis said.

When asked if he has any objections to the Multnomah County district attorney prosecuting Portland police officers, Davis said officers need to be held accountable, especially if they commit crimes.

"This is the culmination of a very long process, and it’s not just an indictment that caused this to happen," Davis said. "I think this has some very deep roots.

"I think it is a very long complicated history of things that have gone on over the last 14 months."

"If the Rapid Response Team members' resignation has highlighted anything, it's that the priorities of our elected officials have failed," Turner wrote.

The City of Portland has the personnel and the resources to ensure our community’s safety. I have directed the Portland Police Bureau to prepare mobile field forces to respond to any public safety needs, including potential violence related to mass gatherings. Also, I have spoken to Governor Brown, and the Oregon State Police is making members of its Mobile Response Team available on standby. We are also coordinating with other regional law enforcement partners.

“Management and staffing of the Rapid Response Team falls within the purview of the leadership of the Portland Police Bureau. I have confidence that the Bureau will continue their mission to maintain public safety. In the meantime, my office will continue to focus on the fair and just prosecution of criminal matters. We cannot expect the community to trust law enforcement if we hold ourselves to a lower standard.”

Earlier this week, for the first time in Portland’s history, an officer from PPB’s Rapid Response Team was charged with a misdemeanor for assaulting a photojournalist during a protest last summer. Ironically, we now see some PPB officers engaging in the act they showed so much disdain for last summer by staging their own protest: resigning from the RRT the moment there is a possibility for accountability for inappropriate and potentially illegal conduct.

We should expect our police force to act in a way we can stand by, but when they don’t we need to have accountability systems in place. When will PPB recognize this overwhelming desire for change and align their values with the people of Portland? It’s been reported that only 18% of PPB officers actually live in Portland. This needs to change. We need community safety that leads with the progressive values of Portlanders at large.

I remain deeply concerned these RRT resignations are yet another example of a rogue paramilitary organization that is unaccountable to the elected officials and residents of Portland.