The Wings of Rescue flight will arrive in Coeur d'Alene at 3 p.m. on Wednesday. Between 50 and 100 dogs – and a pot-bellied pig – will be looking for new families at KREM 2's Bark in the Park event. 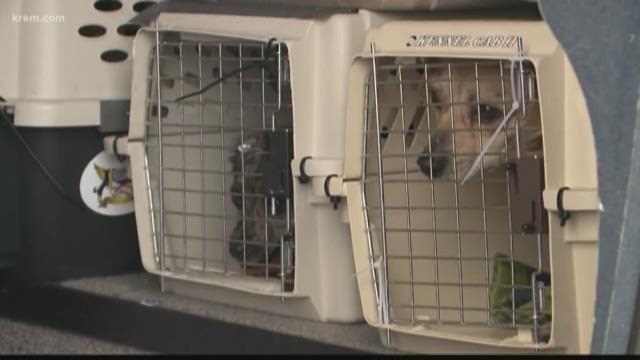 COEUR D'ALENE, Idaho — Wings of Rescue is landing in Coeur d’Alene on Wednesday with between 50 and 100 dogs – and a pot-bellied pig – looking for fur-ever homes.

You can adopt the pets at KREM 2's Bark in the Park event. It begins at 5 p.m. in Riverfront Park on. The park will be filled with dogs but you can also bring your own if it is on a leash.

The first 20 people in line get a ticket for free adoption but you will still need to buy your own pet license.

PREVIOUS: Bark in the Park is just a week away!

Lola is sooooo cute. She will be one of many dogs with @SpokAnimal for @KREM2 #BarkinthePark pic.twitter.com/cw2HcUem7H

Wings of Rescue has helped tens of thousands of pets in dangerous situations across the United States. When nature devastates an area or pets at overpopulated shelters face euthanasia, Wings of Rescue volunteers are quick to act.

“When there is a hurricane, tornado, and earthquake, fires, we will be there to provide help, moving the pets that are already in the shelters to make rooms for pets that are incoming – who are displaced by the storms,” Wings of Rescue president and CEO Ric Browde said.

Pets that are not neutered and spayed also pose problems.

“The southern states typically have the biggest problems because the pets are out procreating on the streets because they are left in people’s backyards all the time, so they have very high birthrates and then they flood the shelters,” Browde added.

Wings of Rescue anticipates it will fly at least 10,00 pets to safety throughout the United States in 2018. Browde said the Inland Northwest is always a special destination.

“We are sometimes convinced that there is a black hole somewhere in the middle of Spokane where you guys are hiding all the pets that we’ve brought up here. Since I’ve been with Wings of Rescue, I think we are over 5,000 pets between Coeur d’Alene and Spokane – that little corridor,” Browde said.

“You people can't keep a pet in your shelter to see if your lives because somebody comes in adopt them like three or four seconds later,” he continued.

The Wings of Rescue flight will arrive in Coeur d’Alene at 3 p.m. on Wednesday.

Wings of Rescue volunteers will also travel to 12 states over a three-day period due to the hurricanes throughout the U.S.