Trapping the big cat is part of a large research project based in Chewelah. 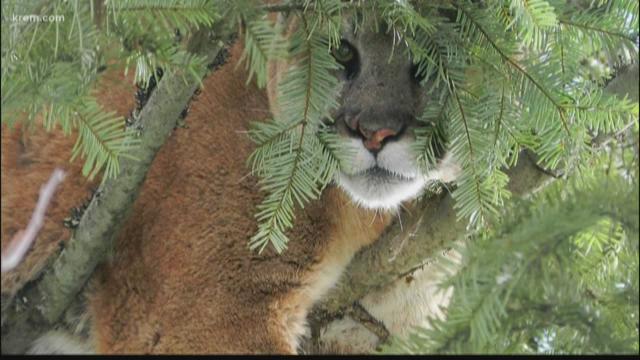 PEND ORIELLE CO., Wash. – The Washington Department of Fish and Wildlife tagged the largest cougar ever in Washington State. It weighs close to 200 pounds.

Trapping the big cat is part of a large research project based in Chewelah. Part of the project looks at the interaction between wolves and cougars that prey on deer and elk.

This giant cougar was found in Pend Oreille County on Monday. KREM 2 spoke to Brian Kertson, a Carnivore Research Scientist, about his big catch.

“You could tell he was a big cougar. A couple of the guys had got to the tree before I did. But then when I got up there, I did look at it and think, ‘Wow that’s a pretty big cat,’” Kertson said. “A hundred to 150 pounds is normal, he was 197.2 pounds according to the digital scale. I estimate him to be about 9-years-old.”

Kertson said the cougar was pretty extraordinary and they were excited to find him. He said there is a scar on the cougar's nose. Kertson said that is a sign the cougar defended its territory from another male cougar and won. KREM 2 also learned cougars run from dogs because of their interactions with wolves. He said a cougar can fight off one or two wolves but when there is a pack, they usually climb trees to get away.