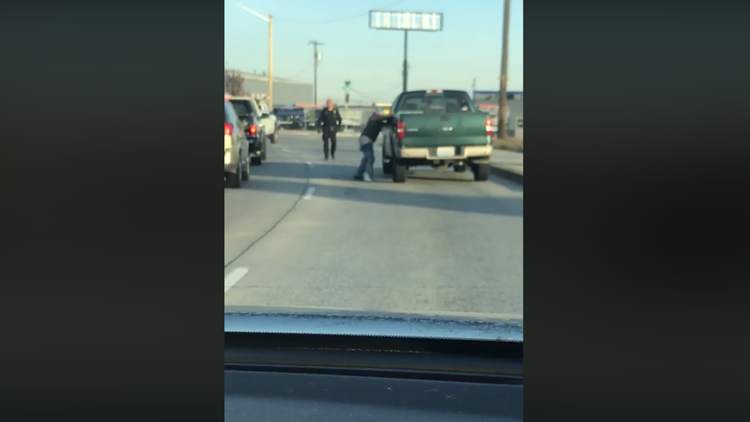 Warning: The video below contains language that some viewers may find offensive

SPOKANE, Wash. – A viewer video sent to KREM on Thursday morning shows a man who attempted to jump into cars near Spokane Community College.

Spokane Police Sgt. Terry Preuninger said the man was running from police in traffic near Desmet Avenue and Freya Street around 7 a.m. Officers had been sent to the area for a report of a car blocking traffic due to a flat tire. Dispatchers later realized the same car had been involved in a recent reckless driving calls in the area.

As back up officers were arriving the man jumped out of the car and started running through traffic, at times kicking at or trying to get into passing vehicles, Preuninger said. Officers tried to reach him but were unsuccessful.

Citizens who were watching the incident unfold called 911 to say the responding officer would need help with the situation.

Preuninger said as the man was running through the intersection of Freya and Desmet, he collapsed. Officers were able to detain him, placing him in handcuffs and medics responded, Preuninger said. Within a short time, the man appeared to be in medical distress. Officers uncuffed him and rendered aid until medics arrived.

Preuninger said it appeared that the man stopped breathing, medica took over and they took him to the hospital.

The man is still hospitalized and is in stable condition, Preuninger said.

Three primary officers responded to the incident, with additional officers assisting with traffic control in the area.

The video sent to KREM by Louis Di Mauro shows the man trying to enter two vehicles before running from police officers and falling to the ground in traffic.

Preuninger said there have been nine incidents between Nov. 4 and Nov. 7 where a vehicle matching the description of the man's vehicle on Thursday have been called into police for a suspicious person, welfare check or disorderly conduct. He added that the physical description given in many calls also matched the man’s physical description.

The man has not yet been charged with a crime.

Traffic in the area reopened around 10 a.m.

This story will be updated as more information is made available.