Hundreds of bikes and scooters were charred in the fire at a warehouse in Spokane Valley. Crews said the fire spread to two other area businesses. 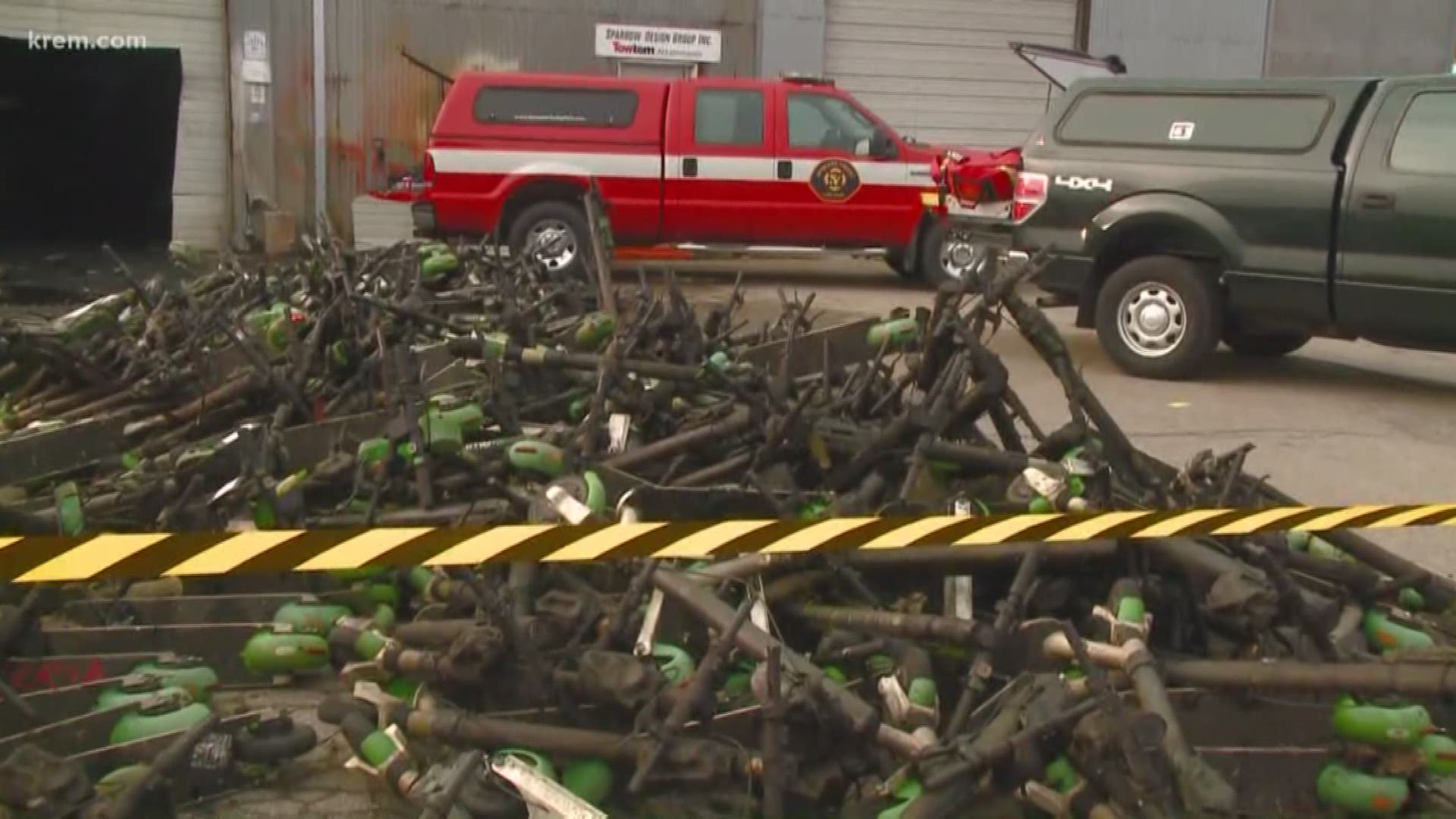 SPOKANE VALLEY, Wash. — Exploding Lime bike and scooter batteries likely contributed to a fire that was likely started due to an electrical issue at a maintenance warehouse in Spokane Valley on Sunday night.

Spokane Valley Fire Department spokeswoman Julie Happy said it was likely an electrical fire. She said an inspector determined that the batteries likely didn't cause the fire and that Lime's nightly charging process is consistent with the damage they saw.

Happy also said a power plate outlet box remained on and didn't trip during the fire. It is unknown why it didn't trip and batteries, plastic parts and paint contributed to the fire. An insurance company will now do an inspection.

About 150 Lime bikes and scooters were likely destroyed during the fire, according to a spokesperson for Lime.

“We’re in close contact with local authorities as we investigate what happened and are thankful no one was in the warehouse at the time or hurt during the incident," Lime wrote in a statement to KREM.

Spokane Valley Fire Department spokesperson Julie Happy said the department has not officially confirmed the cause of the fire, as the investigation is in its initial phases.

Investigators suspect that thermal runaway of a lithium battery contributed to the spread of the fire.

Lithium batteries explode when they heat up, so these types of fires can burn quickly if they are not contained correctly.

Though the fire department is unsure if the lithium batteries caused the fire, Happy says the scooters contributed to the fire’s intensity as they were housed in the same building.

SVFD Battalion Chief Jeff Bordwell said fighting the fire went "as well as could have been expected" and there were no exceptional challenges.

Scooters were taken out of the building once the fire sparked to prevent it from intensifying, Happy said.

Happy told KREM that riders should not be worried about Lime scooters or bikes exploding on the street since they are not using them in a hot environment. She added that normal conditions would not create thermal runaway.

"You really need that heat condition to ignite that battery. In a fire situation, that was a perfect situation for that to happen," Happy said.

Crews told KREM’s Nicole Hernandez on Monday that the building houses Lime bikes and scooters in need of maintenance when they are broken.

A woman employed as a Lime juicer says she starts her day at the warehouse to help deploy the bikes and scooters, adding that there were four that should have been in use on Monday. She added that scooters and bikes are also charged at the warehouse.

Firefighters responded to the report of a structure fire in the 5500 block of East Mallon Ave. at about 11:30 p.m. on Sunday. A 911 caller reported black and grey smoke coming from the building.

When an engine arrived at the scene on Sunday night, firefighters reported heavy smoke and fire at the warehouse.

Crews initially struggled to gain access to the property and dealt with free-flowing natural gas at the front of the structure, according to the Spokane Valley Fire Department.

Happy told KREM that a gas explosion did not cause the fire.

Crews told Hernandez on Monday that the fire spread to two other businesses to the east of the warehouse. Power was cut to the area but has since been restored.

A total of 21 firetrucks and command vehicles carrying approximately 50 firefighters responded to the fire. Crews with the City of Spokane Fire Department also helped fight the fire.

Fire crews do not have an estimate of the cost of the damages. The exact cause is still pending an investigation by the Spokane Valley Fire Department.

Happy said the results of the investigation should be available as early as Tuesday morning.

In August, video of a Lime bike spewing flames from the University of Washington campus in Seattle raised safety issues for the company.

A fire broke out at a Lime warehouse in the nearby Ballard neighborhood the same week.

In both incidents, the e-bike batteries caught fire, according to a Seattle Fire Department spokesperson.

Happy was unsure of any other fires in the Spokane area that sparked as a result of lithium ion batteries that caught fire.