Woodward announced the curfew shortly after it began on Monday night. The curfew goes until 5 a.m. on Tuesday and is in effect for part of downtown. 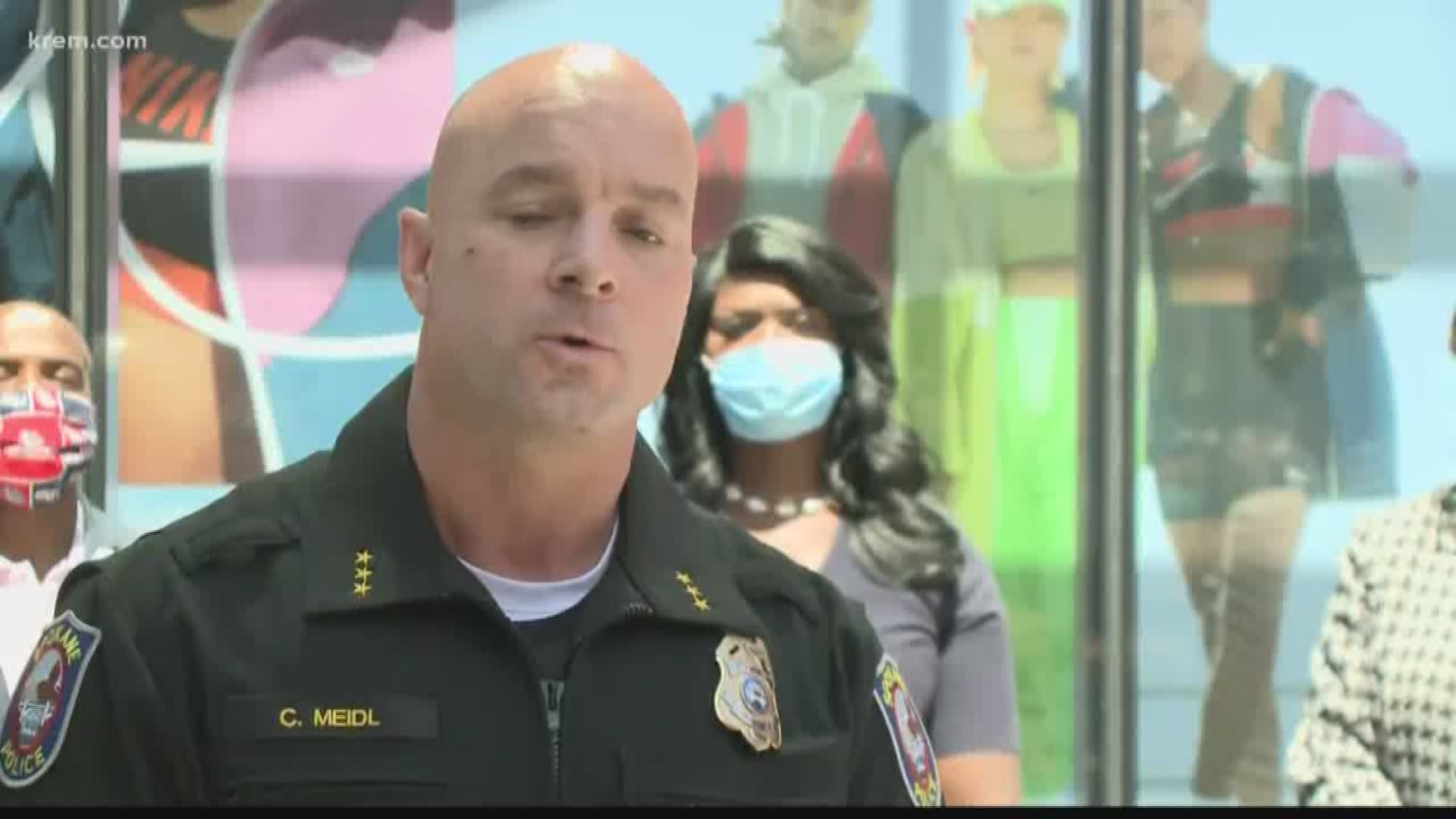 SPOKANE, Wash. — Spokane Mayor Nadine Woodward issued a curfew for part of downtown for the second straight night on Monday after protests and unrest on Sunday.

According to a release from spokesperson Brian Coddington, a curfew is in effect from 8:15 p.m. Monday night to 5 a.m. Tuesday morning. The curfew applies to Division Street to Maple Street and from Fifth to Boone Avenues.

The release was sent out about 7 minutes after the curfew was put in effect. According to the release, a group of protesters had turned aggressive toward motorists. Four were arrested Monday.

Woodward and Spokane Police Chief Craig Meidl gave brief statements on Monday night about the curfew. Woodward said it was in response to a gathering of about 70 people in Riverfront Park who were being unruly.

"We are following a situation in Riverfront Park by the red wagon, where it has been going on now for several hours, of unruly people, about ... 70 people, fighting amongst themselves, throwing rocks at cars going by on Spokane Falls Boulevard," Woodward said. "Our response earlier tonight is to prevent what we saw last night in downtown Spokane, where a number of our businesses had their windows broken into, the Nike store was looted, buildings were tagged unruly behavior and individuals who refused to follow police orders to disperse and leave the area.”

Meidl said multiple people were arrested at about 2 p.m. on Monday after harassing drivers. He also said people were seen armed and putting on body armor, and that people near the wagon in Riverfront Park were continuing behaviors seen last night.

According to a Spokane Police Department tweet, people were throwing rocks at vehicles, which led to the curfew.

Spokane County Sheriff Ozzie Knezovich said on Monday that Antifa groups are believed to be responsible for the civil unrest downtown on Sunday night.

Knezovich and Spokane County Commissioner Al French held a press conference on Monday after peaceful protests and civil unrest happened downtown throughout Sunday night and into the morning.

Knezovich said law enforcement was prepared for more unrest Monday night. He said that those who want to protest peacefully, which happened before the unrest on Sunday, would be able to do so, but those destroying property and being violent would be arrested.

"Lawlessness will not be tolerated in Spokane County, its just not going to be,"  Knezovich said.

As of 4:15 p.m., a small group had appeared outside of the Spokane County Courthouse, according to KREM's Taylor Viydo. A member using a megaphone was leading chants, Viydo said.

Knezovich also said the FBI was involved and investigating the involvement of groups from out of the Spokane area. However, he also called on Spokane Antifa to condemn what happened on Sunday night after the peaceful protests.

"If you’re so innocent, condemn it, because I don’t see any innocence here," Knezovich said.

The FBI also sent out a release on Monday asking for information on people who incited violence during and after the peaceful protest. Tips can be sent to the FBI's website or calls can be made to 1-800-225-5324.

Knezovich also asked Spokane County lawyers to look into possible civil lawsuits against those responsible. French added that the County Board of Commissioners would be looking at possible ways to help businesses damaged during the unrest.

Both Knezovich and French said they want people to know that the Spokane African American community were not behind the unrest, and that the actions of those who took part in the unrest damaged a peaceful message.

"The first thing I want to make clear is, this was not our African American community. It was not," Knezovich said. "They actually begged the people who did this not to do this."

The sheriff also condemned the death of George Floyd in Minneapolis, saying that law enforcement officers are taught to call for medical help as soon as a person says they can't breathe.

"We learned a long time ago, call medics. What happened in Minneapolis is inexcusable," Knezovich said.

He also said that law enforcement agencies around the Inland Northwest will also be present again Monday to help.

French took time during the press conference to thank volunteers that cleaned up garbage and graffiti from around downtown and from the Spokane County campus.

Both French and Knezovich thanked Governor Jay Inslee for the activation of the Washington National Guard in a quick manner, and said they are requesting more assistance Monday night.

"[We] are getting intelligence that they are trying to recreate last night tonight,"
Meidl said.

Meidl said there will be extra officers downtown tonight, and members of the National Guard will also be downtown and dispersed throughout other areas of the city.

He said the Proud Boys, Antifa and militias were all part of the group causing chaos in downtown last night.

Meidl also clarified that the group causing chaos in downtown Sunday night was not part of the group that protested peacefully Sunday afternoon.

Meidl said the police department had intelligence that "antagonists" were planning on coming to the protest with the intent to provoke police officers into a confrontation.

Prior to the rally, Meidl said officers saw groups bringing in jugs of water and milk, as well as baseball bats, clubs, and an umbrella with a large spike on the end, prompting the department to bring out more officers.

The chief said they believe the group has experience causing riots and disorder.

The rally was initially peaceful, aside from one person trying to start fights in the crowd, and a small group throwing rocks and spraying officers, according to Meidl.

"The sea of people there looked like Spokane," Wilkerson said. "It was so diverse and it was unified. The rally was amazing, I stayed until about 5 and then I saw what was going on."

Come evening, the protest had migrated downtown, with protesters walking the streets until one group began breaking windows and looting the Nike store.

"My grandparents, my parents and I have seen rallies all my life," Wilkerson said. "And nothing is different."

Kurtis Robinson, President of the Spokane chapter of the NAACP, said the protest was "hijacked."

"That is not our Spokane," Robinson said. "That is not the Spokane we need to see and that we want to be."

Mayor Nadine Woodward also spoke at the conference, and condemned the group that destroyed property downtown.

"That is not Spokane, that is not who we are," Mayor Woodward said.

Woodward went on to praise many of the citizens who came out Monday morning to help clean up the city.

"Who we are returned this morning to clean up our city, to show our community what we are," Woodward said. "What an incredible, incredible thing."