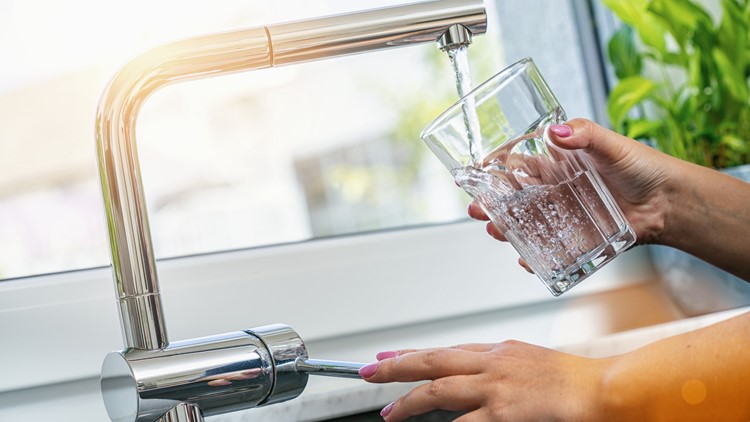 Photo by: Getty Images/iStockphoto
ideal for websites and magazines layouts

POST FALLS, Idaho — Water has since been restored to all Post Falls customers who had their water shut off on Thursday night.

According to the City of Post Falls Facebook page, water was shut off from Williams Street to Idaho Street and Mullan Avenue to Seltice Way as of about 5 p.m. The post didn't list a reason for the shutoff.

According to Post Falls City Utilities Manager Craig Borrenpohl, the water shutdown was caused by a water main breaking and shooting water near a power line.

"There was water shooting 15 feet in the air near a power pole, so that required us to act pretty quickly to try to minimize the amount of [people] shutdown, but to get it shutdown to make sure that infrastructure wasn’t damaged further by the break," Borrenpohl told KREM.

The break was likely caused by the freeze-thaw cycle, he said. Breaks are more likely to occur where there is no snow covering the ground when it freeze, as snow acts as an insulator.

He said the problem was likely compounded by old infrastructure.

"It very likely was a combination of aged infrastructure and then the cold temperature," he said. "So, quite often if we go into a cold snap, something may freeze, but its not until it actually thaws out that sometimes it surfaces. So that’s likely what happened."

Borrenpohl estimated that 20 connections, both commercial and residential, were affected by the shutdown.

Borrenpohl said the city has been trying to replace infrastructure in an attempt to mitigate the risks of line breaks like the one on Thursday.

He said the city has a maintenance program aimed at finding and replacing old lines or lines that may be at risk of freezing and breaking. One example he gave was a replacement in downtown Post Falls during the summer of 2019.

"Just this summer, we replaced a section of pipe that wasn’t as deep as it should have been and was somewhat subject to freezing," he said. "We replaced that with a larger line and placed it a little bit deeper in our downtown area. So we keep taking steps to try and reduce the freezing incidents and the line breakages, but it is always a risk."

Resident says water was shut off without notice

Vanessa Christensen, a Post Falls resident who lives on Mullan Ave., said her water was shut off with short notice.

"We were sitting at home around 4 or 4:30 p.m., and we got a knock on the door, and there was actually a city worker who came to our door, and just said, ‘Hey, the water is going to be shutoff in 30 minutes,'" she said. "And we just said, we asked why? They didn’t really give us any reasoning as to why or, we asked, ‘When is it going to be turned back on?’' And they were like ‘We don’t know’.”

She said the water actually was shut off about 10 minutes after the worker came to her house, not 30 minutes. Christensen said they were also given "no information at all" about the shutoff or when the water would be back on.

Borrenpohl said the city sent a few people, including himself, to go door-to-door due to the short notice of the water being shutoff. Not everyone could be reached in time, he said.

"This was unplanned and it was due to a main break, it necessitated us to do that [inform people] on a quicker basis," he said. "We did try to send staff around to contact as many people and businesses that we could quickly. But ... people don’t always answer their door anymore, so we got as many people as we could, but the messaging is always going to be a challenge when we have to do an emergency shutdown.”

He estimated that the city was able to inform about 75 percent of those affected.

When the city has a planned outage, crews put tags on the doors of those who are going to be affected to inform them in advance, Borrenpohl said.

To deal with the lack of water, Christensen's family turned to the snow covering the ground.

"We have three kids so, flushing the toilet is an issue. Just like brushing your teeth and stuff," she said. "Yeah, it's a pain. We've been boiling snow, we got snow going in a crock pot too for the toilet and what not."

Borrenhpohl said the city appreciated the cooperation of those who lost water as crews worked to fix the line.

"In general, we appreciate the cooperation, and tried to act quickly to minimize the time that stuff was off in the area that was impacted," he said. "We try and address the problems as soon as we’re made aware of them, and sometimes that requires just a bit of patience, but we appreciate that.”

RELATED: Putting snow in North Idaho roads could land you in legal trouble