Seven people have filed lawsuits against Amtrak and BNSF Railways over the deadly train derailment that happened Sept. 25, 2021, in Montana. 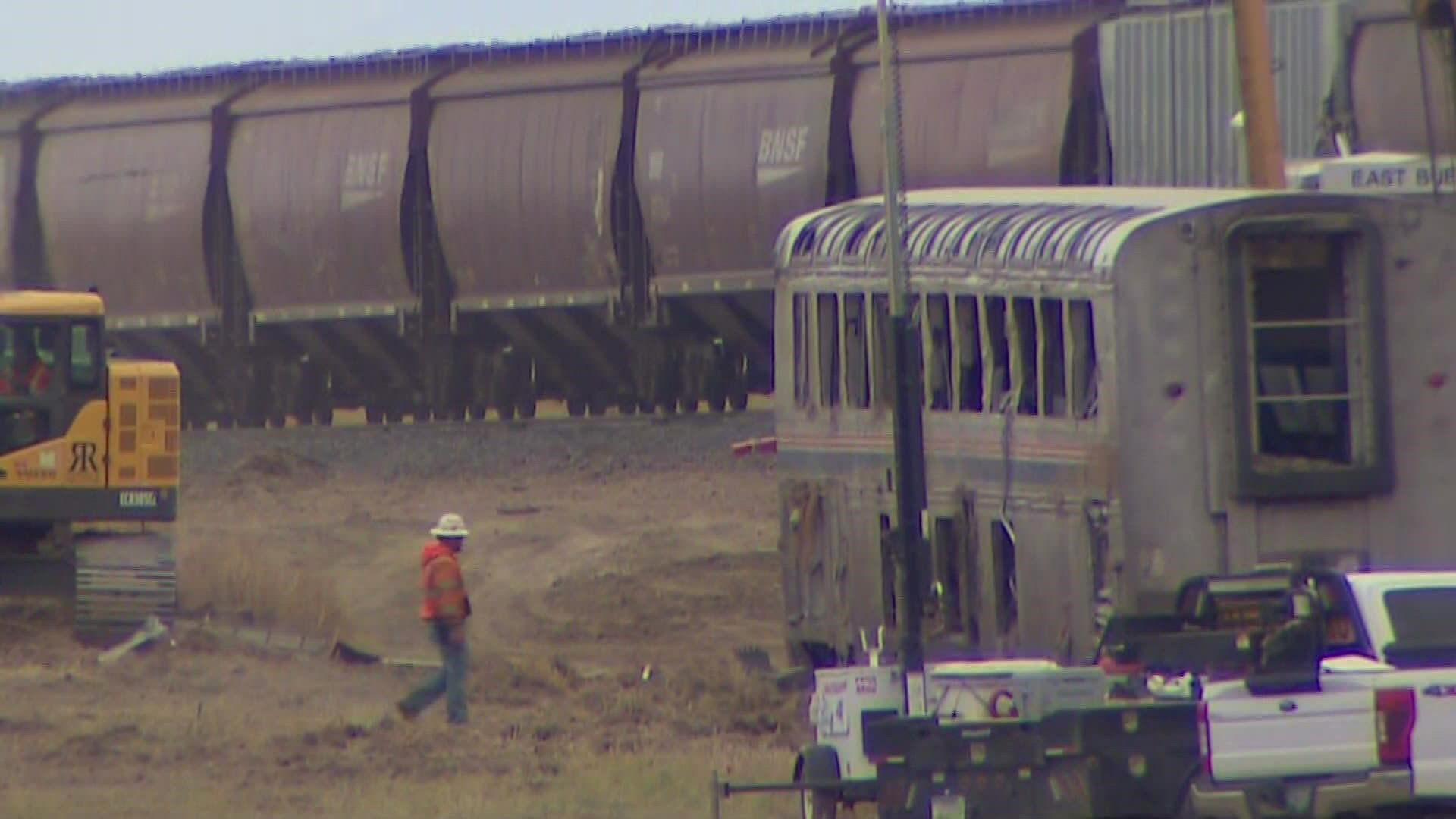 CHICAGO — Seven passengers injured when an Amtrak train bound for Seattle derailed near Joplin, Montana in late September are suing the corporation, as well as the BNSF Railway Company that owns and maintains the tracks.

Amtrak's Empire Builder line was headed from Chicago to Seattle carrying 157 people, including 16 crewmembers, when eight of the 10 cars derailed on Saturday, Sept. 25. Three people were killed and dozens more injured.

Representatives from the Clifford Law Offices, based in Chicago, announced Monday that lawsuits had been filed in federal district court in Chicago on behalf of seven injured passengers and it anticipates filing more in the near future.

The complaints allege negligence on the part of Amtrak and the BNSF Railway Company including improper, inadequate and insufficient rail maintenance, switches and train equipment, according to a statement from the Clifford Law Offices.

The cause of the derailment remains under investigation by the National Transportation Safety Board.

The law firm said the lawsuits were filed on behalf of a Massachusetts couple, a Pennsylvania couple, an Indiana couple and a man from Montana, all who were physically injured in the derailment.

This isn't the first time an Amtrak train has derailed. In 2017, an Amtrak train on its first paid passenger run from Tacoma to Portland, Ore., derailed near Olympia sending rail cars plunging onto Interstate 5. Three people were killed and 10 seriously injured in that derailment.

The same Clifford Law Offices obtained millions in settlement money from Amtrak on behalf of the passengers who were victims in the 2017 derailment.

Following the 2017 derailment, Amtrak in 2019 instituted a new Arbitration Agreement, which is printed on the back of tickets and states passengers cannot sue the corporation for things like personal injuries, physical impairments, or wrongful death, among other things. Instead, those claims get decided by a single arbitrator, rather than by a judge or jury.

In its statement Monday, the Clifford Law Offices said it intends to challenge that arbitration requirement that is "allegedly applicable to passengers."

Ryan and Hanna Shea, both in their 30s, from Massachusetts, were traveling to see family in Seattle on their first train trip when the rail car they were in derailed. In a statement released by the Clifford Law Offices, the couple described why they decided to file a lawsuit.

"This isn’t the first time that an Amtrak train has derailed or crashed, causing physical and psychological harm to its passengers. We’ve learned since the incident that the central action Amtrak has taken after the last fatal derailment has been to add a mandatory arbitration clause to its purchase agreement," the couple wrote in part. "When you put your safety in the hands of major corporations like this, you don’t want to know that they are preemptively trying to block your paths to recourse should the worst happen. But that's the truth... We hope that it is through our lawsuits that rail will again be a trusted way to travel, and that Amtrak will admit the mistakes it made here and do the right thing. The status quo is obviously not safe enough. Amtrak needs to focus on how to make rail travel safer, not how to save money when a disaster occurs."

Amtrak issued the following statement Tuesday regarding the derailment and the lawsuits: "We are deeply saddened by the loss of life and injuries due to the derailment of the Empire Builder train on Sept. 25 , near Joplin, Mont., on BNSF railroad. It is inappropriate for us to comment further on pending litigation."

The BNSF Railway Company told KING 5 it does not comment on pending litigation.

Download our free KING 5 app to stay up-to-date on news stories from across western Washington.