City council president Ben Stuckart said the contract with the church was under $50,000 so it didn't require legislative action. 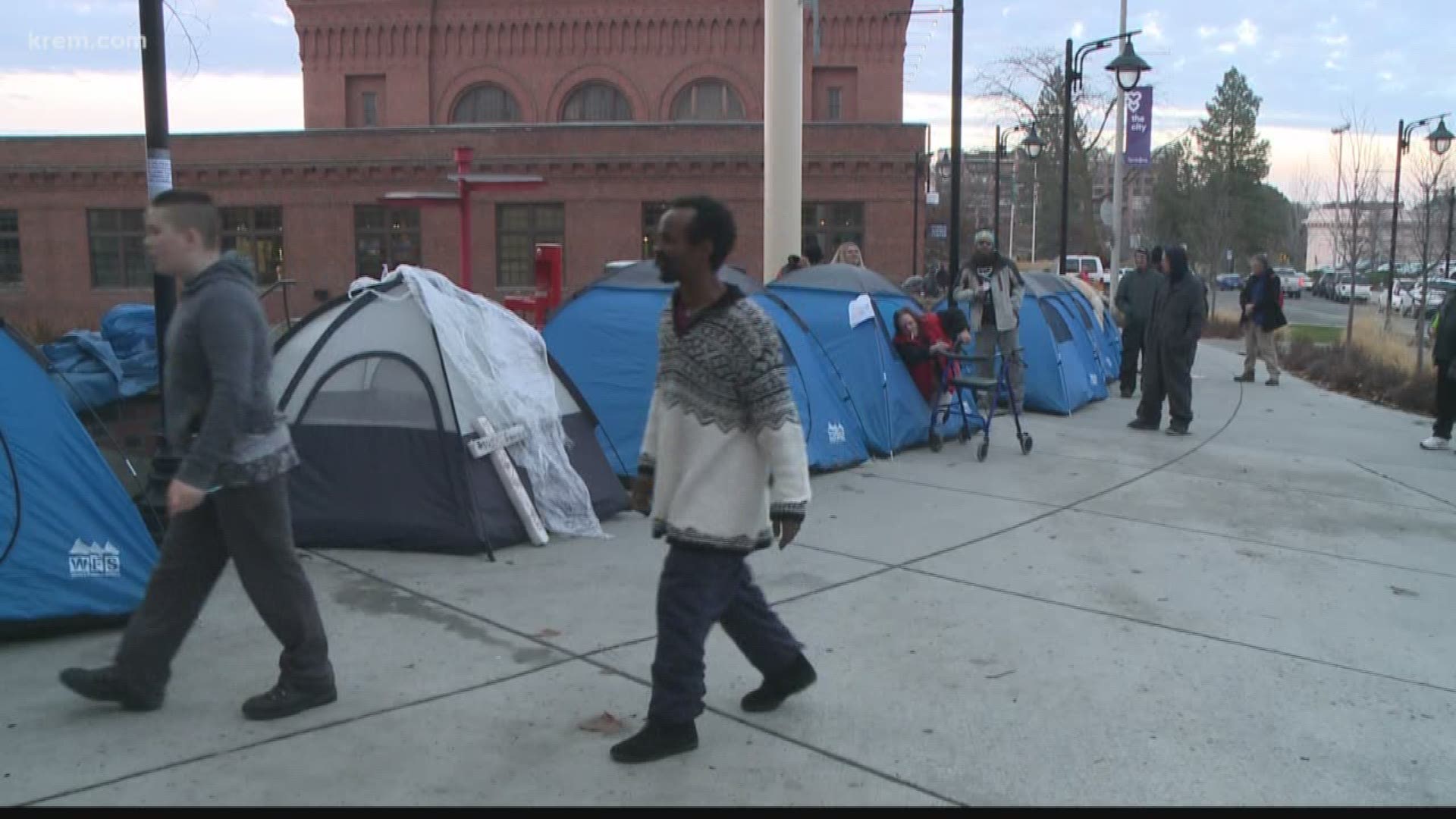 Spokane City Council canceled a special meeting Thursday afternoon to consider an emergency budget ordinance for warming shelters. Although the council meeting was canceled, many councilors held an impromptu, informal dialogue with demonstrators.

For an hour in the City Hall Executive Briefing Room, council members, city staffers, community activists, and some of the people currently camping outside the building brainstormed solutions. The discussion largely focused on ideas for long-terms housing, and was by most accounts productive – at one point even erupting into applause.

City spokeswoman Marlene Feist told KREM Wednesday the city council could approve a contract that would create 50 or more warming shelter spaces for men during the Thursday meeting. The meeting was supposed to be held at 3:30 p.m. in the city council briefing center.

Then on Thursday afternoon, city officials said they were able to use already existing funds to secure an additional 40 warming center spaces at Salem Luthern Church.

The church later told KREM it opened its gym and will provide 60 spaces for people to take shelter.

This still does not reach the 200 total additional spaces needed to lift the temporary suspension on the sit and lie ordinance, which prevents homeless people from sleeping on city streets.

Feist said this isn't the final contract and the city still has more sites in the works.

City council president Ben Stuckart said the contract with the church was under $50,000 so it didn't require legislative action.

Some demonstrators still showed up for a planned "Community Vigil for the Homeless." Organizers asked people to show their support for the homeless population's needs at city hall.

The meeting announcement comes after protesters formed a barrier around homeless residents' belongings at city hall on Monday amid fears that police would remove the belongings, and then erected about two dozen tents in front of city hall on Wednesday as temporary shelter for the homeless due to a lack of shelter space.

RELATED: Homeless advocates: 'It feels like the city is bailing on people'

The city has suspended a sit-lie ordinance that prohibits people from sitting or sleeping on city streets, until more shelter beds become available.

About two dozen brand new tents were set up in front of Spokane City Hall on Wednesday morning in response to a lack of shelter beds. Homeless residents said they will leave the area once adequate shelter space is available.

The city put down a tape border to make a clear path for employees to come and go from the building. Feist said no major incidents have happened since people set up camp outside city hall.

In a Facebook Live Q&A on Thursday, Spokane Mayor David Condon said encampments like the one in front of city hall pose a public health issue and lead to crime. He promised to clean trash out of the camps but also said the city would offer services to homeless residents staying there.

“We make sure we have outreach teams that go to these encampments to connect people with services," Condon said.

Condon said on Thursday that Spokane is one of 17 cities across the U.S. selected for a Housing and Urban Development EnVision Center. Condon said this is a single location where homeless residents can access services, housing, healthcare and job support.

In addition, Condon discussed city services available for homeless residents, including the "Give Real Change" and "Hope Works" campaigns. In May, $15,000 had been raised for shelters and part-time employment for those struggling with homelessness.

The Give Real Change campaign includes orange parking meters throughout the city where you can donate to end homelessness.

“Hope Works” is a program available that “gives dignity through work,” Condon said in May. A social worker picks up homeless individuals who want a work experience and they then get paid a stipend for their work.

Residents can also call 211 if they are in need of help or 311 if they would like to give help. 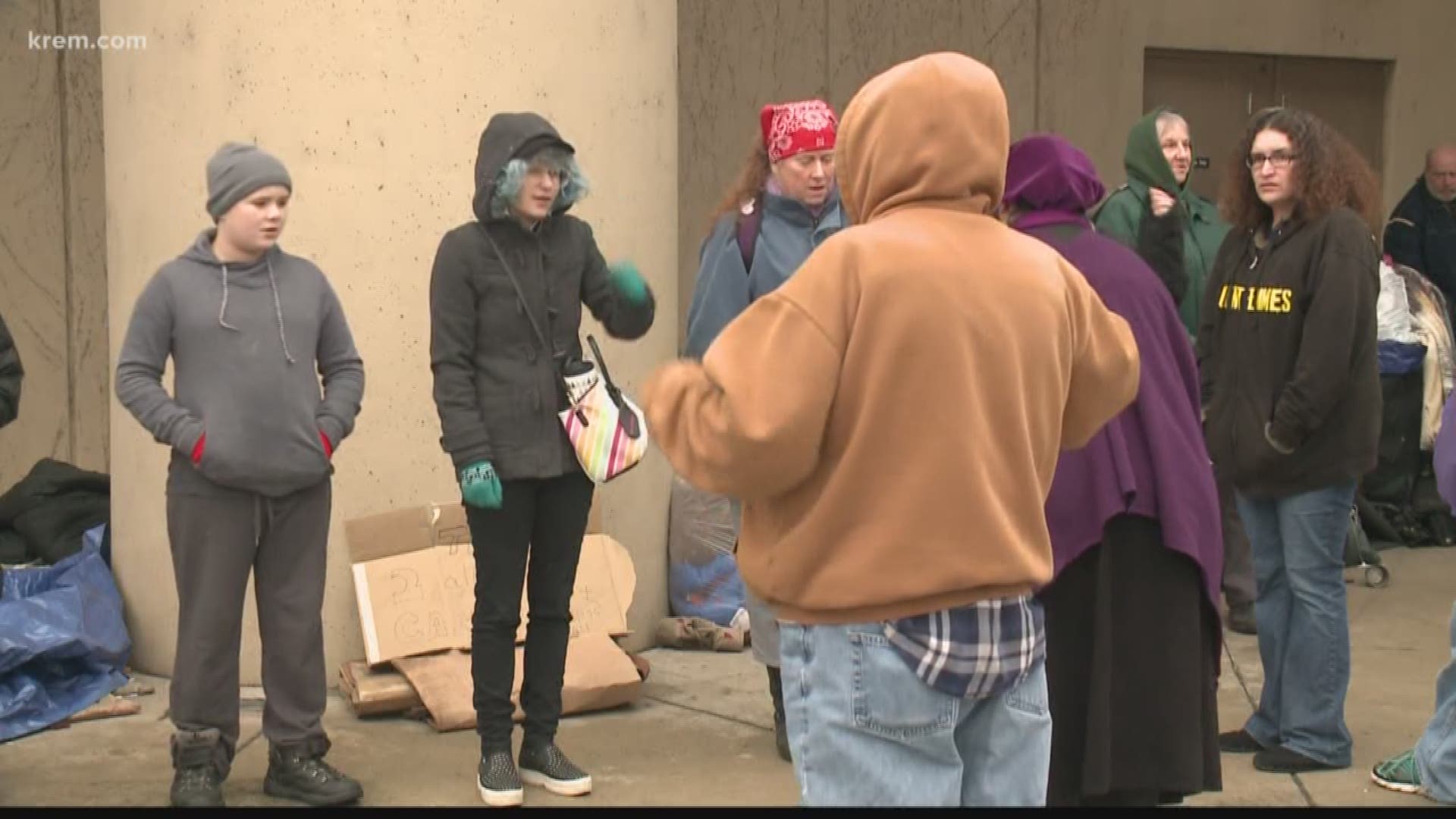