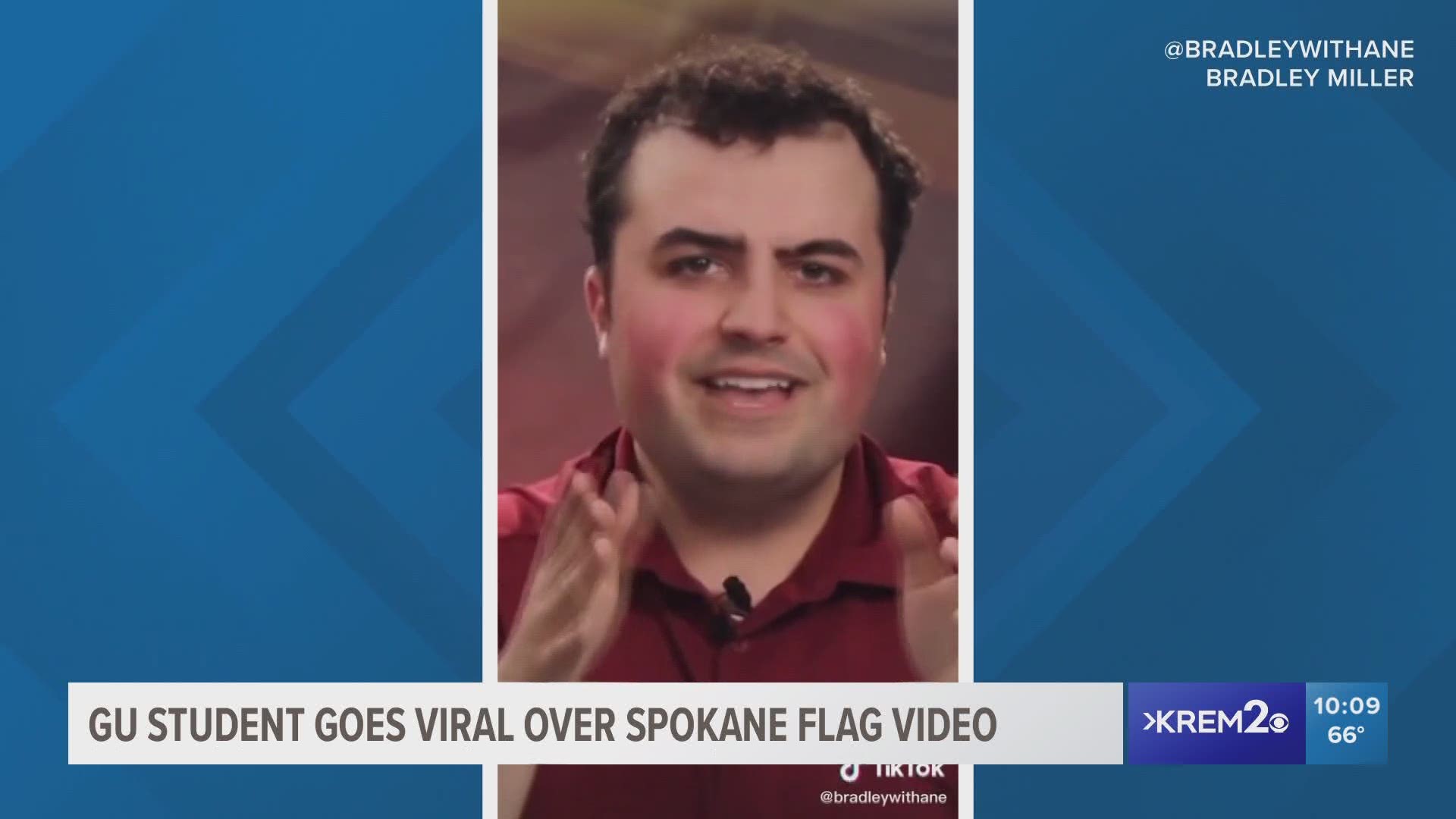 SPOKANE, Wash — "I created a show at my college just so I could trash talk the city of Spokane's flag check," says Bradley Miller in the sing-song voice signature to "check" videos on TikTok.

It's the opening line of his one-minute video that has surpassed 200,000 likes and one million views.

Miller is a rising senior at Gonzaga, and he was researching topics for an assignment when he came across the official flag for the City of Spokane.

"I looked it up, and I saw that it didn't look good," he told KREM. "It looked very bad in my opinion."

He thought the bad flag would make the perfect target of a comedic rant for the GUTV show he's part of. It's called The Updog, and it's structured sort of like The Daily Show.

City flag design has become something of a popular topic ever since podcast host Roman Mars gave a TedTalk on it back in 2015.

"I think anyone who watches that is immediately interested in flags and the design of it," said Miller.

In the episode, Miller tears into the flag design, mocking its unoriginal use of color, bizarre stick figures, and gaudy text.

He points out the 31-star sun and notes that it's included because "Spokane" is commonly understood to translate from the Spokane Salish dialect to "Children of the Sun."

"It would be nice symbolism if “Children of the Sun” wasn’t blatantly written in Times New Roman font inside the white circle," Miller scoffs in the video.

Months after recording the episode of The Updog, Miller was in dire need of content to upload to TikTok, where he has tens of thousands of followers.

"I [was thinking] this is the end of my TikTok, no one's watching my stuff, I'm losing followers," he said.

He clipped part of his flag statement, added the "check" line, and posted it. Within a few days, the video had gone viral. Viewers around the world were fascinated by the horribleness of Spokane's flag and with Miller's take-down of it.

"I was also really surprised with how many people in Spokane specifically had seen it," Miller said. "I was really shocked to see [people reaching out saying] 'hey, I’m in Spokane, I didn’t know we had this flag!'”

Miller says he particularly dislikes the large text across the bottom-right of the flag that states bluntly: "City of Spokane."

"About half of the 'design' if you want to call it that is dedicated to the phrase 'City of Spokane,'" he says in the TikTok. "I mean, in their defense, nothing says 'Spokane' like a flag that says 'City of Spokane.'"

He's not the only one who thinks the flag needs some work. Last year, Spokane City Council Member Kate Burke launched a new commission to replace it.

They've been having regular meetings since. Soon, they may start taking submissions from the public.

"I'm happy that we're getting a new one," said Miller.

He says of the designs he's come across so far, he's a fan of a classic.

"I was looking up old flags, and we had a flag from the 1920s that looked awesome," he said.

That design likely will be considered by the commission. But until they receive submissions, make a recommendation, and have it approved by the city council, Spokanites will have to live with stick figures and an awful lot of text.