Gonzaga students in Florence, Italy make plans to return to the U.S.

Students who were in Florence, Italy are being asked to self quarantine for 14 days upon their return and to self-monitor for symptoms of COVID-19. 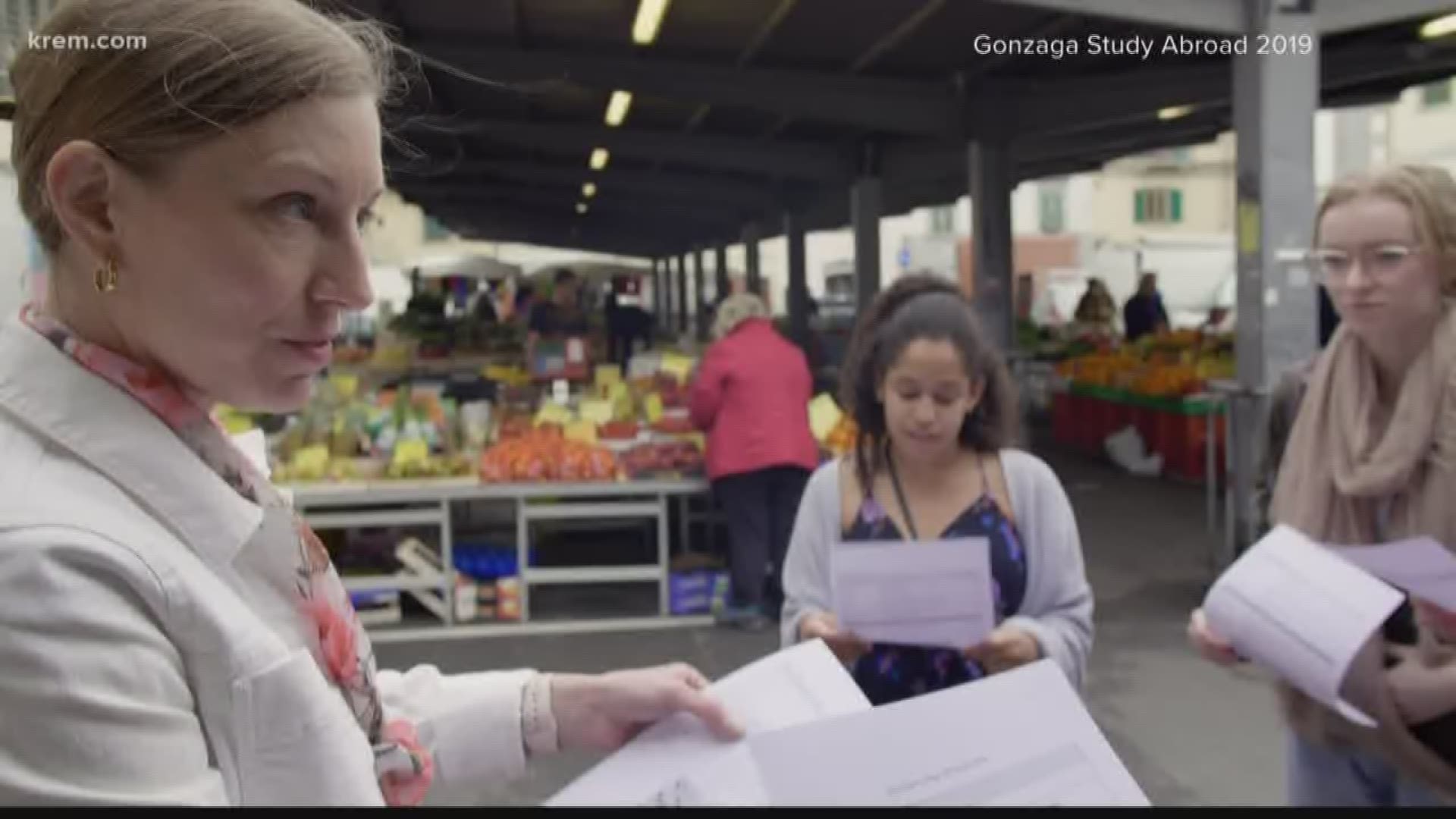 SPOKANE, Wash. — The Spokane Regional Health District is advising Gonzaga to tell its students who were in Florence, Italy to self quarantine for 14 days upon their return and to self-monitor for symptoms of COVID-19.

Health district officials said if the students begin to feel ill, they are advised to remain home and call their health provider for further direction.

The university suspended all academic courses on Wednesday for the students enrolled in the program over a coronavirus outbreak in Italy. The students are not allowed to return to campus.

The Center for Disease Control announced that Italy has moved into a Level 3 Travel Alert Friday. This means travelers should avoid all nonessential travel to Italy.

Europe has recently seen an increase in cases, with Italy being the hardest hit. Italy has 900 confirmed cases out of 621 in Europe, and also has accounted for 14 of the continent's 16 deaths.

Twelve people have died in Italy.

The World Health Organization says there are 443 cases of the virus in Europe, including those confirmed in Italy.

All pensiones and home stays will be closed for the remainder of the spring semester on March 6, 2020, according to the university.

“For the safety of our students, faculty and staff, we made the difficult decision to suspend the program,” said Deena González, provost and senior vice president. “Along with a number of other American universities with programs in Florence, we are concerned that by remaining in Florence, our students are at risk for in-country quarantines, limitations on travel, and limited access to basic services.”

Two GU students studying in China also returned to the United States earlier in the semester, according to the university. The school said 161 students are taking part in the program. They are from all over the country.

Gonzaga leaders did not say whether students returning from Italy will be tested for the virus and referred people to local public health officials, who have not responded to KREM’s inquiry about testing of the students.

University leaders also said Gonzaga-in-Florence staff will pack up belongings of students and ship them home at a later date upon request.

Richard Menard, who serves as the director of Gonzaga's Center for Global Engagement, said the university's decision is based in part on the fact that the first cases of coronavirus were reported in Florence on Tuesday.

Gonzaga leaders also looked to other schools throughout the country that were suspending their study abroad programs in Florence, Menard said.

Menard said Gonzaga has not asked student to return home from Florence since the first Gulf War in the early 1990s.

The university's Emergency Management Team is in contact with the Spokane Regional Health District, and the university's Health and Counseling Service Team is taking precautions to identify any potential cases as early as possible.

“We know this is a great disappointment to our students and we are doing everything we can to minimize disruption to their studies and their lives,” González said. “It is also important to provide a plan for academic continuity for our Florence students.”

University leaders said they anticipate providing students with plans for continuation and competition of their academic courses in early March.

WSU advising students in Italy to return to U.S.

Washington State University is asking students in Italy to return to the U.S following the Level 3 travel advisory issued Friday, according to the school's director of global learning.

Those students do not have a deadline for when to return home.

"Most communication at this point will be with the program providers to arrange for departure and to make arrangement to either end or extend coursework from a distance," said WSU Director of Global Learning Kelly Ann Newlon.

On Thursday, the university encouraged students there to return to the U.S. and complete their semester studies online. They were not requiring that they leave. On Friday, the school told students to self quarantine upon their arrival in the states.

Spokesperson Phil Weiler said 79 students are studying abroad in the country, with some in northern Italy.

Dave Meany, a spokesperson for Eastern Washington University in Cheney, said EWU does not have students studying in Italy this quarter and no study abroad programs have been impacted by coronavirus outbreaks so far.

The University of Washington has nearly 100 students studying in Rome, Italy. They are not asking students to come home and they are not considering suspending the program.

The school is asking anyone who develops symptoms after returning from personal or official travel to a country with a COVID-19 outbreak to connect with their health-care provider and also report to the appropriate contact at the UW.

There are no confirmed cases of coronavirus in Spokane County. Four patients with the virus are receiving treatment in isolation rooms at Sacred Heart Medical Center.

The Centers for Disease Control and Prevention told The Associated Press last week that the patients were passengers on the quarantined Diamond Princess cruise ship in Japan.