An officer at the scene when Chauvin knelt on George Floyd's neck for more than 9 minutes expressed concern about "excited delirium." But what does the term mean? 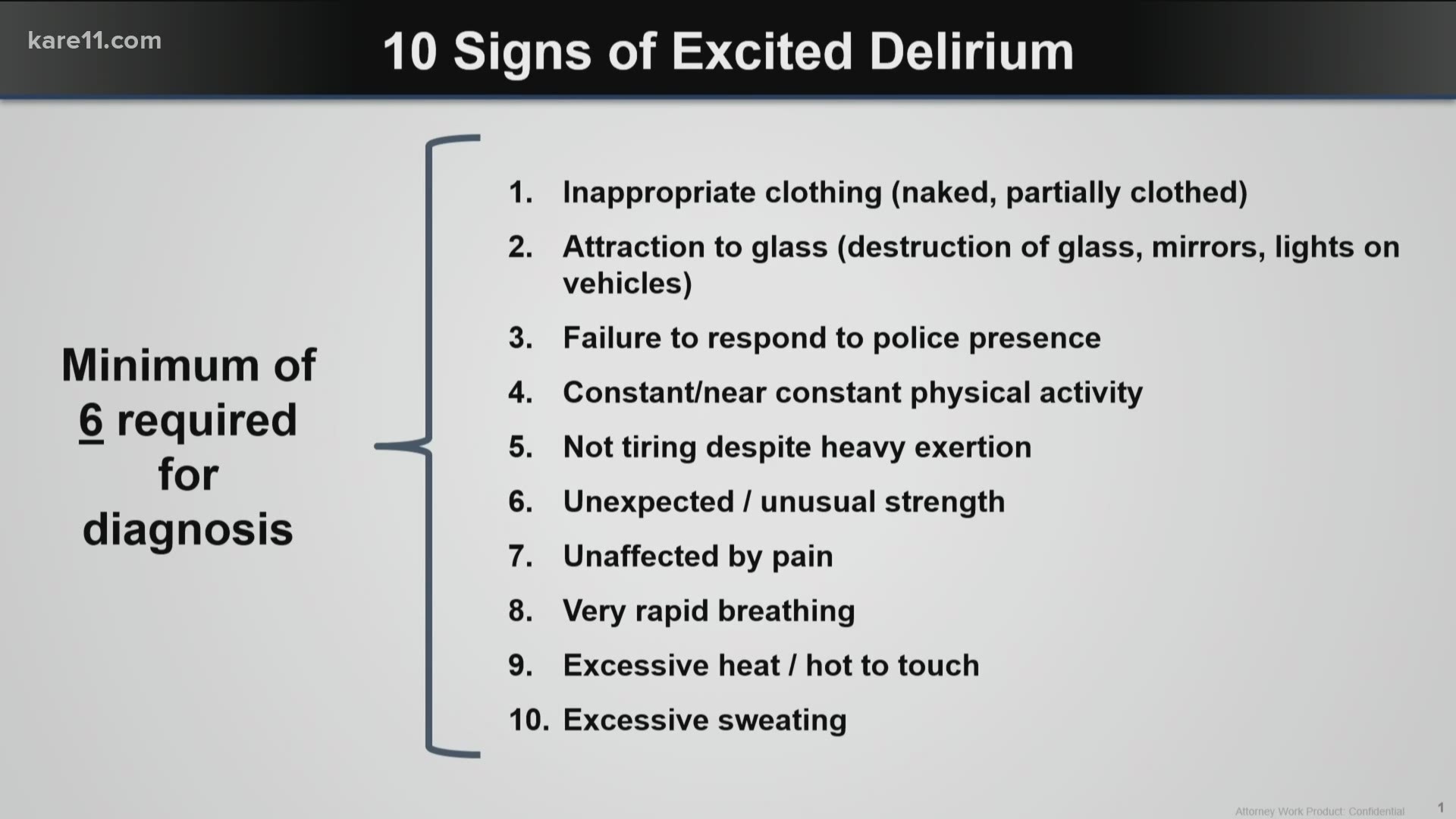 MINNEAPOLIS — The term "excited delirium" has been discussed and referenced by multiple witnesses testifying in the murder trial of former Minneapolis police officer Derek Chauvin.

According to transcript of body camera video from the more than 9 minutes that Chauvin knelt on George Floyd's neck, an officer at the scene said, "I'm concerned about excited delirium or whatever."

But what does the term mean, and why is there so much controversy around it?

Excited delirium is characterized by "agitation, aggression, acute distress and sudden death, often in the pre-hospital care setting," a 2011 study conducted by doctors at the University of California and University of Southern California found. "It's typically associated with the use of drugs that alter dopamine processing, hyperthermia, and, most notably, sometimes with the death of the affected person in the custody of law enforcement."

There isn't a general consensus in the medical community defining the term, the New York Times reported, citing a 2018 review of scientific literature.

It's controversial in part because its diagnosis isn't recognized by the World Health Organization, the American Medical Association or the American Psychiatric Association, Bloomberg Law noted.

"Law enforcement officers nationwide are routinely taught that 'excited delirium' is a condition characterized by the abrupt onset of aggression and distress, typically in the setting of illicit substance use, often culminating in sudden death. However, this 'diagnosis' is not recognized by the vast majority of medical professionals," the Brookings Institute think tank wrote in a 2020 report.

Despite this, the term has been referenced in a number of cases involving Black men in police custody, including the recent death of 23-year-old Elijah McClain in Aurora, Colorado.

The term was first used in 1985 by forensic pathologist Charles Wetli to "explain a series of sudden deaths in cocaine users, occurring primarily in police custody," the Brooking Institute stated. He also used the same term to "explain the deaths of 32 Black women occurring in Miami over the 1980s."

Civil rights activists have long argued that excited delirium is used as a "get-out-of-jail-free card for police brutality," according to Bloomberg Law. The Brookings Institute said it has become "a justification for police aggression that is unwarranted."

In the trial of Derek Chauvin, an emergency medical physician acknowledged in court the lack of consensus over the term.

Dr. William Smock, a forensic medicine specialist called by the state as an expert witness, acknowledged Thursday that excited delirium is considered a controversial diagnosis "because there are some varying opinions as to what causes it" and generally how to define it.

"There isn't 100% agreement on what excited delirium is," Smock said.

He acknowledged that reputable medical associations don't recognize it, but said he believes excited delirium is real.

Smock characterized excited delirium as a "physical and psychiatric state where, because of an imbalance in the brain, a patient will exhibit multiple symptoms. Basically they are hot, their body is revved up. Heart rate is up. Respiration is up. Super-human strength. They are out of control. Their speech is garbled. It doesn't make sense. They can't answer questions."

He shared with the jury 10 signs of excited delirium, citing an American College of Emergency Physicians white paper on the topic.

Smock said an individual must have a minimum of at least six for diagnosis.

Smock told the jury that not a single one of the signs applied to George Floyd before his death.

He determined the cause of Floyd's death to be "positional asphyxia," which he described as "a fancy way of saying he died because he had no oxygen left in his body."

A doctor who tried to resuscitate Floyd on May 25, 2020, referenced the term in his testimony earlier this week.

Dr. Bradford Wankhede Langenfeld said Floyd was in cardiac arrest when he arrived at the Hennepin County Medical Center. He also testified that Floyd was in PEA, or pulseless electrical activity, which he said can suggest hypoxia or low oxygen.

Dr. Langenfeld walked the jury through his thought process to better understand Floyd's condition. He said he considered acidosis, in particular "excited delirium," but said there was no report that Floyd was extremely sweaty or agitated, which are considered symptoms.

Dr. Langenfeld called the diagnosis of excited delirium "controversial," and said he did not believe that was what Floyd was experiencing when he arrived at the hospital.

Officer Nicole Mackenzie, who provides first aid education for the Minneapolis Police Department, also testified about excited delirium, but she was dismissed early due to a legal issue regarding the matter. She's expected to be called back during a different part of the trial.