The 5,000-seat stadium would be home to Spokane Public Schools football and soccer games and bring a new professional soccer team to the city. 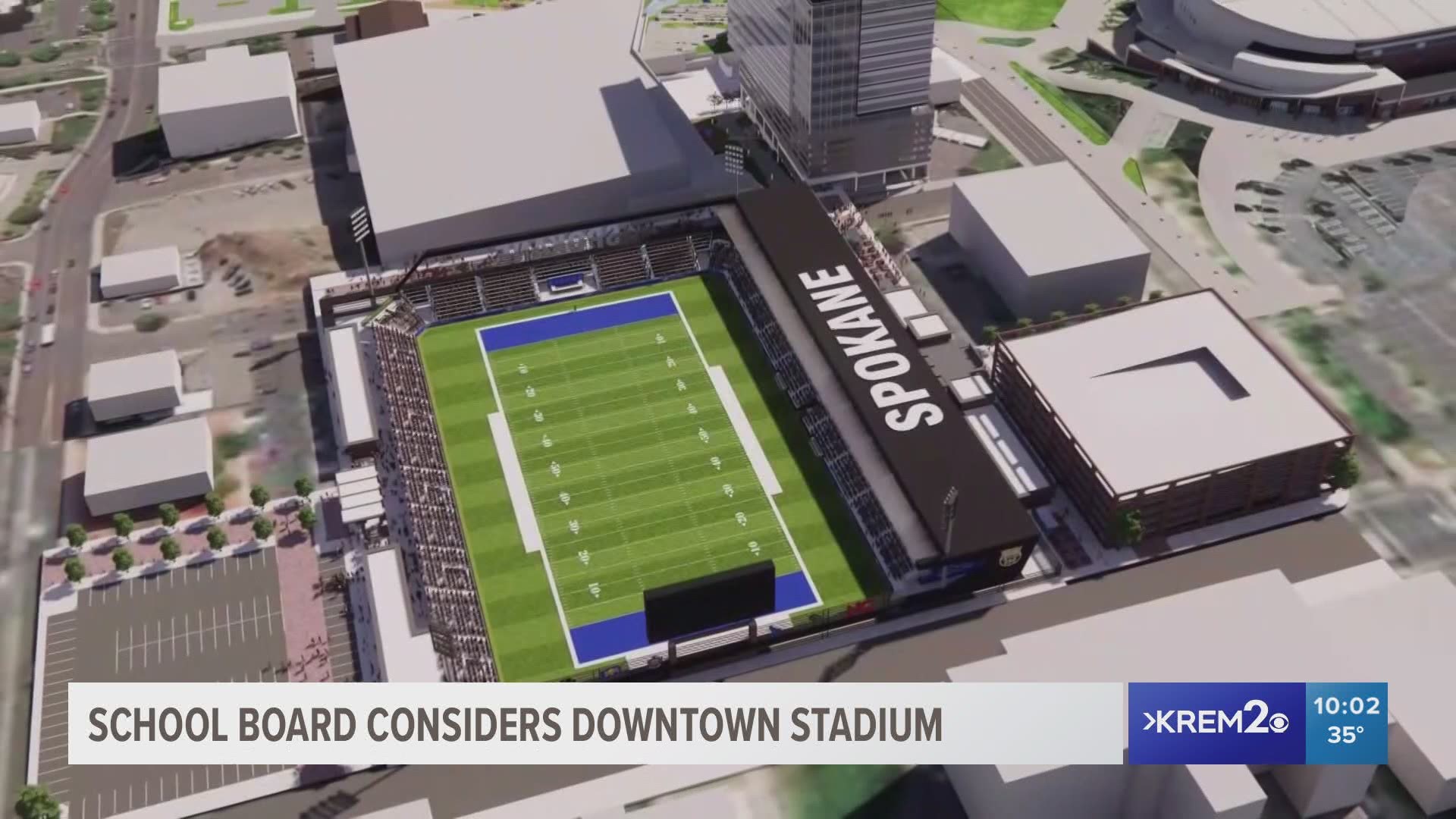 SPOKANE, Wash. — The Spokane Public Schools Board heard from and questioned representatives of a proposed downtown stadium Wednesday night.

The board did not take action at the meeting, opting to seek more public input before even providing comment.

Downtown Spokane Partnership (DSP) and the United Soccer League (USL) are proposing a 5,000-seat stadium that would be home to Spokane Public Schools football and soccer games and bring a new professional soccer team to the city.

According to a press release, the Spokane Public Facilities District agreed to the key portions of the proposal on Wednesday. This means the SPFD has joined the Spokane Sports Commission, Visit Spokane and more in endorsing the proposal.

The SPS board currently plans to replace Joe Albi Stadium at its current site in Northwest Spokane after voters overwhelmingly elected in 2018 to keep it there rather than move it downtown near the Spokane Arena.

“This proposal addresses the concerns that were raised back in 2018, offers savings solutions on maintenance, and provides a more accessible and equitable location for all District 81 students," Downtown Spokane Partnership President Mark Richard said in the release.

In a press release, DSP said the school district would save $17.5 million in operations and maintenance expenses by entering into a partnership agreement for a downtown stadium rather than replacing Joe Albi Stadium. The Public Facilities District would operate the venue if the proposal were approved, according to the press release.

Some SPS board members have previously expressed concerns about losing voter trust if they were to ignore the advisory vote results for Joe Albi.

Further complicating the proposal, the existing plan is already wrapping up its design stage; construction contracts are expected to be handed out within the next month. That means any dramatic decisions from the board would have to come soon, as the proposal calls for scrapping the Albi plan and diverting the remaining bond funds to the downtown concept.

SPS previously released a statement on the downtown stadium plan. The statement reads in full:

"Spokane Public Schools has been moving forward to implement the plan to build a new stadium at Joe Albi. It has been consistently stated that planning would move forward, and that any group in the community is welcome to share ideas about the concept of a downtown stadium if new details or information becomes available.

The SPS School Board has received a request from the Downtown Partnership (DSP) and the United Soccer League (USL) to present a new downtown stadium proposal. According to media reports and information shared today by the DSP, the benefits to the school district include:

The district communication’s department will share updates regarding the DSP request as that information becomes available."

"This could be one of the top soccer markets in the US with this proposed new stadium," USL COO Justin Papadakis said. "The contribution will be up to $2 million."

“This kind of economic opportunity means even more now than it did a few years ago as Spokane works to recover from the economic recession brought on by the COVID-19 pandemic,” Richard said. “Our community and our local businesses would benefit greatly from this opportunity."

The downtown stadium would also be available to host concerts, large-scale special events and other sporting events, according to the press release.

The proposal also guarantees that SPS could use the stadium for all high school football and soccer games as well as any other school district events at no cost, with free parking for all school events, the press release said.

If the proposal is approved, the stadium could be ready as early as fall 2022.