After services in Alabama, the late congressman will be honored in D.C. for two days, before returning south to ile in state at the Georgia State Capitol. 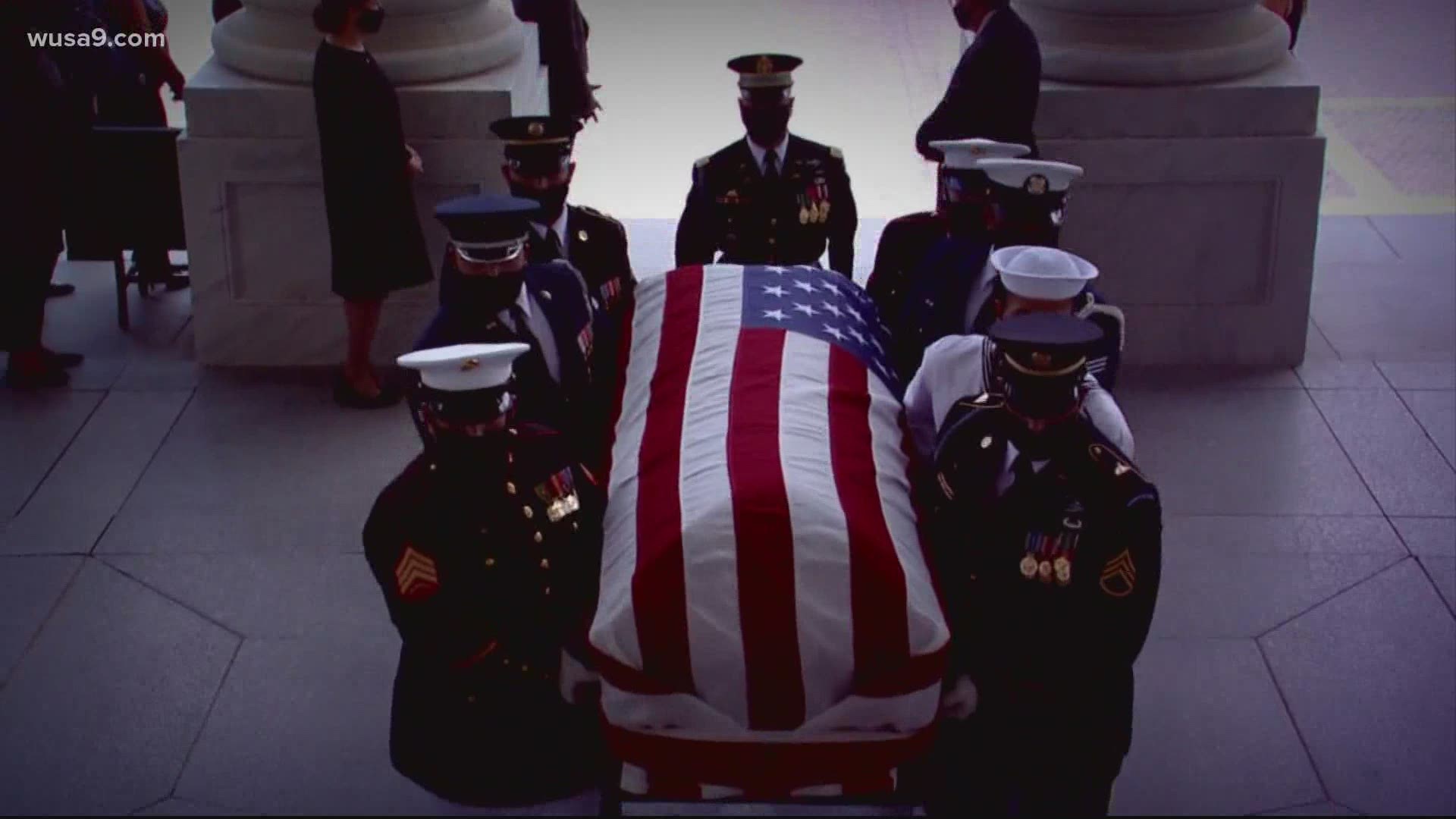 WASHINGTON — John Lewis became the first Black lawmaker to lie in state in the U.S. Capitol Rotunda Monday, on the third of six days of ceremonies honoring the civil rights icon.

Lewis, also known as the "conscience of Congress," died July 17 at the age of 80 after a long battle with pancreatic cancer.

After services in Troy, Alabama and a processional to the Edmund Pettus Bridge in Selma over the weekend, the late congressman landed at Joint Base Andrews Monday morning, where his casket was saluted by the military honor guard.

A motorcade to the U.S. Capitol made several stops in D.C. along the way, including a pause outside the Lincoln Memorial and a visit to Black Lives Matter Plaza. Lewis made one of his last public appearances at the Plaza on June 7

“We must use our time and our space on this little planet that we call Earth to make a lasting contribution, to leave it a little better than we found it, and now that need is greater than ever before," Lewis said in an interview with the Washington Post, on his message to protesters.

RELATED: The late Rep. John Lewis will lie in state at the US Capitol 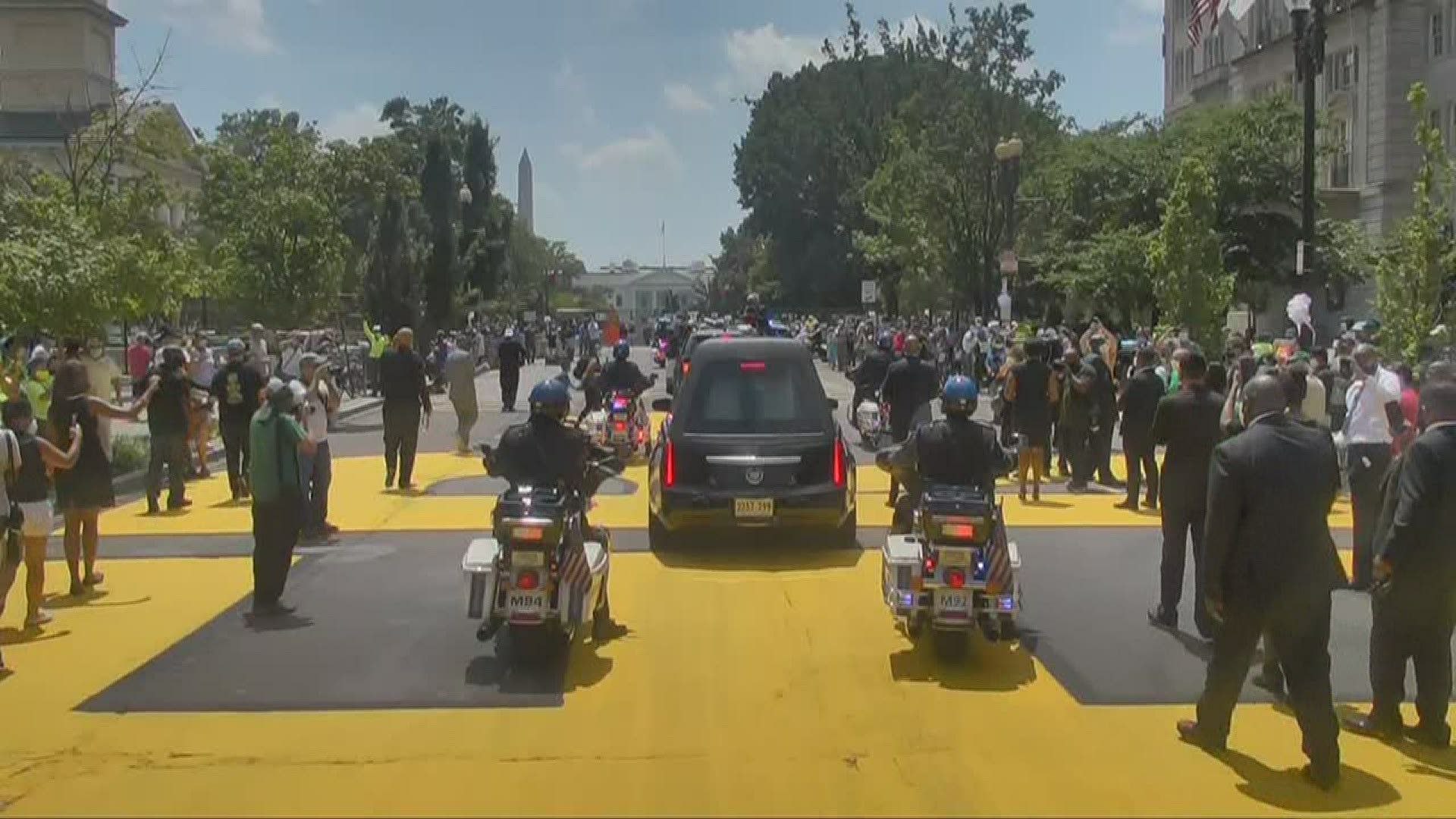 Lewis' casket was escorted up the East Front Steps of the Capitol by a military honor guard before being placed in the center of the Capitol Rotunda for an invite-only ceremony attended by lawmakers and family.

"In Congress, John was revered and beloved on both sides of the aisle, on both sides of the Capitol," Pelosi said. "He understood the power of young people to change the future ... When John made his speech 57 years ago, he was the youngest speaker at the March on Washington program."

President Donald Trump was not in attendance and told reporters that he would not be visiting the Capitol while Lewis lies in state. Former Vice President Joe Biden is expected to visit with his wife, Dr. Jill Biden, Monday evening.

WATCH: Rev. Wintley Phipps performs "It is Well" and "Amazing Grace" during an invite-only ceremony at the Capitol honoring Lewis. 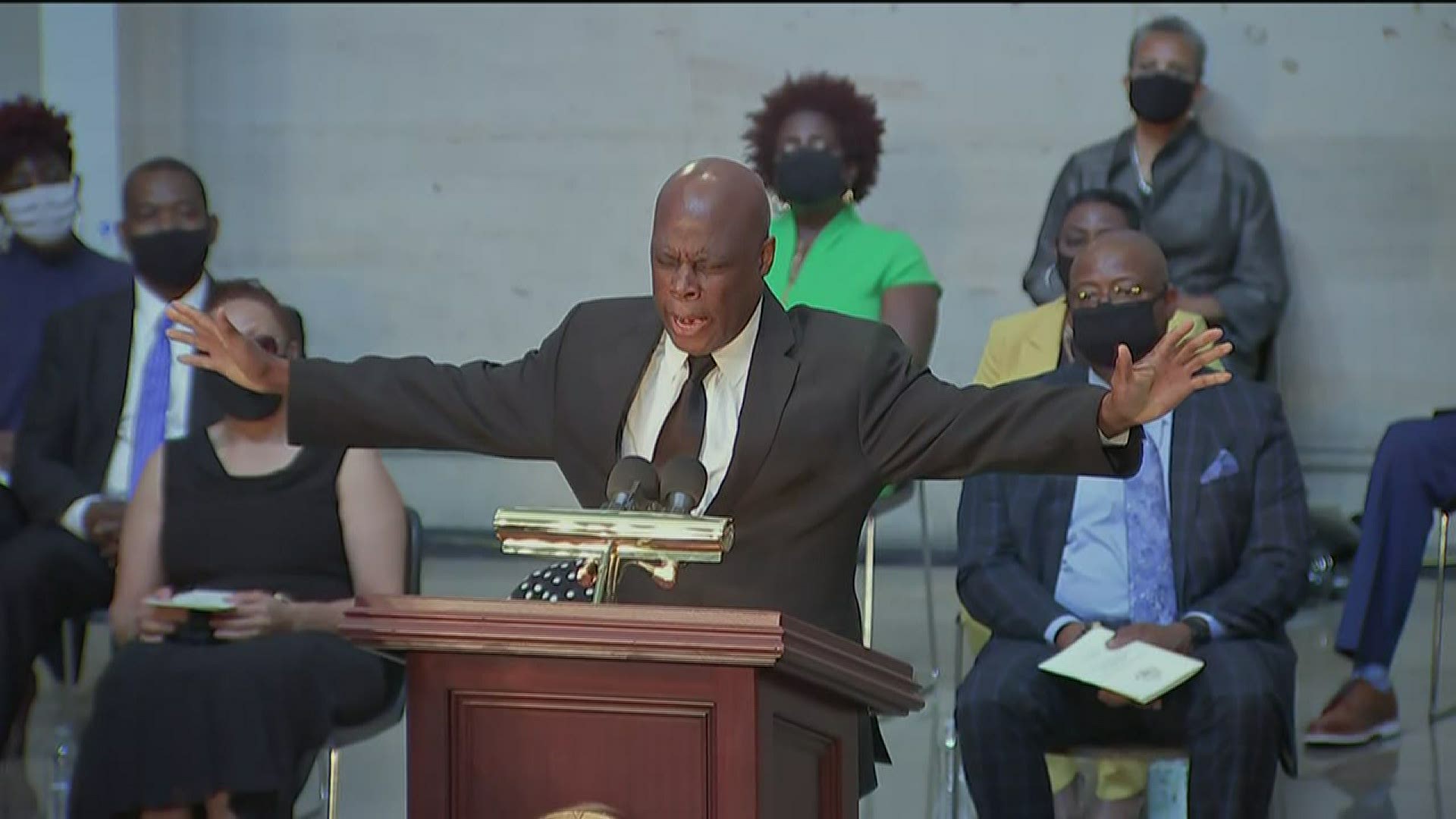 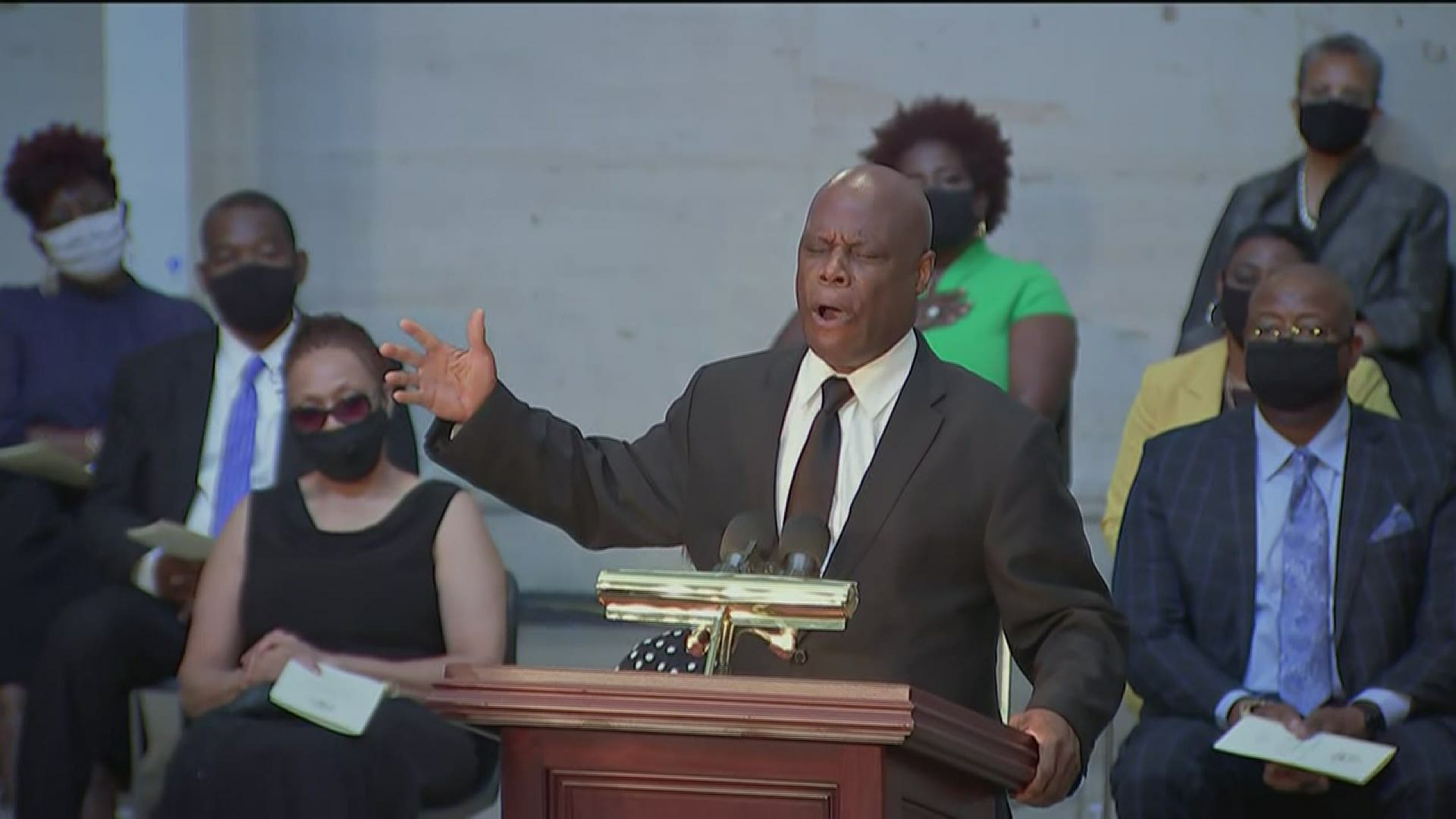 Several members of the Congressional Black Caucus wore masks that said "Good Trouble" alluding to Lewis' now-famous 2014 speech at Emory Riddle where he advised students to "find a way to get in trouble, good trouble, necessary trouble." 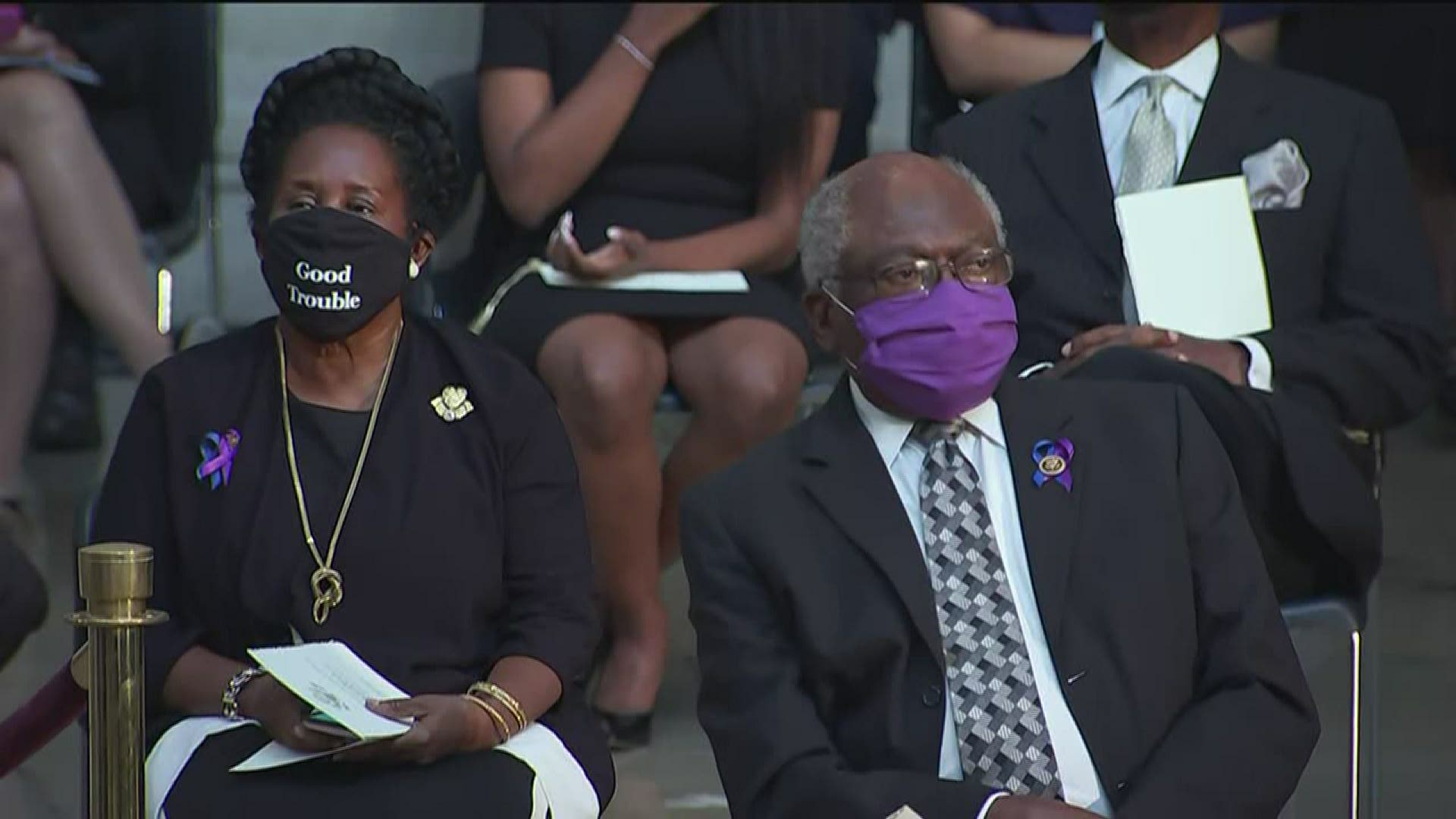 The general public will be able to pay their respects Monday and Tuesday on the East Front Steps of the U.S. Capitol.

Lewis' family and D.C. officials discouraged traveling to D.C. for the ceremonies due to the ongoing pandemic, and those who attend the public viewing are required to wear masks and practice social distancing.

After two days of observances in D.C., Lewis's procession will travel to Georgia Wednesday morning. He will lie in state at the Georgia State Capitol starting Wednesday, before he is buried on Thursday. 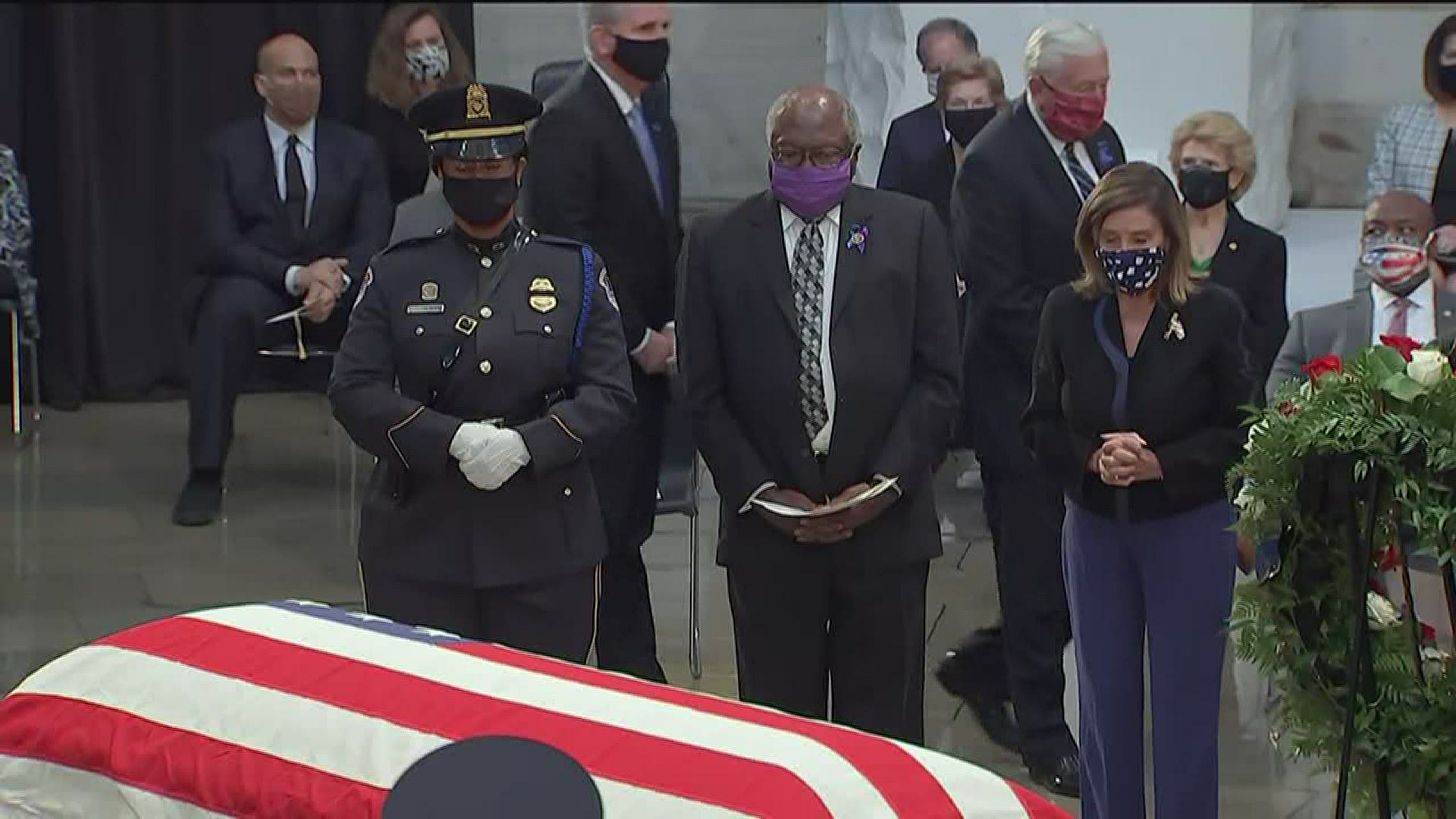 RELATED: 'I loved him like a brother' | Freedom Rider remembers times with John Lewis

Sign up for the Get Up DC newsletter: Your forecast. Your commute. Your news