It's been seven months since floodwaters washed out the RM 2900 bridge in Kingsland. 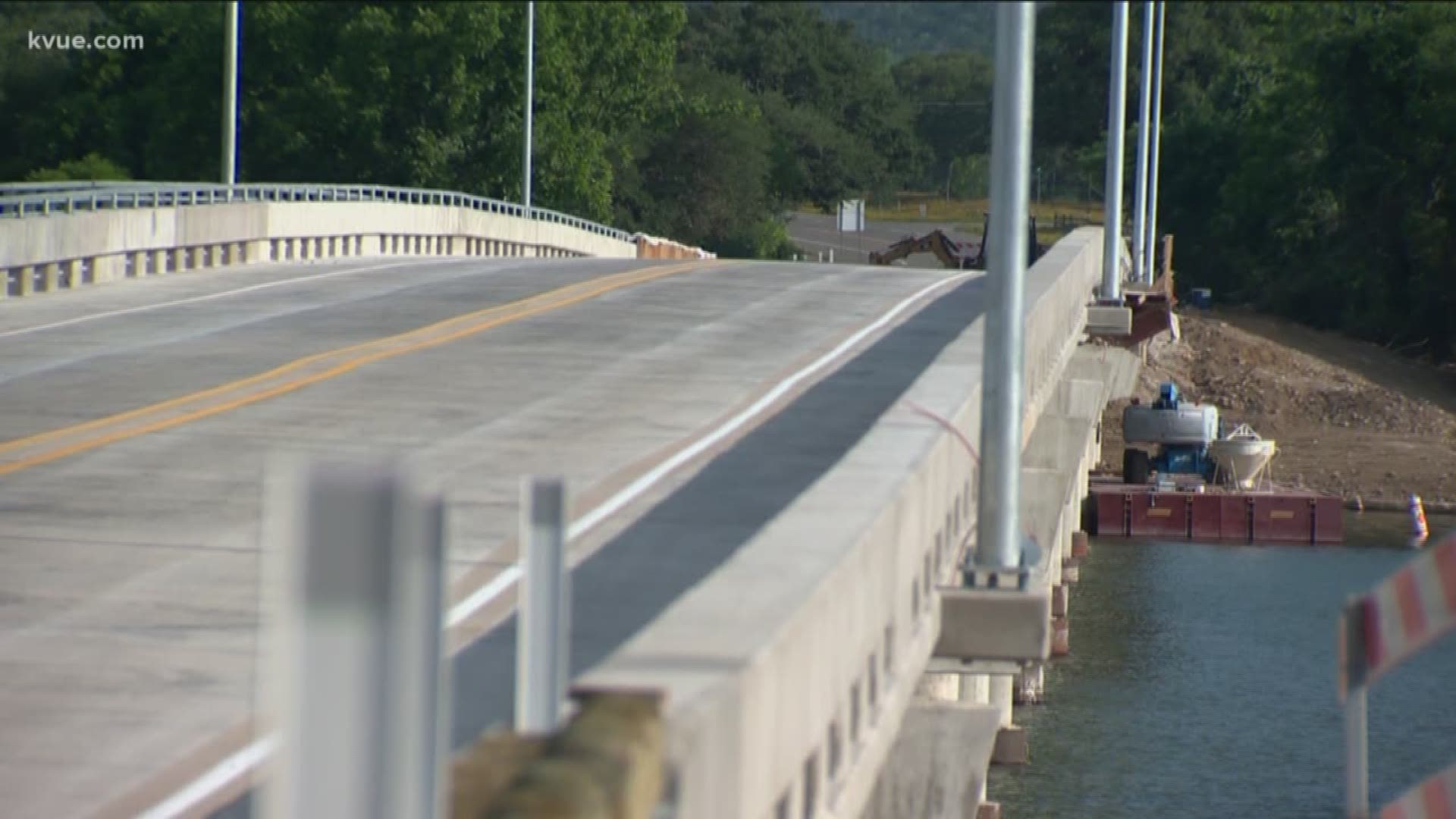 KINGSLAND, Texas — The bridge is back.

Historic floodwaters washed away the RM 2900 bridge on Oct. 16. Since then, the community has been separated.

"So what was a two-minute drive to going to the grocery store, to go to the pharmacy, to get gas, to do anything like that, now became a 40- to 50-minute drive," said Llano County Judge Ron Cunningham.

RELATED: Final beams to be placed on Kingsland 2900 bridge washed out in historic flooding

KVUE spoke to a manager at Grand Central Café. It’s just about five minutes from the bridge.

Kim Anderson said since the bridge has been closed, they’ve lost about 40% of their business and it shows with the empty seats during the morning rush.

For those who continue to make the drive, Anderson said what used to be a five or 10-minute commute became 45 minutes just one way.

Anderson couldn't wait to see the bridge open up.

“We miss our patrons. We miss our customers and they’re just right across the bridge and they have to come all the way around if they want to come out," said Anderson. "To visit us they have to go all the way through marble falls and back this way.”

"What was a 15-minute response, was now maybe a 20- to 25-minute response. It did increase," said Cunningham. "But because the communities worked together so fast, there really was no downtime on getting responses to people."

Cunningham said emergency response crews weren't the only ones to come together to help out. He said the entire community stepped up.

"We had people, instead of being upset about the bridge, they were asking, 'What can I do to help,'" said Cunningham.

RELATED: Hundreds of LCRA employees come together for day of service

There was a ribbon-cutting ceremony Friday, May 24, at 2 p.m. Senators John Cornyn and Ted Cruz attended.

“We made a promise to this community that we would make rebuilding this bridge a priority,” said TxDOT Austin District Engineer Terry McCoy. “Working with our contractor, Capital Excavation Company, we were able to keep that promise and rebuild the bridge in less than seven months.”

“The goal was simple,” said Texas Transportation Commission Chairman J. Bruce Bugg Jr. “Give the people of Kingsland a better bridge, and we accomplished that in record time.”

Chris Smith lives on the other side of the river. He said the last seven months have been filled with a lot of long drives.

"This bridge was really critical to our community over here. When we bought here it was such a great place. We had five minutes to a grocery store," said Smith. "When this bridge went down, it turned it into a 40-minute drive just to get a loaf of bread, so we are thrilled to get it back.”

Smith said even though the bridge washed out, he never felt forgotten.

"We came together more so than we did prior because we knew that our neighbors were on the other side and many, many houses were affected because it pretty much wiped out our community, not just the bridge," said Tammy Manning. "Rain is not a pleasant thing for us. It still causes a little bit of PTSD, so we’re still recovering.”

Manning is the executive director of the Highland Lakes Crisis Network. She said while it's great to see the bridge rebuilt, the community still needs a lot of help.

She said people can go to the Highland Lakes Crisis Network website to sign up to volunteer.

'It felt like an explosion': Plane crashes into McKinney home; two injured