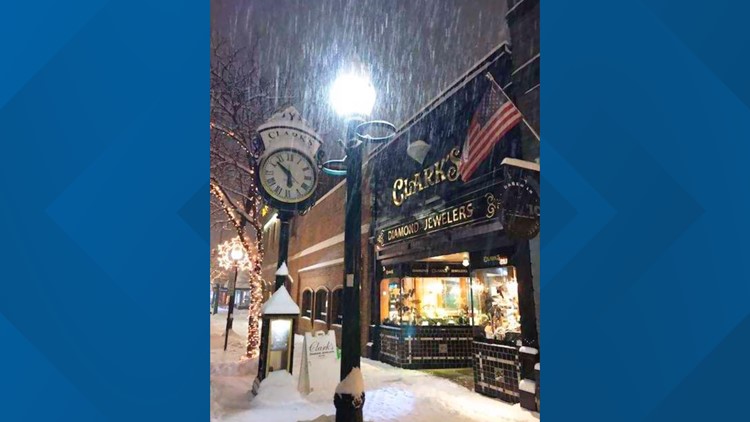 Sales tax is excluded from the refund, and all purchases must be paid in full during the promotional period.

"I paid up this year to get the best odds that I could for my customers, because I was really confident that we were going to get this big storm," said owner Jane Clark.

Snow accumulations were recorded from 3867 N. Player Dr. in Coeur d'Alene, and will be determined by Doppler Radar and Weather Command reports.

Weather Command is a third-party verifier out of Illinois that works with the jeweler's insurance company.

The business posted on Saturday that climatologist Cliff Harris reported 3.3 inches of snow since the start of the promotion.

Clark's wrote to KREM on Monday that Weather Command's initial report is showing less than 3 inches of snow, which they immediately contested.

"We’re going to put up a strong fight! This is not the results we were hoping for, as our local climatologist reports showed over 3” inches at the official measurement location and what we all witnessed early Saturday morning," Clark's wrote in a statement to KREM. "As such, the insurance company will now survey a variety of data sources to glean the most accurate snowfall measurements possible for re-verification."

Clark's added that the Weather Command's official weather report could take two business days, but that they will share the results with everyone as soon as possible.

All payouts will be subject to insurance company verification and approval of promotion, the company wrote on Facebook.

Clark's has sold jewelry on Sherman Avenue in downtown Coeur d'Alene for 111 years.

Three generations of the family have dedicated their professional lives to the business. Gemtologist Jane Clark is now at the helm of the business.

The shop has won several accolades over the years, including Best Jewelry Store from Spokane and Coeur d'Alene Magazine, and Best Jeweler and Best Place to Buy an Engagement Ring from the North Idaho Business Journal.

RELATED: The Wonder Building market is now open in downtown Spokane. Here are the vendors