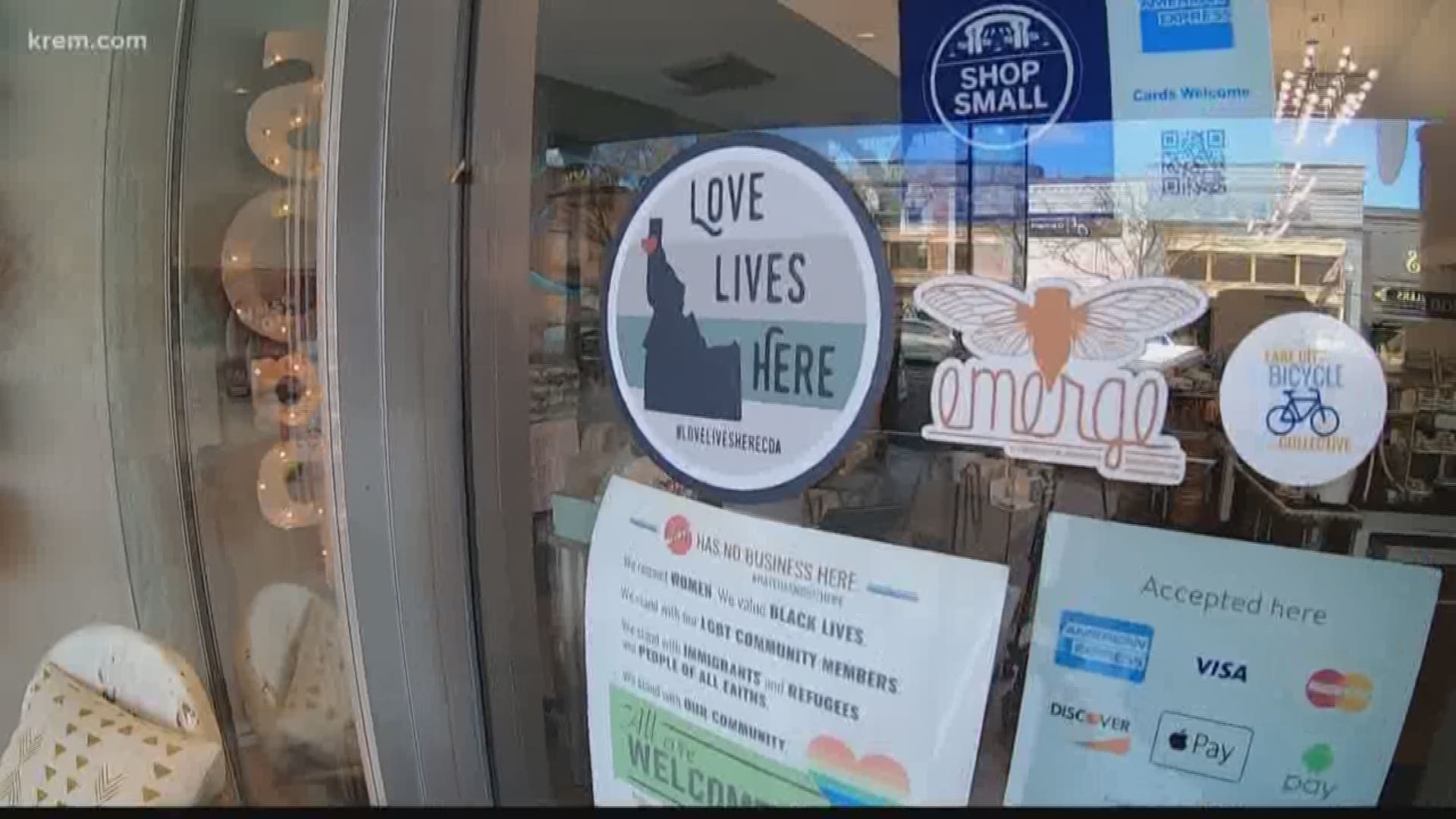 COEUR D'ALENE, Idaho — In response to racist fliers distributed in Coeur d'Alene stores, a new campaign aimed at condemning hate and promoting love appears to be catching on with some businesses in the Lake City.

“We don’t like to talk about anti-hate. We like to refer to it as a kindness campaign,” said Tenneson, a Coeur d'Alene attorney. “Our mission is to spread love and to spread kindness throughout the community, and to unite our community in a positive way over a negative issue.”

According to Tenneson, Love Lives Here was formed in response to various incidents where racist fliers promoting white supremacy were found in local businesses. In many cases, the fliers were hidden within merchandise with the apparent intention of being found by shoppers, Tenneson said.

A racist flier left in a downtown soap store proved to be somewhat of a tipping point for the group.

Andy Morsell, who co-owns Mountain Madness Soap Company on Sherman, said one of his employees found the flier hidden underneath a soap dish while cleaning earlier this month.

“The content very much goes against our beliefs. It’s quite offensive and hateful," Morsell said. "We don’t want to see that stuff here.”

Morsell added that it wasn't the first time he and his staff have found hateful literature left in their store.

Tenneson and her partners eventually got word of what happened at Mountain Madness, and opted to expedite the launch of Love Live Here.

Now, Mountain Madness and at least two dozen other Coeur d'Alene businesses have pledged support to the group and are displaying Love Lives Here stickers outside their stores.

“I feel like we have some strengths in numbers now," Morsell said.

“While these incidents bring negativity to our community, we want to turn that into a positive voice where our message of love outweighs any message of hate,” Tenneson said.

When an organization partners with the Love Lives Here CDA, the business receives a pledge to defend the safety and security of everyone who lives in and visits Coeur d'Alene. LLH also provides a "rapid response guide" on what actions to take following a racist incident.

In addition to HREI, the North Idaho Pride Alliance is also partnered with the group, Tenneson said.

RJ Rueber, who owns Calypso's Coffee and Roasting, was an early participant in the Love Lives Here campaign.

“It’s really cool to see other businesses get in on it. It’s awesome to see that our community is uniting together, finally saying: ‘None of this in our community anymore,'" Rueber said.

For more information on the group, head to their website.