Bundy is the Idaho man who helped lead the 2016 occupation of the Matheur National Wildlife Refuge in eastern Oregon. 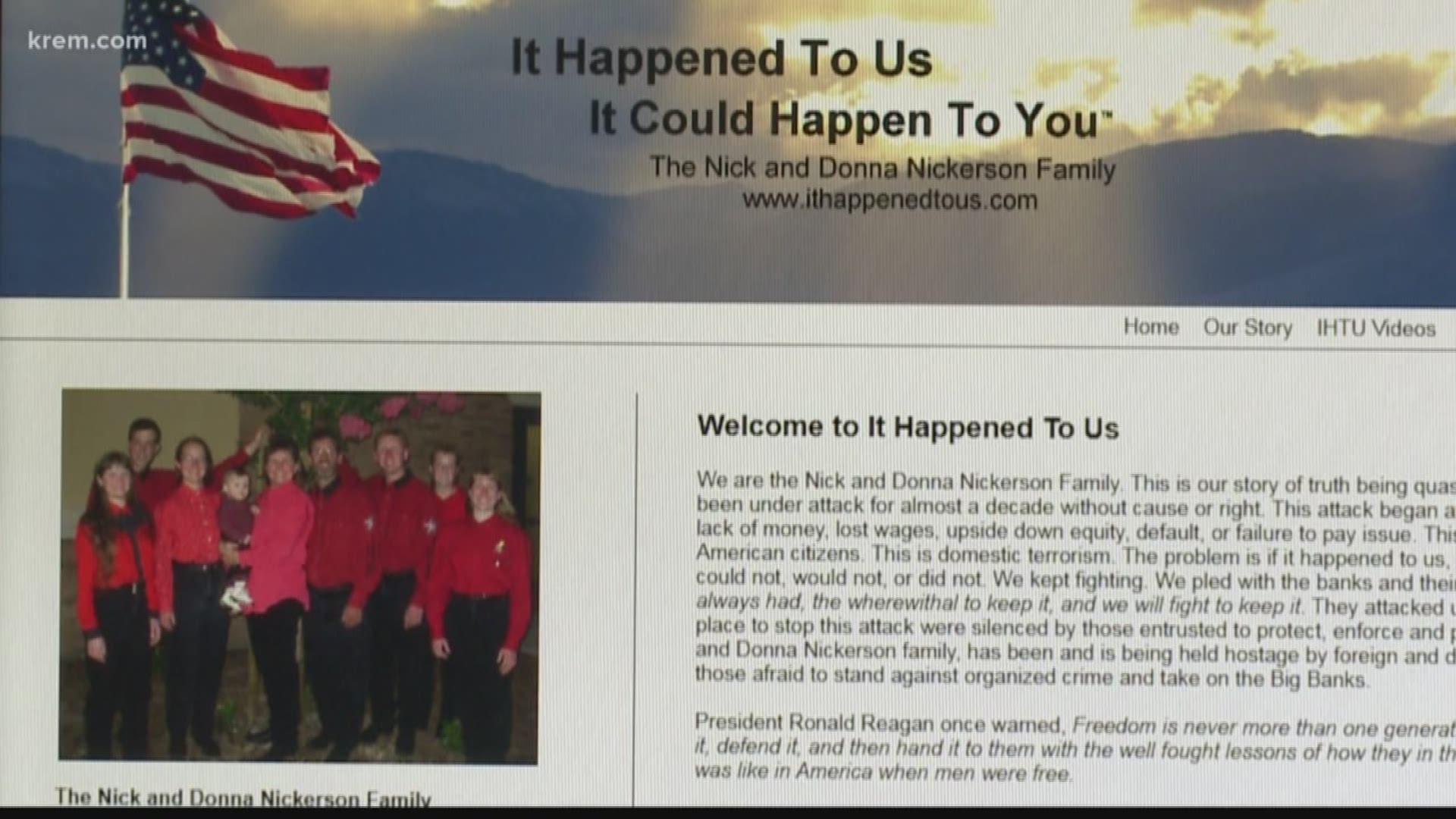 Editor's note: Above video was a report published during Bundy's arrival in Orofino as he urged supporters to help the family

CLEARWATER COUNTY, Idaho  – Ammon Bundy, the man who helped lead a 2016 standoff with the federal government in Oregon, says he is leaving Orofino, Idaho on Thursday after a family failed to present evidence of wrongful eviction from their ranch.

Bundy said he was allowed onto the property on Wednesday after he posted a Facebook Live video one day earlier encouraging his supporters to help the family after authorities evicted them from their home.

On Thursday, he said documents given to him by both the family and Clearwater County Sheriff Chris Goetz did not support claims that the family was in "immediate danger" due to criminal behavior from the sheriff's office.

“We feel that we have done our due diligence to the family and to the matter altogether. If we are wrong, as moral men, we pray that the family and that God will forgive us," Bundy said on Thursday.

Bundy and his family have been involved in multiple standoffs with the federal government, including one on patriarch Cliven Bundy's ranch in Nevada in 2014, and the 2016 Oregon standoff where Ammon and his brother, Ryan, led a group of supporters who demanded that two Oregon ranchers be freed from prison. President Trump pardoned those ranchers in 2018.

RELATED: Ammon Bundy: 'We had no ill intent in what we were doing'

Family evicted from home on Tuesday

On Tuesday, Clearwater County Sheriff’s deputies arrived at the Orofino home on Neff Road to remove the residents, identified as Donna and Charles Nickerson, and their goods from the property. Deputies said Donna Nickerson repeatedly made statements about authorities needing to shoot her to remove her from the property.

The Nickersons were removed from the property as of 2:30 p.m. on Tuesday, deputies said.

Another woman, identified as 58-year-old Jeannie Smith from Wolf Creek, Montana, was arrested for trespassing and has since bonded out of jail. Goetz told KREM on Wednesday that authorities had to break a window to remove the woman, who was barricaded inside of the home.

The property has since been turned over to bank representatives.

Goetz said that the conflict between the Nickerson family and law enforcement has gone on for about a decade. About two years ago, there was a sheriff’s sale completed at the property.

"They knew several months back that this was coming," Goetz said.

The family then had a one-year redemption period where they could have bought the property for the sales price plus interest, but they did not, Goetz said. They also could have vacated the property and remove their belongings.

According to Goetz, the Nickersons said the bank even offered to pay for their move.

KLEW-TV in Lewiston reported that Donna Nickerson is accusing Goetz of lying to them, claiming he told them the eviction had been stopped. She added that she wants to sue the state of Idaho.

Nickerson believed authorities were using an expired Writ of Ejectment to carry out the actions, but Goetz showed KLEW a renewed writ dated Oct. 2, 2019.

The Nickerson family said they believe banks are trying to steal their property.

“We pled with the banks and their accomplices to stop their abuse. We refused to surrender to unlawful seizure and extortion. We told them this is our home; we want to keep it; we have, and have always had, the wherewithal to keep it, and we will fight to keep it. They attacked us on every front. We called for help, but no one came. No one stepped forward to enforce the laws that could shield our family and end the abuse,” a post on the family’s website reads.

Bundy says family does not have evidence of wrongful eviction

Bundy said on Thursday that he and The Real 3% of Idaho, an activist group, heard from "multiple urgent sources," including Donna Nickerson, that the family was in immediate danger due to possible criminal behavior from the sheriff's office.

Hundreds of people were asking Bundy and Eric Parker, president of The Real 3% of Idaho, if they needed to respond to the situation, Bundy said on Thursday. This prompted them to find accommodations for a trip to Orofino.

Donna Nickerson was "very controlling" and made sure family members stayed on track with their story, Bundy said.

“This was concerning to us, but many details in her story pointed to incompetency and abuse by the banks, courts and the sheriff’s office," Bundy added.

Bundy then went on to outline and debunk a handful of claims from the family. He said the family told him that the property was purchased in 2002 and the loan was then sold to Chase Bank in 2009. The family claimed that they were unable to make payments after the loan was put into default, Bundy said.

Bundy said he read documents, transaction history and payment history provided by the family and Chase Bank, and determined that the loan started in November 2007 and that the family stopped making payments in February 2010.

“The family provided us with no evidence whatsoever that the bank rejected their payments," he said.

The family also claimed that the deed of trust was not signed by Charles or Donna Nickerson, a claim Bundy rejected when Goetz provided him with a copy signed by both individuals.

Bundy added that the Nickersons did not bring evidence to a court of a contractual violation by Chase Bank.

The family also claimed that they were not given a redemption period, which Goetz told Bundy was incorrect, as he had given the family one year after court proceedings in 2014.

Bundy also said several other claims from the family, including that their property does not fall under Clearwater County's jurisdiction, were also incorrect.

“Sheriff Goetz and his deputies did not commit a crime by violating the Nickerson family’s right," he said. “It is our determination that the Nickersons did not uphold their end of the contract.”

The Real 3% of Idaho releases statement on case

Eric Parker, president of The Real 3% of Idaho, also released a statement on the case after sending three members of the group on Wednesday to document evidence of due process violations against the family.

Ultimately, the group was "unable to find valid evidence of due process violations in this case," Parker wrote.

"On 11-12-19 a Facebook post from Rudy Davis was brought to our attention, this post said that a family was surrounded on their ranch in Idaho. We scrambled for information, finding very little until the eviction was complete. We researched the situation, looking at the family's website and videos and other open source materials. What we found wasn't enough to draw a conclusion regarding due process violations. We decided we needed to send a team to investigate and document if we were going to really know what was going on.

We take very seriously when threat of deadly force is brought on by government for arbitrary reasons like taxes or civil proceedings but, we also take very seriously our responsibility to make sure when we stand up in defense of our neighbor we do so with the ability to see it all the way through. This may include litigation, an indictment, or even a life. So in knowing that, we admit that our bar for burden of proof is very high.

We sent 3 members to document any evidence and testimony in regards to due process violations on 11-13-19. They arrived and began attempting to meet the burden of proof needed for the organization to start a due process violation intervention. They met with the family, visited the property, met with neighbors, and met with the Sheriff. They then spent the evening going through paperwork. I received a brief late 11-13-19 that the State investigation team of Idaho volunteers for The Real 3%ers Idaho were unable to find valid evidence of due process violations in this case.

We would like to thank everyone who cooperated with our investigation including Sheriff Goetz, our volunteer staff, and everyone who waited patiently for their findings ready to respond to due process violations, this is incredibly important in the maintaining of a Republic."

When Bundy first heard about the incident on Tuesday, he urged supporters in a Facebook Live video to help the family in Orofino.

In the video, Bundy mentioned Orofino and the Nickerson family by name, along with the home’s address. He claimed that the family has been in “battle with the banks” since 2009, adding that the situation arose when a bank sold the family’s loan to another bank.

“It has been in court back and forth, on and off, until it’s got to the point where the sheriff said he would vouch for the family and that the family got due to process and that they would not raid his home,” Bundy says in the video.

Bundy said he was at first concerned by the legitimacy about the situation and whether it warranted a response, but now believes the situation is one that has not been given due process after speaking with Donna Nickerson.

“These people truly need our help. I would not make this video if it was otherwise,” Bundy said.

Bundy said he also spoke to three neighbors who said that the Nickersons were an “honest, good family” and that what was happening to them was “a serious injustice.”

Throughout the video, Bundy urges his supporters to help the family in Orofino.

Goetz said he has received several calls about the Nickerson family’s situation from different places. He added that he talked to Bundy on Tuesday before he posted the video online and gave him a rundown of the case. Bundy then told Goetz that he wanted to “explore it further.”

RELATED: A Spokane veteran was evicted for no reason, and it's legal

RELATED: Woman evicted after being arrested for harassing neighbors, calling them 'terrorists'