During a preliminary hearing last week, detectives revealed that Carpenter had called 911 in Coeur d’Alene the morning of the murder on an apparent unrelated matter. 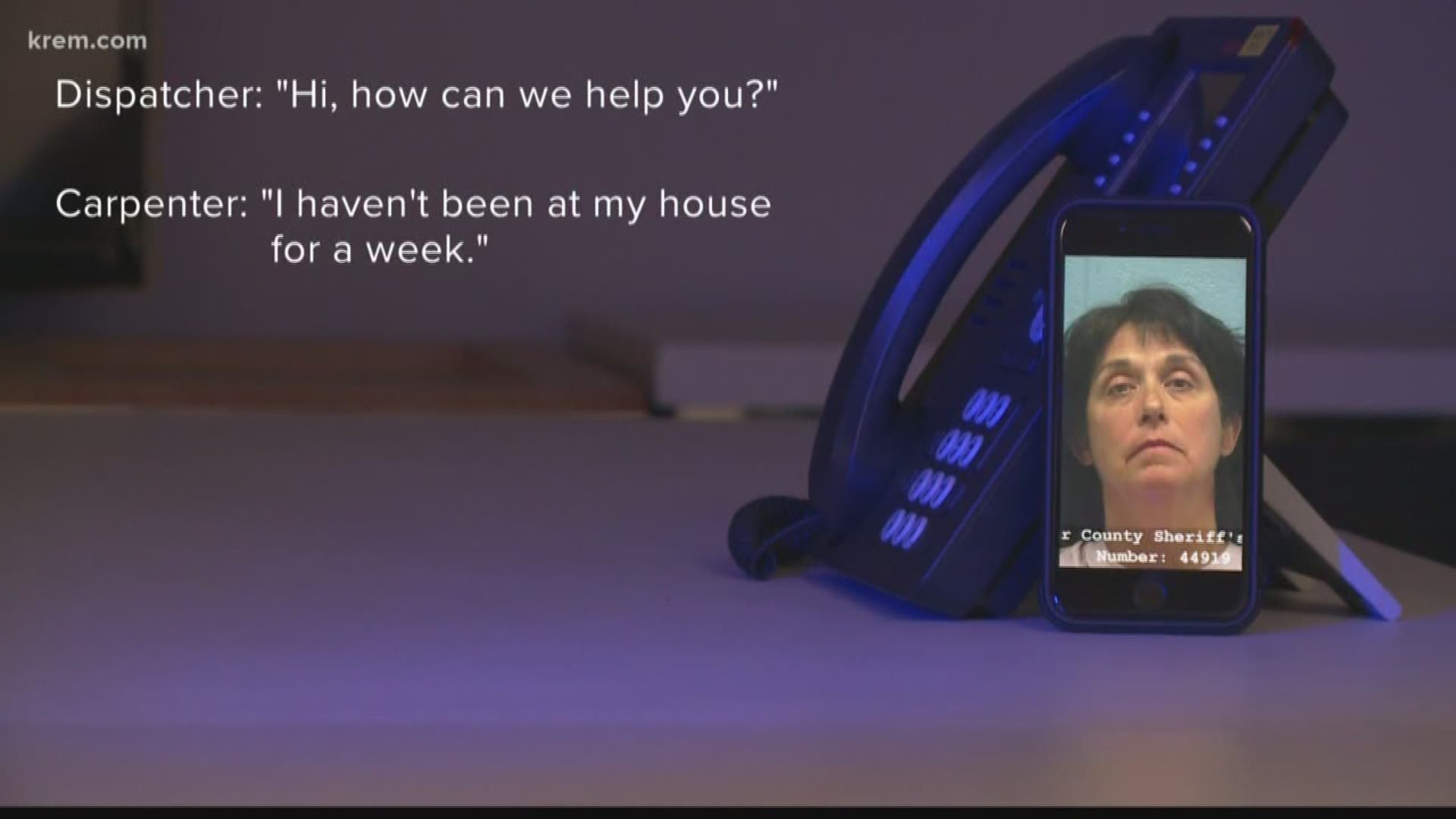 BONNER COUNTY, Idaho — Hours before allegedly murdering a Bonner County woman, a North Idaho suspect had called 911 claiming she had been receiving death threats and that unwanted people were staying in her home.

Carpenter was subsequently arrested in a road rage incident in Montana later that day, but wasn’t arrested in Idaho and charged with killing Ramey until this summer. Evidence submitted to a federal gun database eventually linked a gun owned by Carpenter to bullet casings found at the murder scene.

During a preliminary hearing last week, detectives revealed that Carpenter had called 911 in Coeur d’Alene the morning of the murder on an apparent unrelated matter.

A recording of the call, obtained by KREM through a records request, provides some insight of Carpenter’s behavior that day.

“I haven't been at my house for a week. And we had some problems with some death threats and stuff. And so, it's like somebody is in my house. And I'm afraid,” said Carpenter to a Kootenai County 911 dispatcher at the time. Carpenter’s first call was placed at 8:20 a.m., records show. “I'm wondering if the officer could come here and check it out for me before I go in. I've been followed by about 40 people just to get here that don't like me," she said.

Carpenter’s exact location during the call was redacted in the records request.

In the recording, Carpenter states that a phone belonging to her has been lost. When asked by a dispatcher about who had threatened her, Carpenter said, “I don't know their names personally, but I got all their plates."

"A lot of them have been using my name and doing money, and then pretending they're me. And staying in my house when I'm not even here. Nobody has a key to my house but me. But apparently, people have been coming in the house and using it when I'm not here," Carpenter said during the roughly two minute long call. She additionally stated that her husband had been arrested and had provided other people with a key to her home. A dispatcher then told Carpenter that an officer would come meet her.

It’s not clear if Carpenter’s claims were ever substantiated.

According to another 911 call provided to KREM, Carpenter showed up minutes later to a U.S. Forest Service building off of Kathleen Avenue before then driving to the Coeur d’Alene Police Department across the street.

Records also indicate that Carpenter may have been taking random photos of people that same morning.

According to a 9:09 a.m. 911 call placed by an unnamed man, a woman was driving near a shopping center near the intersection of US95 and Wilber and taking photos of people. The man’s name was redacted in the records request.

“I had a gal driving around in a Gold GMC SUV, Washington Plates. I was originally notified by my wife that she was driving around taking pictures of her. And the gal is literally driving around snapping pictures, telling people that they're going to jail," says the man in the call.

While Carpenter is not named in the call, the description of the woman’s vehicle matches the same car Carpenter was driving that day, records show. The man’s call was included with the same 911 records request provided to KREM.

A Lincoln County, Montana Sheriff’s deputy who would later arrest Carpenter in Libby testified that she was acting “delusional” and had made claims that people were trying to steal her identity.

While detectives haven’t identified a singular motive in Ramey’s slaying, Carpenter is accused of stealing a rifle from the Ramey home after the murder.

Carpenter is set to be arraigned in Bonner County district court later this month.