Activist Erin Brockovich sounds off on Hillyard water contamination: 'There is more to this story'

Brockovich famously took on Pacific Gas and Electric Corp. in an investigation that found widespread water contamination in a small California town. 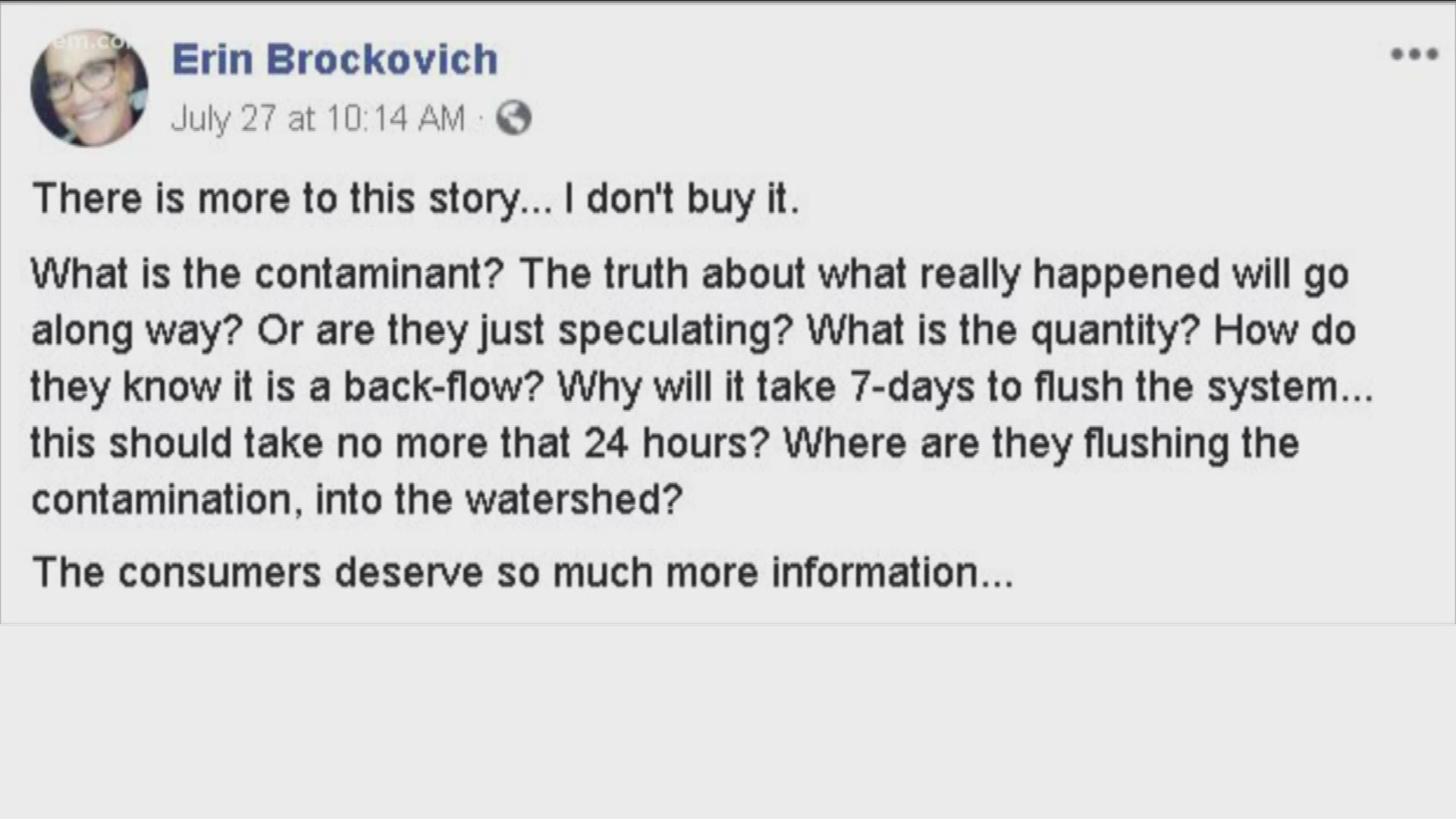 SPOKANE, Wash. — People living in part of the Hillyard area in Spokane were asked on Friday to avoid drinking the tap water.

City leaders say a commercial hydroseed vehicle that used water from city fire hydrants allowed some contamination to back flow into the city’s system when filling up with water. Before the alert was sent out, a few residents reported to the city that there was a green tint and fibers floating in their tap water.

City spokesperson Marlene Feist said hydroseed has grass seed. This means tests are aimed at looking for suspended solids and fertilizers, including nitrates, phosphorus and potassium.

She added that city leaders will then look for overall quality of the water, such as making sure there is sufficient chlorine to disinfect it.

Now, activists are sounding off about the contamination – including Erin Brockovich.

Brockovich was the subject of the film “Erin Brockovich” starring Julia Roberts, who won an Academy Award for her portrayal of the consumer activist.

The investigation found that the company had been contaminating water in the small town of Hinkley, California, for years. As a result of the lawsuit, PG&E was forced to pay $333 million in damages to 600 residents.

PG&E filed for bankruptcy in January as it faces billions of dollars in potential damages from wildfires in California.

Brockovich urged California lawmakers not to let the utility go bankrupt because it could mean less money for wildfire victims.

RELATED: Largest utility in US files for bankruptcy amid wildfire lawsuits

Brockovich shared her thoughts on the Hillyard contamination via her official Facebook page on Saturday.

What is the contaminant? The truth about what really happened will go along way? Or are they just speculating? What is the quantity? How do they know it is a back-flow? Why will it take 7-days to flush the system... this should take no more that 24 hours? Where are they flushing the contamination, into the watershed?

The consumers deserve so much more information...

KREM has reached out to Brokovich for further comment.

Many Spokane residents responded to her post in the comments, including write-in mayoral candidate Nicolette Ocheltree.

“The hardworking people of this City are being robbed and lied to left and right. There’s a war on the 'middle class' and poor; it gets worse every year. No one in office is really willing to ask or answer the hard questions— and for the few that try, they’re shut down and belittled,” Ocheltree wrote in response.

City officials said free drinking water is being provided to people living in the area. Crews went door-to-door to deliver extra large cases along with an informational notice to each property.

Once the city resolves the situation, affected customers should run their water for five minutes before using it for drinking or cooking.

RELATED: Airway Heights chosen one of 8 locations to be tested for PFOS and PFOA