'I don't want to die': Cheney 7-year-old and family nearly crushed by tree during 2021 windstorm

This was not the first time the child has dealt with disaster. 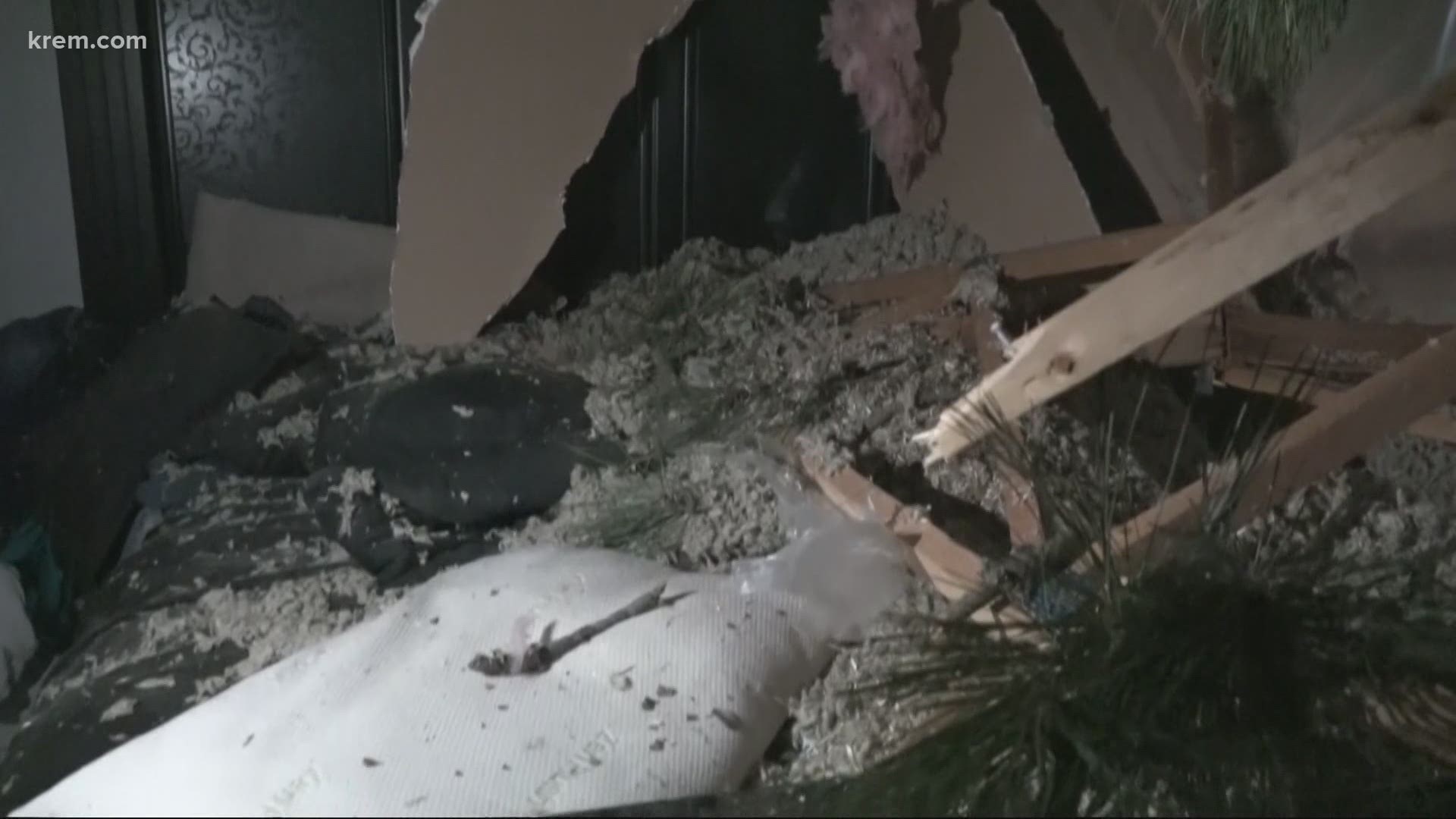 CHENEY, Wash. — Cleanup continues all around the Inland Northwest, but removing branches cannot fix everything. A Cheney family is dealing with disaster after Wednesday's devastating storm.

It's a feeling 7-year-old Caillana Pettit won't ever forget.

"My heart was beating fast because I was so scared that I kept feeling my heart," Caillana said, mimicking the sound of her heart. "I was saying, ‘I want to leave, I don’t want to die.’"

It was more than just fear, it was her first panic attack. The January 13 windstorm devastated her home, crushing a bedroom, bathroom, shed, and fence.

"I yelled at the kids 'get down', and the tree lands right here on top of the trailer," her father Jonathan said. "They were all screaming from inside."

It's a night still vivid in their minds.

Jonathan, his wife, and two of their seven kids were laying in bed together when the wind started blowing their trailer.

It wasn't just their home, he was concerned about his neighbors, too. He debated between going back to sleep or checking on them.

He decided to walk out of the trailer. The next thing he saw was a tree falling right in front of him. Then he turned around and saw a tree crashing through his bedroom.

"I would have been in there for sure so I'm just glad that I decided to check on the neighbors and be a good neighbor," he added. "It saved a bunch of us, me for sure."

The tree landed exactly where he sleeps. He watched helplessly as a tree crushed his bedroom.

"I had a bunch of thoughts in my head, like, please don't let nobody be in there," he said. "I hoped they got up and they weren't there."

Caillana, her six siblings, and her mother were all inside hiding under a table. But something in Caillana told her to move.

"I tried to jump out the window," she said. "Like, I wanted to get out, go in the front yard, and drive away fast."

This isn't the first close call she's experienced. During the 2015 windstorm, a tree damaged their old South Hill home.

RELATED: How 2021 windstorm in Spokane compares to historic 2015 storm

"She's just trying to escape out of the house and I don't know where she's going to go," her father said. "She had a huge panic attack and I've never seen her so scared."

Her parents are worried, having this happen again could cause major anxieties in the future.

"My mom and my dad, when they stay in bed if that tree falls on them... They could have almost died," she said. "It's a good thing you woke up, right Dada?"

They were in the process of buying the trailer, but now do not know if they will be able to. They set up a GoFundme to help raise money to pay for their damages.

The Red Cross has helped the family and gave them money for a hotel room as workers are coming to remove the tree limbs from their home.