"Yeah, it's going to be work on our end but we're willing to do that to keep it as simple as possible for the seniors," the director of the health department said. 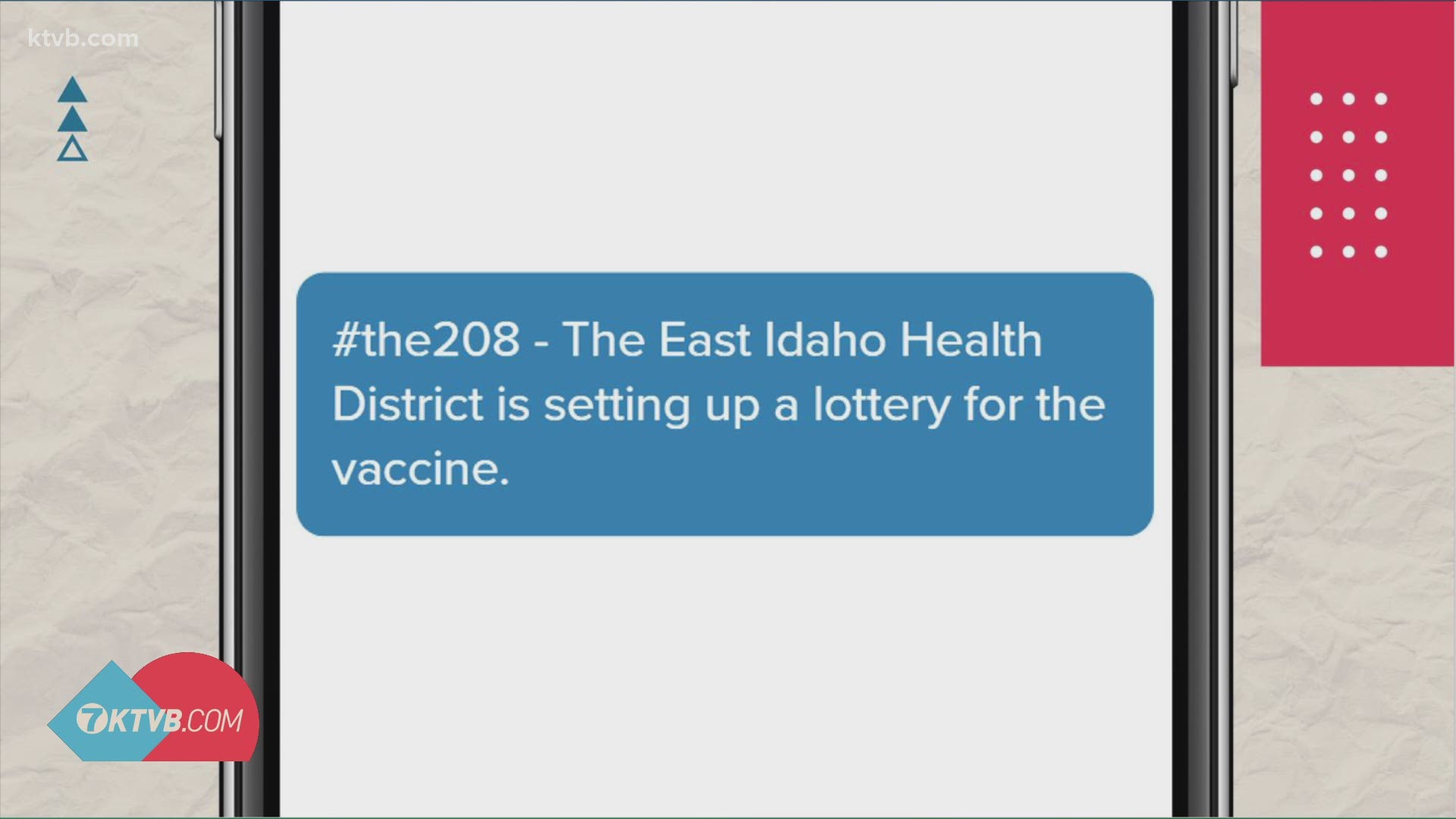 BOISE, Idaho — Idahoans scrambled for the coronavirus vaccine like it was GameStop's stock before everyone's parents found out about it or a Turbo Man action figure on Christmas Eve when the state began allowing seniors to get vaccinated on Monday.

The rollout wasn't a Fyre Festival-level of a disaster, but St. Luke's had over 100,000 people trying to get one of the hospital system's 1,500 vaccine appointments, which were all booked within eight minutes.

The logjam left thousands of Idahoans anxiously waiting to get vaccinated and it wasn't just St. Luke's who experienced a tidal wave of people trying to get an elusive shot. Healthcare providers, public and private, dealt with logjams and only had the advice of checking back later for people who reached out.

A viewer texted The 208, "The East Idaho Health District are setting up a lottery for the vaccine." The district oversees covers Custer, Clark, Fremont, Jefferson, Lemhi, Madison, Teton, and Bonneville counties.

The 208 reached out to Eastern Idaho Public Health about this new lottery system, and director Geri Rackow wanted to be very clear that this isn't a lottery but rather a bingo drawing. Everyone's number will be called eventually.

Rackow explained that this bingo system of distributing the COVID-19 vaccine was put together quickly after the health district had 11,000 people sign up to be notified when people over the age of 65 would qualify for the vaccine in the Gem State about a month ago.

Before the state's next phase of the vaccine rollout, the district handled online scheduling well due to the smaller groups in the first phase; healthcare workers, school districts, assisted living facilities.

But at 8 a.m. Saturday when appointments opened online, it seemed like the county's 30,000 seniors all went to sign up at once.

"Well as you can imagine when we opened the flood gates on Saturday morning, 2,000 appointments were scheduled within 20 minutes," Rackow said. "We knew it was going to be significant demand but we did not, I think, adequately plan for how we were going to better manage that not knowing that it would fill up in 20 minutes."

By 9:30 a.m., Rackow said they knew they needed a new plan to make the process easier for seniors. After a few days, they had a new plan. The notification list was now a waiting list and people have until Feb. 11 to sign up for it.

"On Feb. 11, our plan is to everyone that is signed up on the list we will use a random number generation computer program and randomly assign a number to a person and then we will just start at the top of that and start slotting those people into appointments for clinics throughout our eight-county health district," they explained.

Appointments will begin on Feb. 19 and anyone not included in the initial round of vaccinations will slide into the next available opening when the shipment of vaccines arrives.

"Well there's going to be shuffling on our end anyway because we're scheduling six or eight weeks out, its likely people will have an opportunity to get a vaccine at another provider," Rackow said. "So we'll just keep working that list moving people forward as people drop off and yeah it's going to be work on our end but we're willing to do that to keep it as simple as possible for the seniors."