How to spot the fake money order and the fake buy too! 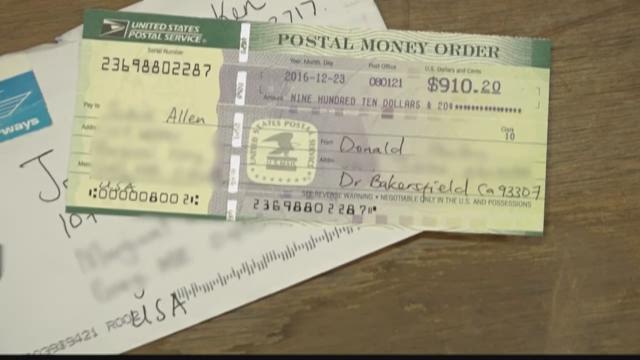 You've got a sofa, an office chair and a GoPro for sale on Craigslist. It's pretty common.

So now let's talk payment. You know better than to take a personal check, they can bounce. You're not a small business, so you don't have a square to take a credit card and seriously, no one carries cash anymore it seems. How about a money order? They are pretty standard and considered safe. Except when the money order is a fake.

You may not know how to spot a fake money order (2 Wants To Know is tells you in this article!) And you may not know the scheme that comes along with the fake money order. So let’s get into that. The story starts with a $150 sofa.
Tawnie Allen wanted to help her mom and dad sell their sofa. She posted it for $150 and got a buyer.

“He asked if it was ok to send a money order. We went ahead and said that was alright and he said it would be on its way.”

But the money order was for more than $900, way more than expected.

“That sent a lot of red flags and I told my mom not to cash it and she knew it didn't sound right to her either.

The family took the money order to the post office and confirmed their suspicions.

“The postal employees there were able to tell them the money order was in fact a fraudulent ,“ says US Postal Inspector Emily Spera.

Postal inspectors say it's common for schemers to send checks or money orders for more than expected price and ask the seller to return the difference.

By the time banks realize the check or money order is a fake – it's too late and you're out the money. That’s right, YOU are out the money. Most banks will tell you they are not liable for fraudulent checks. If you spent the money, you spent your money.

HOW TO TELL IF A MONEY ORDER IS FAKE

An expert explains, “If you hold up the money order and you are unable to see the watermark along with the strip that is illuminated. Once you hold it up at the light, if there's some markings by the amount that might look like it has been erased."