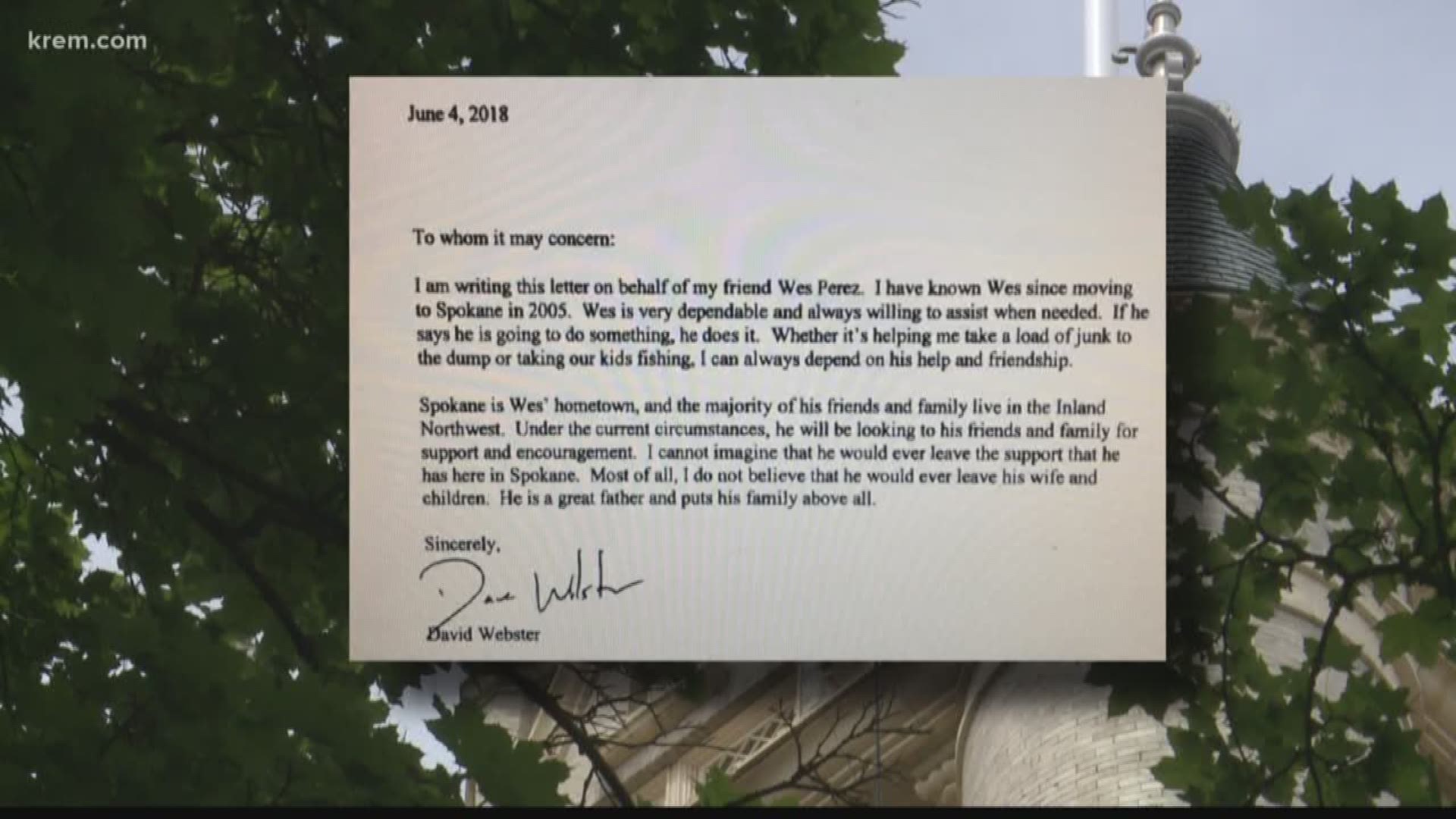 SPOKANE, Wash – A judge lowered the bond for a Mead High School teacher accused of having sex with a student on Thursday morning.

Perez’s bond was dropped from $100,000 to $50,000 on Thursday. Perez is charged with sexual misconduct with a minor and communication with a minor for immoral purposes.

On Tuesday, Perez’s wife, Beth, requested that his bond be lowered so that Perez could return home to help take care of their three children. In a letter to the judge, Beth explained that she is an overnight nurse and is having a difficult time finding childcare.

She assured the judge that Perez would be at his next court date and is not a flight risk.

The court also recently received another letter of support for Perez from his friend, David Webster. Webster writes Perez is dependable and he cannot imagine Perez would leave the support he has in Spokane.

In the hearing Thursday, the attorney representing the alleged student victim spoke on her behalf.

"The minor victim and her parents are in constant fear if this man is released or allowed to be released on or, that he will continue to do what he did in the past," the attorney said.

Perez is scheduled to appear in court again on July 30.

Court documents show authorities first started investigating Perez after someone sent an anonymous letter to the school. It claimed he was in a relationship with a 17-year-old student at the school.

Court documents previously released gave more details into Perez’s relationship with the student. The two had met during a leadership camp during the 2016-2017 school year. Court documents said during the camp, Perez hugged the victim, lifted her off the ground and said, “I don’t want to let go.”

A few weeks later the victim said she gave Perez her phone number. The day she gave him her number, they had a six-hour conversation where he told her he had feelings for her and he knew they were wrong. They later exchanged Snapchat information. The victim said she told two friends about the relationship.

Court documents said they met several times outside of school and in his classroom. During the meetings, the victim said they would make-out and he would sometimes write her notes to excuse her tardiness to her next class. She said for the remainder of the school year she would continue to meet Perez in his classroom before and after school until another teacher confronted him about the visits.

Court documents said over the summer break the two would continue to meet up outside of school.

She said he would drive her to a different location where they engaged in oral sex and other sexual contact. Then, later during the summer the victim said Perez became “distant.” Court documents said she believed it was because he went to Alaska on a fishing trip and his wife had just delivered their third baby. Washington State records confirm that Perez was married during the time he was allegedly having the relationship with a student. The victim said around July 29, 2017 she sent Perez a message saying she could not continue doing “whatever this is.”

According to court records, the victim said around the second weekend of October 2017, Perez messaged her on Snapchat and they began speaking again in “friendly” terms. Then on a Friday in October, the victim said Perez messaged her and asked her if she wanted to come to his house because his wife and children were in Seattle. The victim said she told her parents she was going to the Mead High School football game. Court documents said the two had sexual intercourse while she was at his house. According to court documents, they met up three to four more times to have sex. They would meet on nights where her parents thought she was at a school function and Perez’s wife was working, according to documents. The victim said they would sometimes have sex while his children were asleep upstairs, court documents explained.