With policing under the spotlight amid national police brutality cases, departments including Spokane's are having trouble hiring new employees. 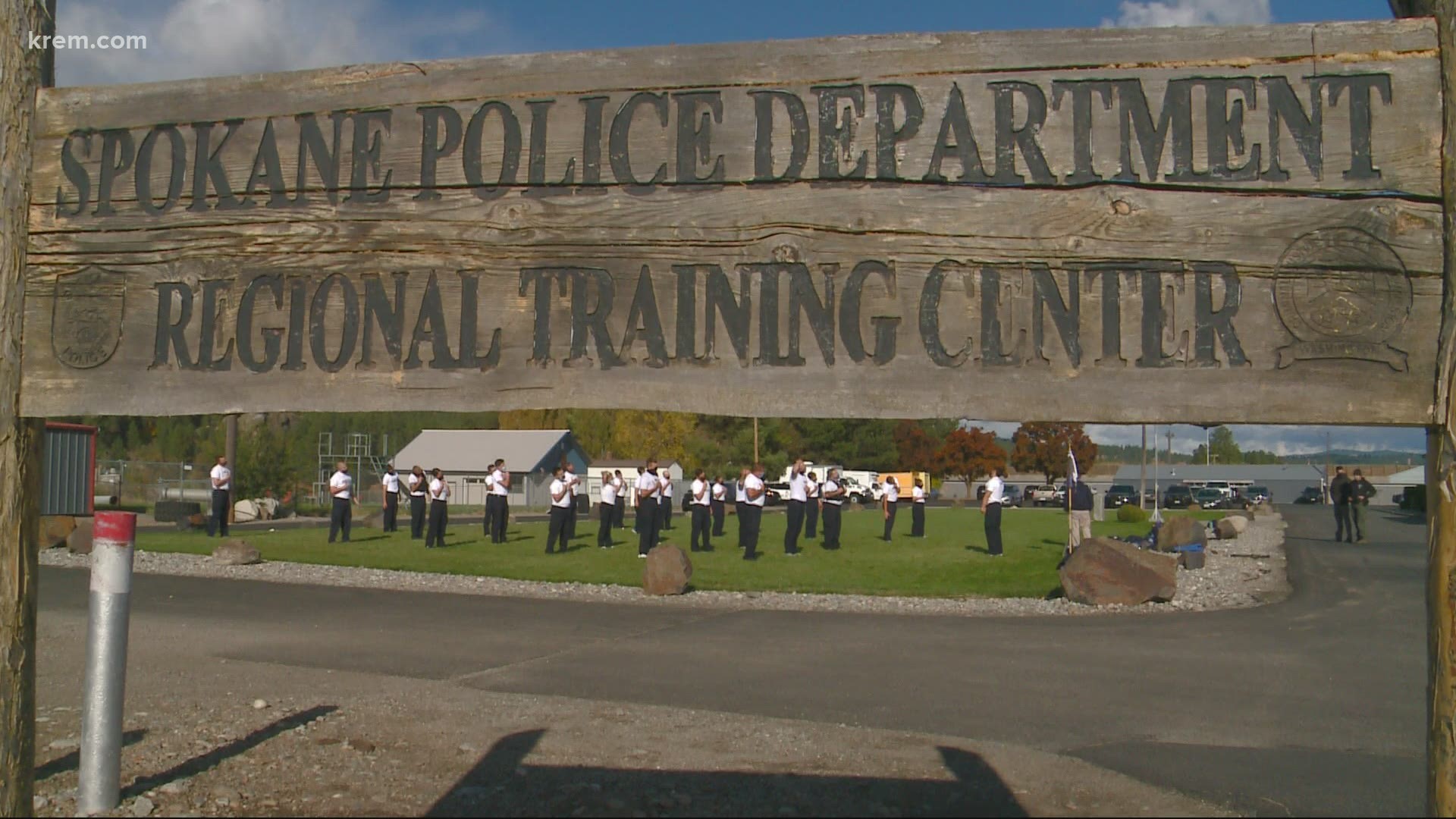 SPOKANE, Wash. — This year, policing in America has been put under the microscope, with demonstrations against police brutality and racial injustice taking place across the country.

Spokane has been no exception, with multiple protests, one of which turned violent, taking place throughout the summer months in response to police killing people of color.

In turn, this has presented a new challenge for police departments across the country and here in Spokane: hiring new officers.

"It can be fearful. You get put in scary situations. But on top of that, now, you're put under a microscope," said Jake Jensen, hiring coordinator for the Spokane Police Department.

He said finding the right candidate to become a new officer has never been easy, but today, it is getting harder.

"When I was hired 19 years ago," Jensen said. "I remember hundreds and hundreds of people showing up wanting to be a police officer. Now, we're talking about maybe 40 that show up for a test."

Between politics, high-profile shootings in other cities and the protests that often follow, Jensen said many people are no longer up to the challenge of a career in law enforcement.

"You could literally do something where all your intentions were good, but it had a bad outcome, and now all of a sudden, you're blasted all over the news, and potentially your life is ruined," Jensen said.

RELATED: Many Seattle protesters arrested are white, from other cities, analysis finds

When asked if the current political climate is making it harder to attract new recruits, Jensen said, "definitely."

"We try to go to the recruiting fair, and you go after the 21 year old and entice them into a career in law enforcement," Jensen said. " And it's like, it just sounds like a big headache to them to take on that responsibility."

Activists today are calling for reforms to police departments and how they operate, both locally and nationally. But in many ways, Spokane started making critical changes years ago, starting after a police officer killed Otto Zehm in 2006.

Officer Karl Thompson was eventually convicted in the brutal baton beating of the developmentally disabled man, and the Department of Justice later came back with a full review of SPD, recommending 38 fundamental changes to limit use of force and improve the department's relationship with the community.

Thompson served four years in prison and six months on house arrest. He was released from prison in February of 2016.

Changes included increased mental health and bias training, community programs, and a more formalized role for the office of the ombudsman to increase oversight and accountability.

Officers tell KREM those changes that were implemented eight years ago have put them ahead of other departments that are now struggling to adapt.

Travis Rosengrant is one of SPD's newer recruits, who signed up 2 years ago. His supervisors said life experience gave him the tools he'll need in a new era of law enforcement.

"I was born and raised in Spokane, kind of grew up in some sort of differing circumstances," Rosengrant said. "I had some bouts with homelessness, stayed at the Salvation Army for a short period of time trying to live where we could. It just kind of showed me a different side of the city. Just understanding how different people live. To me, it's, 'I've been there, I get it.' So I can kind of connect with them on a different level."

Jensen said that this gives him perspectives others might not have.

"That is the prototypical person I'm looking for, as far as character," said Jensen. "He's experienced a life that a lot of us haven't, and he's come out all right. And it makes him a better cop because of that."

But Jensen added while attracting new officers is getting harder, keeping the officers they have has been easier. He credits some of the reforms the department has already made.

"A lot of it, we've kind of already committed to, and we're working on," Jensen said. "So, the officers that have been around a while have already bought into the change that's occurring, so it's not as stressful."

"I loved going to work, but I dreaded every call [in Austin]," he said. "I loved my coworkers, I loved the job, I did. But I would worry, 'Is this the call that ends my career?' I began to watch the city lose its support for the officers, city council members began to strip away funding for the city, and the administration began to hold officers to an unreasonable standard."

What may be a challenge in other departments is turning into one of Spokane's biggest recruiting tools. With 10 open positions at SPD currently, there have already been 170 applications. Since May, a full 19 Seattle Police officers have applied to the Spokane Police Department.

Jensen said he often asks officer transfers why they want to leave their current department.

"We sit down and we interview them and talk about their motive to make the switch," Jensen said. "And a lot of it is geared toward that, not necessarily the community support, but the political support. It really just eats at them."

Butler said even a pay raise wouldn't have made him stay in Austin instead of moving to Spokane.

"I wouldn't work there for twice the wage they're offering. And the reason I wouldn't is because you're going to worry about your criminal and civil liability on every call you go to. Because [that's] the way the city operates," Butler said,

And while both officers agree, law enforcement is changing, they hope some things can stay the same.

"That slippery slope of cities like Seattle and Portland, where officers don't feel supported, that can expand to other places," Butler said. "And I wouldn't want that to happen here."