KREM investigates: Should fewer politicians sit on the Spokane Regional Health Board?

The firing of Dr. Bob Lutz has led to unprecedented scrutiny of the board, with some questioning its makeup and possible political motivations. 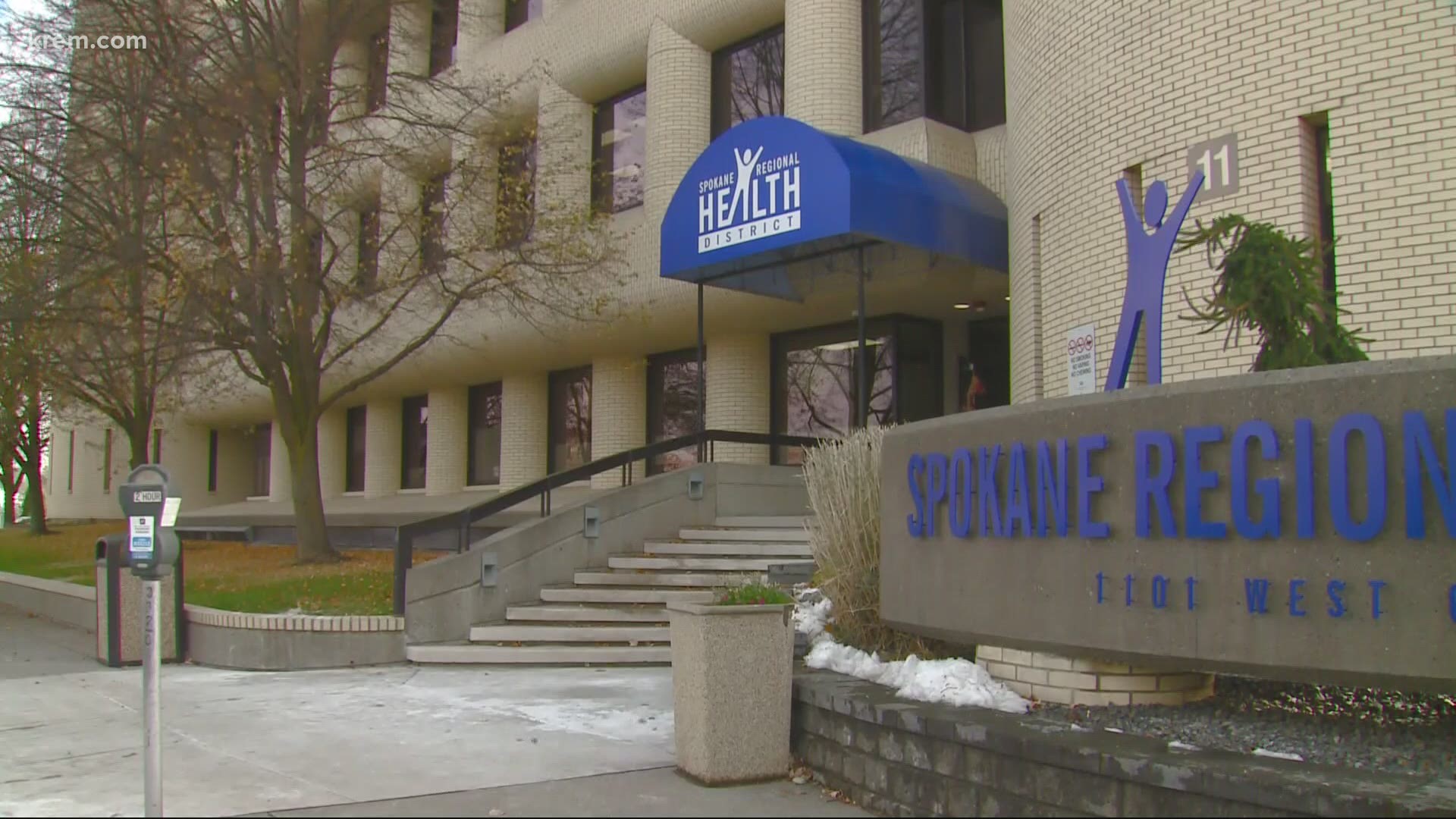 Lutz was then replaced with interim health officer Dr. Francisco Velazquez. But the decision to let go of Lutz led to unprecedented scrutiny for the health board, especially surrounding its political makeup.

Former Spokane City Council President Ben Stuckart is one of several local community members who has filed official complaints with the Washington State Board of Health, suggesting a lack of public health experience on the board may be the real problem.

“We have nine out of 12 members that have no public health background, and then they get the appointments,” Stuckart said. “And so, you end up with a Board of Health that’s making these decisions that affect all of our health in our community, just made up of elected officials.”

Maria Howard, a volunteer ethicist with the Spokane Regional Health District, also filed an official complaint. She has seen the county’s coronavirus response from the inside while working with SRHD.

“We need to make sure to rally around people with experience in public health with experience of medicine. So that choices being made will reflect science and data and reflect the good of the community,” Howard said.

RELATED: A timeline of the firing of Dr. Bob Lutz and Spokane's spike in coronavirus cases

Who’s on the Spokane Regional Health Board?

As of right now, the board is made up of the following:

Of these 12 members, only two have any medical or health experience. Frostad has been licensed in dental hygiene since 1989, and Kinley has been a licensed naturopath since 2016.

Kinley is also part of the anti-vaccine movement and has close associations with controversial lawmaker Matt Shea. Both have spoken out against masks and Washington Governor Jay Inslee’s stay-home order in the spring.

The politics of the board

The makeup of the board in light of Lutz's firing raises questions: How much do politics play into public health decisions? Should the county have more medical professionals on the health board to limit political influence?

KREM reached out to all 12 members of the Spokane Regional Health Board to get their thoughts, but only Beggs responded to our request for comment.

“I don’t see that as a problem as long as everybody stays in their lane…it’s fine for health board members who are elected to say, ‘I think these things are too extreme, and we have to balance health with the economy,’” Beggs said. “It’s just that neither side should be able to censor the other.”

For example, Tacoma, which is similar in size to Spokane, has one medical doctor who serves on the board from the Pierce County Medical Society. In Boise, three medical professionals are on its health board, including a medical doctor, a nurse practitioner and a retired nurse, the last of whom serves as board chair.

When asked whether the board should have more medical professionals, Beggs said, "not necessarily."

He added that disagreements aren’t uncommon for a group like the health board.

“We might be grumpy or disagree, but that happens all the time in government. Different people have different powers, and that’s why we have checks and balances,” Beggs said.

But when it comes to concerns about politics having too much influence on public health, Beggs said it’s impossible to prevent such worries during a health crisis.

“I think that is always a problem when we have health crises and you can’t stop it. But as long as you empower the independent medical [professionals] so they have an unfettered platform, then I’m less worried about it,” Beggs said.

Spokane mayor makes her feelings known from the outside

Spokane Mayor Nadine Woodward is not a member of the health board, but shortly after the board made its decision to fire Lutz, KREM received a letter she had submitted to the board about the possible firing.

In the letter, Woodward said her “initial reaction when I first heard the news was it’s the best news she’d heard in a long time.”

RELATED: Read Spokane mayor's letter to Board of Health ahead of Dr. Lutz meeting

She told KREM that she simply wanted the board to know they had her support, no matter what decision they made.

“I wanted to express to the health board, whatever decision they were going to make, I was going to support,” Woodward said. “And that I saw it, really, as an opportunity to once again work collaboratively with our regional partners, something we haven’t been doing for quite a while.”

Lutz’s attorney, Bryce Wilcox, has since called out Woodward’s letter and said the board’s “political and economic motivations” were clear.

“I think my letter also expressed a level of frustration that the breakdown has now resulted in one agency and one person making those decisions,” Woodward said.

When asked, Woodward said politics didn’t play a role in her frustrations.

“Certainly not in mine and certainly not in the health board’s decision. It wasn’t until we all watched that meeting that we found out what the problem was, that it was an internal conflict,” Woodward said. “That was something that we all learned. But for me, it’s not political at all.”

When asked about whether putting medical professionals on the board would be a good idea, Woodward was open to the idea.

“I don’t know much about the political makeup of that board, as far as how it got to where it is…I think that’s a good case, I think maybe we do need some more diverse voices on that board,” Woodward said.

But, the mayor also thinks political leaders play an important role, and that medical professionals and local leaders have to learn to work together.

“Those kinds of messages that come from the health board or the health officer, [they] need to be relayed back to the communities by us, the elected [officials], and the community leaders,” Woodward said. “Well, I don’t think that just because elected [officials] are part of the discussion and part of the decision making, that it’s all political,” she said. “I mean, we’re a region, and we need to be working together on many things outside of this pandemic. I think that makes us stronger when we’re working together.”

After the news of Lutz’s firing broke, the Spokane County Medical Society wrote a letter that gained hundreds of signatures from local medical professionals.

Dr. Stephen Pakkianathan, a local OB/GYN, is the president of the society. He told KREM that the letter was written as a way to show support for Lutz.

“It was done quickly to gain support. Of course, that was before the board meeting or anything else came out, so what we did go through was note our support for the work that he has done and what the regional health district has done,” Pakkianathan told KREM.

Pakkianathan, who called Lutz’s firing “surprising,” also said that having medical expertise on a health board is important.

“I think it’s really important to have medical experts on that board. I think there’s certainly a role for administrators for the county, the people who are involved in the funding and politics of it that look at healthcare in a different light,” Pakkianathan said. “But, it’s extremely important to have partnership with healthcare experts.”

He added that it would be better if the board had an even split – six medical experts along with six community members or politicians.

Another concern people have raised is about Lutz’s replacement. While Velazquez is a medical doctor and has served as president and CEO of a Spokane-based lab company, some are worried about the fact that he is only serving in a temporary role until a permanent county health officer can be hired.

Part of this concern comes from the fact that the last time there was a vacancy at county health officer, it took the board two years to hire Lutz to fill the spot, and that wasn’t during a global pandemic.

But Pakkianathan said he isn’t concerned about Velazquez due to his background.

“I think it's necessary to have someone a physician is trained really well to deal with the healthcare, the specifics of healthcare. So, is there harm for not having someone who is just being an interim? No, I don't think so,” Pakkianathan said.