The pandemic sent students in rural Quincy, Wash. home. Now, they have 100% participation

The Grant County school district shelled out thousands of dollars a month to help their kids stay connected with remote learning. 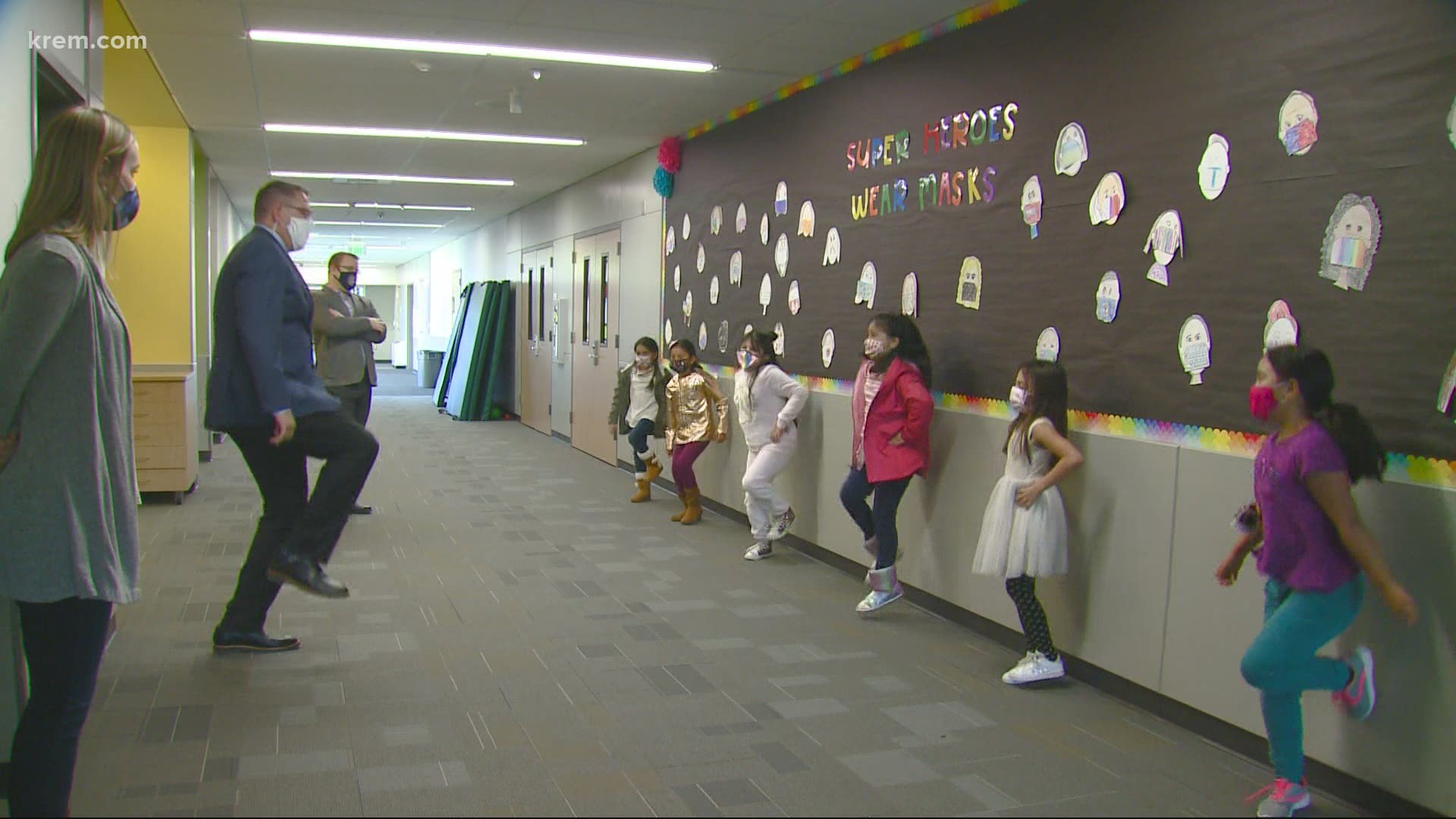 QUINCY, Wash. — When schools across Washington had to switch to distance-learning models this spring due to the coronavirus pandemic, teachers and administrators found themselves with just days to figure out how to connect with kids from a distance.

While this was difficult for most districts, the Quincy School District in Grant County saw a high number of students unable to connect with learning through either online instruction or the delivery of packets.

"So in the spring, we had about an 83 percent connectivity with our students. So, about 17 percent of our students weren't able to connect," said John Boyd, Quincy School District Superintendent.

But in the few months between Governor Jay Inslee's decision to close schools in March to November, Quincy has managed to reach 100 percent participation between remote and limited in-person instruction.

Bringing students back online, into the classroom

By the end of November, the classrooms and hallways at Ancient Lakes Elementary School in Quincy were filled with the noise of students in class, or playing Simon Says in the hallway.

"I believe it's 175 students that we have coming back in person right now," Ancient Lakes Elementary School Principal Colleen Frerks said.

Students from Kindergarten to Third Grade now have the option of attending in-person classes at Ancient Lakes Elementary, according to Frerks. Students in higher grades or those who would rather not attend in-person classes can still learn remotely.

The district wasn't always able to have all of their students connected to class through in-person or remote learning. The district - which Boyd said covers about 450-square miles - had to find ways to connect with students who lived in remote areas.

To combat this, the district bought about 450 mobile hotspots to help those without a reliable internet connection. They would also send IT staff to students' homes to troubleshoot problems.

But even then, the geography of the district meant this didn't solve all of their internet problems.

"There is a subset of students in a 450-square-mile rural district, you have areas where there really isn't even cellular coverage," Boyd said.

The district turned to delivering paper packets to students who couldn't connect to the internet when they delivered food. The district also translated packets to Spanish, an important task for a district where 52 percent of students live in a primarily Spanish speaking home.

These challenges that the district faced and overcame in the spring has led to greater success in the fall.

"At the beginning of this year, we were able to get that up to about 97%. And I believe right now we have 100% connectivity," Boyd said.

While the push to connect with students remotely was a large part of the districts efforts, faculty and the community were happy to be able to send at least some students back to classrooms.

Learning math and the other basic subjects covered in early education wasn't the only aspect making in-person instruction important to both staff and students' families, according to Frerks.

"One of the really important things in elementary school is learning those social emotional skills. How do you interact with others? How do you collaborate with people? How do you get along?" Frerks said.

Connecting with students not the only challenge

While the district has seen success when it comes to making sure no students are falling behind due to the pandemic, administrators now face another challenge: paying for these new methods of teaching.

The district did receive CARES Act funding to help with the hotspots, but it wasn't enough. Boyd said the district has had to tap into its reserve funds to cover the expenses.

These hotspots are just one factor in a budget shortfall caused by the pandemic. According to Boyd, the district is also getting less transportation funding from the state because they aren't transporting as many students. But the district still has to pay their drivers, who are making trips to deliver food to students.

Quincy has taken steps to help alleviate future financial burdens, as Boyd said the district has implemented a hiring freeze and made attempts to curb spending.

But even then, the superintendent said they took concerns to the state for more transportation funding to cover food deliveries, and for money to offset the hotspot expenses.

"We're dipping into our reserves to be able to support what we need to do right now, and then also trying to work with our legislators to see if there's ways that they can support us so that we can get the job done in the way that we need to do," Boyd said.

KREM reached out to the three state legislators that represent Quincy in Olympia.

Senator Judy Warnick said in a statement that she is aware of the problem and is helping work to develop a plan to help with funding.

"I have heard from many school districts about the potential loss of funding due to less ridership numbers. We have been working to develop a plan that will protect those districts, especially the small rural districts from this funding issue. Bus transportation is an integral part of the school system, especially when many districts are using the buses to deliver meals and educational materials to their remote learning students," Warnick said in a statement.

Representative Alex Ybarra said in a statement that he hopes that one of the first things accomplished in the upcoming legislative session is an amendment to the state's school transportation funding model.

"Yes, we are very aware of the transportation issue. My hope is one of the first bills past when we get back to session will be amend the law so school districts do not lose transportation dollars," Ybarra said.

Representative Tom Dent did not respond to KREM's request for comment by the time of publication.

Have a tip for our investigative team? Email us at investigators@krem.com