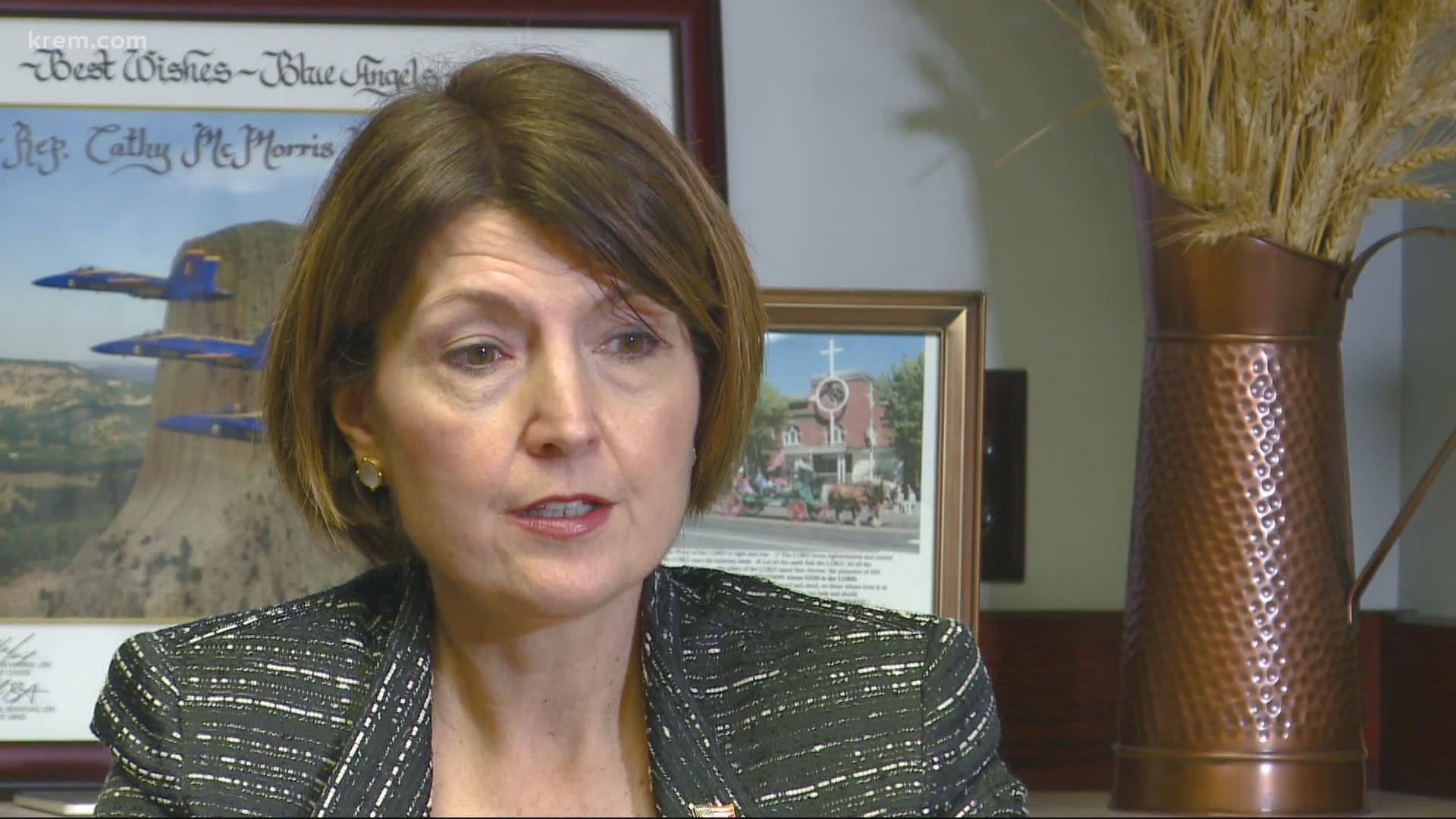 In her first on-camera interview since the insurrection, the congresswoman answered questions about what it was like inside the Capitol during the riots, her thoughts on election fraud and the divisiveness in America.

Note: This interview may have been lightly edited for length and clarity

Cathy McMorris Rodgers: They asked us to stay in our seats, and not to leave. They start locking all these doors.... chh, chh, chhh.

Whitney Ward: Were you afraid?

McMorris Rodgers: You know, I wasn't afraid in that moment.. It didn't feel good to sit there. I'm not sure I want to be here... if something goes down, I think I want to get out of the House. It felt like people were taking it into their own hands, that there was a lawlessness attached to it and that is un-American and it disturbed me a lot.

Ward: Do you think the President played a role?

McMorris Rodgers: I think there were, yeah, a lot of things that happened. I think most of the people that came that day were really intent on keeping peaceful and really wanted to highlight some of their questions and their concerns.

Ward: But do you think the President's speech out there, to the crowd, helped incite that riot?

McMorris Rodgers: There's a... there's a... you know... he didn't give them the direction to do that.

Ward: You released a statement talking about what happened at the capitol, especially after the second impeachment of President Trump. So, I just want to use your words here, "People on the right have excused and defended President Trump, including me. It meant turning a blind eye to arrogant, prideful and bullying behavior." Do you have regrets?

McMorris Rodgers: Well, I think... I think I also talk about people on the left, too. I think we all need to take responsibility. And in a government that is that is the greatest experiment in self-governance, it requires individual responsibility. And so, I hope, in the midst of all of this, that we all really look at what we can be doing to restore civility, and these values that we have long-admired and upheld as Americans.

Ward: What does that mean to you? What can you do differently?

McMorris Rodgers: I want to highlight that I have spoken up, and I have at different times, especially during some of the things that President Trump said, I did speak up.

Ward: Do you believe there was widespread fraud that impacted the results of the election, and the outcome?

McMorris Rodgers: I said from the very beginning that my objection was not to overturn the election. My objection was to answer some questions. Because I believe election integrity is foundational, and I concluded that until those questions were answered, we would not have trust and confidence in the elections. That millions and millions of Americans would not have trust and confidence in our elections.

Ward: But hearing from elected lawmakers in the GOP saying the election is being stolen. Hearing that, do you believe that played a role, though, in people out there in America, thinking, well, if they think so, then yeah, it must be being stolen?

McMorris Rodgers: I think, in my mind, it was... it was about addressing changes that were made in election procedure. I am concerned that we must take action to protect election integrity. Because if we don't have election integrity, we'll lose it all. We'll not have the peaceful transfer of power in the future, and we won't have our Constitution.

Ward: How do we move forward from here? How can we possibly come back from this brink that we're at right now.

McMorris Rodgers: Hmmm.... we come back by each one of us, each one of us, recommitting to being a person, a person who seeks understanding. A person who is putting the other person first. And with COVID, and the Presidential election, there's a disproportionate focus right now on politics. The news right now is all about politics. It's kind of become our entertainment. We don't have a lot of other entertainment. For some, it's their religion. And I think politics is one piece of it. What happens in Washington D.C. matters. What happens in Olympia matters. What happens in the city with our mayor and our county matters. And all the school boards matter. But I also... what happens in our families matter. What happens at our businesses matter. The way we treat people, the way we talk to people. Every single one of us has a role to play. My hope is that Spokane is a place where it starts, where we will take those steps that will bring hope and healing to families and to our community and that we'll be a model for the rest of the country.