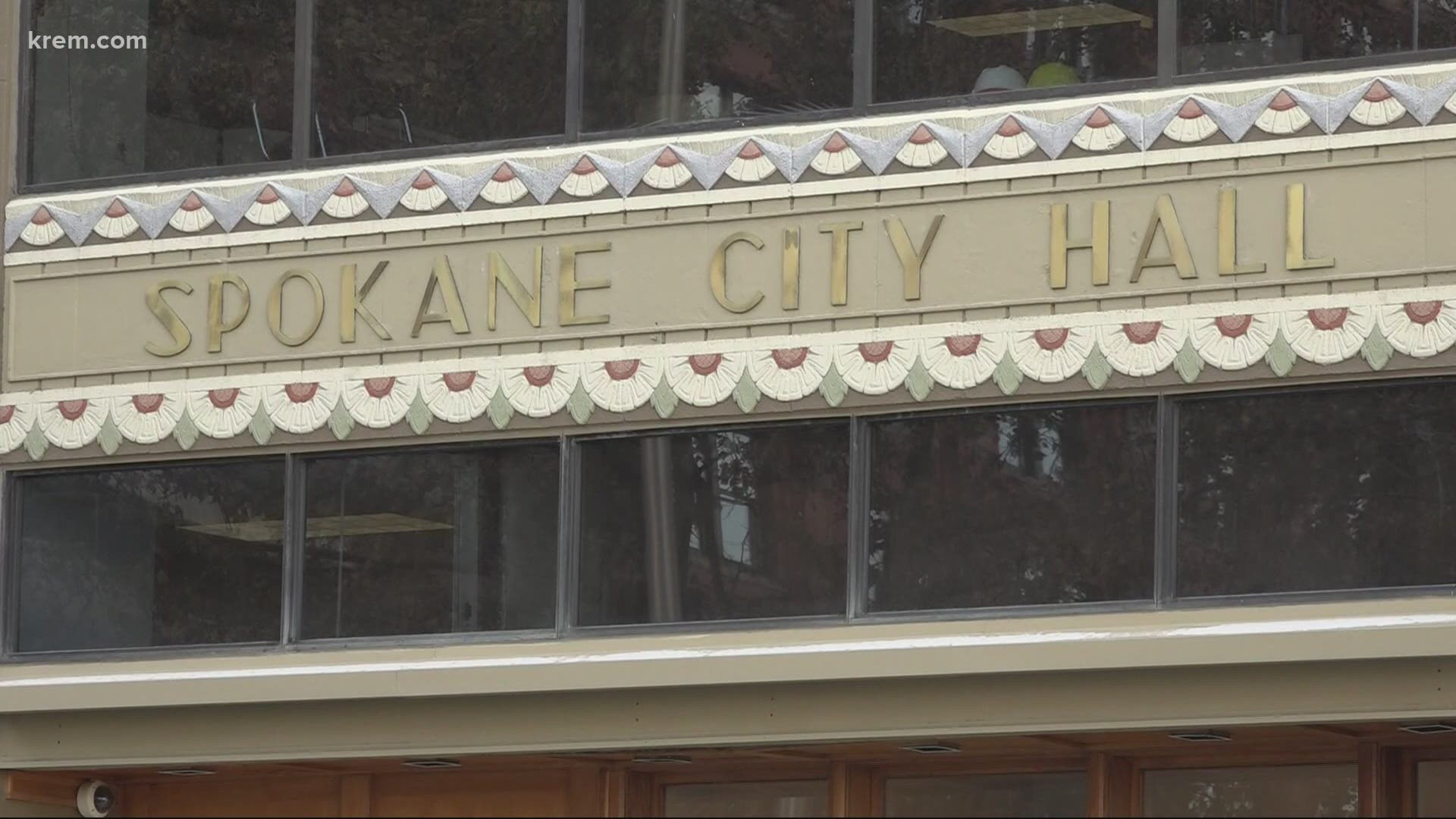 SPOKANE, Wash. — A review by the Washington State Auditor's Office (SAO) Office conducted at the request of Spokane Mayor Nadine Woodward flagged concerns related to policies and practices of the city's Community, Housing, and Human Services (CHHS) department, including potential conflicts of interest.

The SAO confirmed that potential conflicts of interest involve former Spokane City Council member and mayoral candidate Ben Stuckart and Kelly Keenan, who works for Catholic Charities and resigned from his role as Director of CHHS in 2019.

In a statement released on Monday, Catholic Charities of Eastern Washington and the Spokane Low-Income Housing Consortium, where Stuckart now serves as Executive Director, disputed the findings and claimed that the SAO report contains inaccuracies.

Woodward reported concerns to the SAO and requested the audit following employee concerns related to the city's work with community organizations that operate public and human services. The audit was conducted over the past year and looks at the time period of Jan. 1 to Dec. 31, 2019.

“Our employees raised questions about some of our processes and procedures that we felt required outside review,” Woodward said in a press release on Monday. “The State Auditor’s Office conducted a thorough examination of the concerns and provided us with excellent guidance and recommendations to avoid a repeat of this situation.”

The CHHS department is part of the Neighborhoods, Housing, and Human Services division in Spokane. Woodward appointed Cupid Alexander to oversee the division in November 2020, which is outside of the time period that the audit addresses.

The employees and elected officials noted in the final report all left employment with the city prior to 2020, city leaders noted in the press release.

The SAO reported the following findings in four areas.

The CHHS department did not comply with city policy and procedure for two contracts awarded in 2019, according to the SAO report. The city's purchasing policy requires informal competition.

CHHS did not provide documentation to demonstrate that it sought multiple bids as required by city policy, according to the SAO findings. The contracts were for flooring repairs of $11,400 and $13,300.

The CHHS department follows an informal practice to award sub-recipient services rather than relying on adopted polices and written procedures.

In the state's review of three warming center contracts approved in 2019, the CHHS department could not provide evidence that it solicited a request for proposal or performed a competitive bidding process for the agreements. The agreements were for $881,482, $740,000 and $495,841, according to the SAO report.

The SAO report also found that two of the three previously referenced warming center contracts had an "appearance of a conflict of interest."

A former City Council member, identified by the SAO as Ben Stuckart, participated in an award process that included an organization whose founders contributed to his mayoral campaign during the 2019 election.

In November 2019, the CHHS department recommended awarding $740,000 for an agreement to a sub-recipient identified as “high-risk” during a July selection process. The SAO confirmed that the sub-recipient was Jewels Helping Hands. The "high-risk" designation was due to an "unclear relationship with a charitable organization," which the SAO confirmed was Smith-Barbieri Progressive Fund, that Jewels Helping Hands identified as a partner, according to the report.

Department staff said Stuckart participated in the July 2019 award process, according to the SAO report. The Public Disclosure Commission website shows that the founders of the Smith-Barbieri Progressive Fund contributed to Stuckart's mayoral election campaign in 2019. Although the city did not award the July 2019 agreement to Jewels Helping Hands, the relationship still existed when the department recommended and the City awarded the November 2019 agreement, the SAO report says.

In the second instance, CHHS also recommended a warming center agreement for $495,841 in November 2019. Department staff said a director responsible for the shelter and warming center programs — identified as Kelly Keenan —  participated in awarding the agreement to Catholic Charities and then left the city for employment there, according to the SAO audit.

Keenan, who served as Director of Community Housing and Human Services, submitted his resignation letter to former Spokane Mayor David Condon in October 2019. He did not provide a reason for his resignation.

The SAO also noted that Keenan left the city in October 2019 before the agreement with Catholic Charities was approved.

The City’s Municipal Code and state law "prohibit municipal officers or employees from participating in the making of contracts in which the officer or employee has a beneficial or personal interest, either directly or indirectly," according to the SAO report. The Municipal Code requires employees to notify supervisors or appointing authorities of potential conflicts of interest, and for supervisors or appointing authorities to resolve and document the disposition of the potential conflicts of interest.

No documentation existed to show that the department or city resolved the potential conflicts of interest, the SAO report says.

Catholic Charities of Eastern Washington (CCEW) and the Spokane Low-Income Housing Consortium said in a joint statement that the City of Spokane approached CCEW in November 2019 to operate a low-barrier emergency center for families experiencing homelessness. Catholic Charities initially passed on the request, but agreed after the city stressed that "other providers had declined and the public need was emergent."

Keenan "was not involved in negotiations or approval of this warming center contract as his last day of employment of the City of Spokane was October 11, 2019," the statement reads in part. Additionally, Keenan "was not offered a position at Catholic Charities until months after he left the City of Spokane and this is not unusual, as CCEW has been hiring former City employees for decades," according to the statement.

Senior leaders with Catholic Charities and leaders of the Spokane Low-Income Housing Consortium were not contacted for an interview by the city or state auditors, according to the statement.

Additionally, Catholic Charities said the SAO report's assertion that Keenan was involved in the contracting process for a warming shelter is "inconsistent with CCEW’s recollection and records."

"CCEW does not believe that Mr. Keenan was involved in the contracting process for CCEW’s involvement in the warming shelter and a public records request could easily verify that," the statement continues.

The Spokane Low-Income Housing Consortium also asserts that the claims about Stuckart are inaccurate.

"We strongly encourage the SAO and City of Spokane to revisit the concerns that were raised and speak directly to the involved parties in order to get accurate information," the statement reads. "Because these inaccuracies exist and could easily be fact checked, we hope the broader report will be re-reviewed. We know the mayor and SAO are committed to transparency and accuracy."

CHHS also reimbursed a consulting agency for two mortgage payments and one car loan payment for one of the agency’s employees in 2017 totaling $2,453, which are personal, non-business expenses, according to the SAO report. SAO identified the consulting agency as the Center for Justice.

Department staff said a director approved the payments to the Center for Justice as an alternative form of compensation for the employee's service hours worked under the agreement, according to the report.

The city committed in its response to the state auditor to do the following:

“I commend the Mayor and the CHHS Department for formalizing new procurement rules that should prevent future questions,” Spokane City Council President Breean Beggs said in a statement. “I believe that even the appearance of a potential conflict is concerning and will work to ensure that RFP respondents are confident that they have an equal playing field.”

Kathleen Cooper, a spokesperson for the SAO, said in an email to KREM that the city's next scheduled accountability audit will begin in the fall of 2021 and cover fiscal year 2020. The SAO will begin following up on recommendations then but will likely continue to follow up in future audits to "ensure the city has sufficient time to address the items in this report."