Have you been hit with a Social Security scam call? Feds say it's a growing problem

The Federal Trade Commission says complaints increased tenfold from 2017 to 2018. 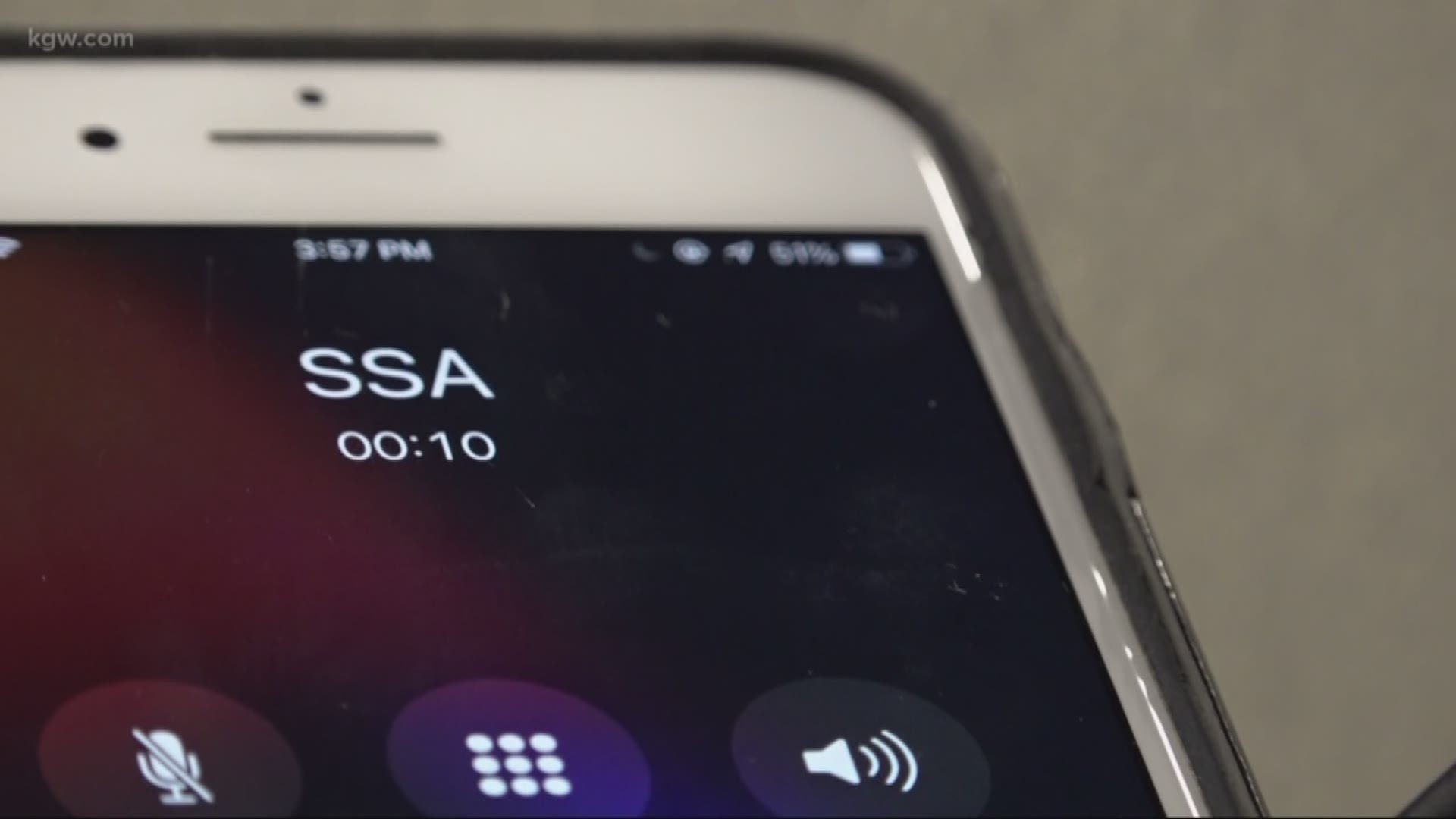 PORTLAND, Ore. — Here's a scenario that might sound familiar: a number that looks a lot like yours is calling, or maybe your caller ID says it's the government ringing you.

So, you pick it up and on the other end, a recording says your Social Security number or benefits are suspended.

If that does sound familiar, you should know it's the latest version of a government impostor scam - a common form of fraud in which scammers act as government officials and try to get you to give up personal and financial information or money.

The Federal Trade Commission (FTC) says complaints increased tenfold from 2017 to 2018: they heard from 3,200 people about Social Security Administration impostor scams in 2017, compared to 35,000 complaints in 2018.Those complaints in 2018 totaled $10 million in losses.

That’s just people who go to their elected officials or the government and file a report. Congress and the federal government believe the impacts and losses are much more massive than have been reported.

The newer twist on this scam: some of the numbers calling mimic your own. Others are toll-free numbers, and sometimes - an even scarier trick - your caller ID will show the Social Security Administration's actual phone number. But it's not the real agency calling.

RELATED: Phone call from your own number? It’s a scam

A few versions of this scam have been going around the last few months. The FTC posted one of the versions.

Recently, one version of the scam is a robocall from a scammer pretending to be from the SSA. The recording says your Social Security number has been suspended. It might prompt you to re-activate your number by calling a phone number back or by paying up.

Some victims and people receiving the calls tell us real people are on the other end of the line as well, that it's not just robocalls.

Portland resident Jessica Alsberg was hit with the call three times over the span of a couple days.

“Just vaguely threatening language trying to scare you into pressing 1, so that somebody in who knows where could collect your personal information,” Alsberg said.

She didn't fall for it, and even stopped answering her phone. But she can see how some people, perhaps those not as familiar with technology or elderly individuals, would be taken advantage of in this situation.

“It was very serious sounding. I'm not usually one who falls for spam calls. You know, the hotel saying, 'We're going to give you a free weekend!' But this one it kind of made me panic a little,” Alsberg said.

Scammers want you to panic because they want your personal information. More than likely, it's so they can access your bank account and drain it.

“I think most people do know it's a scam and let it go to voicemail or ignore it or hang up on it. But it doesn’t take many people to get a scam to be able to work,” Willamette University consumer law professor David Friedman told KGW.

“Which is either their identity being stolen - and people, I think, have a sense about what that’s like – or they think their Social Security benefits – which they’re depending on as a lifeline - are going to end,” he said.

The thing is, the Federal Trade Commission (FTC) says your Social Security number is never, ever suspended.

“This is outrageous that we can't stop this type of basic scam in America,” Sen. Jeff Merkley (D-OR) said.

Merkley wants to re-organize the Federal Communications Commission (FCC) and create a new robocall division dedicated to taking this on. He wants the FCC to crack down on fraud and reinforce and develop more regulations.

"We don't have a lot of information about who [the scammers] are or where they're operating from because we haven't been going after them aggressively,” Merkley added.

RELATED: End of robocalls? Phone companies can block them for you, FCC rules

Friedman agrees, but says catching these fraudsters isn't easy. Most of them are overseas.

"I think the key is to try to find a way to make this more expensive and difficult for the people pulling off the fraud. One way of doing that would be to educate people. But even if you educate people there's always the next thing,” Friedman said.

If you get one of these calls, contact the FTC and file a complaint immediately. You can also contact the Office of Inspector General with the Social Security Administration.

Listen to clips from two versions of the scam recording courtesy of viewer Kevin Thomson in the video that aired on KGW at the top of this article.