A backlog started in 2017 has caused delays up to 10 months in the issuing of death certificates, which could affect criminal cases and insurance payouts. 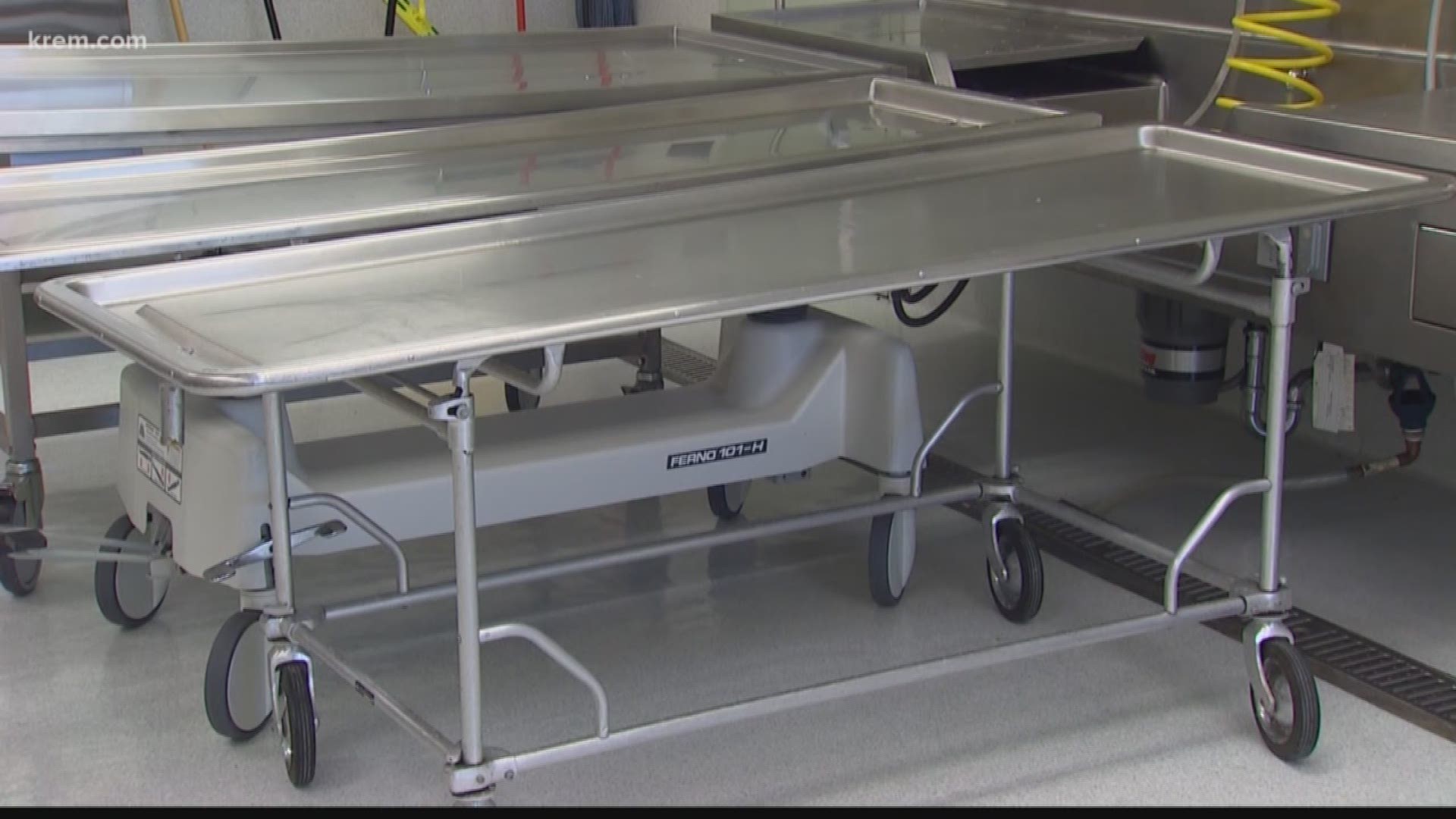 SPOKANE, Wash. — Since 2017, a backlog of evidence and testing at the Washington State Patrol Toxicology Lab, which does drug and alcohol testing for medical examiners and coroners statewide, has led to months-long delays in the issuing of death certificates in Washington.

The Spokane County Medical Examiner’s Office is one of the many affected by this backlog. On August 7, 2018, the SCME issued a statement on their website stating that a backlog started in 2017 at the state toxicology lab made it so the medical examiner’s office couldn’t even provide an estimate on how long it would take for test results to be issued.

Spokane County Medical Examiner Dr. Sally Aiken said the average turnaround time for these tests was 160 days in 2018. Aiken also said the longest turnaround was 313 days, but for 2019 so far, the average is down to 83 days.

Brianna Peterson, a WSP Toxicology Laboratory Manager, said the median turnaround time was between 19 and 22 days before the backlog began, and that the lab hopes to return to a 30 day average in the future, with some complex cases taking no more than 60 days.

Currently, she estimates the delay at 9 to 10 months for most cases.

The effects of this backlog in testing are widespread, including not being able to provide family members with a cause and/or manner of death for loved ones, a delay in processing DUI cases and the delay of insurance policies being issued.

“For death investigations, its impacting society in every way,” Peterson said.

Peterson also said the delays have been caused by an increase in caseload mixed with not being given a big enough increase in staff to deal with the higher demand.

Lack of closure, insurance for families

A problem brought up by both Aiken and Peterson was the lack of closure given to families for an extended period of time when there is a delay in a cause or manner of death ruling.

“Most importantly, the backlog has added to the burden of grieving family members who are seeking answers,” Aiken said in an email to KREM. “Each staff member has felt frustration in dealing with these toxicology report delays.”

“We’re a critical service for every member of society … or if you unfortunately lose a loved one, you are counting on our results,” Peterson said.

One such family looking for closure is that of Sharona Caroll-Camps, who died in the Spokane County Jail on June 11.

Caroll-Camps' mother, Jana Atkins, spoke with KREM about her daughter’s death and her time in the jail leading up to her passing, and said that she was told it would take almost a year to get toxicology reports to get back after the SCME said the cause of death was a possible overdose.

“The Medical Examiner said that they took toxicology samples, and they sent them out, but they’re five to 10 months back on getting those,” Akins said. “So, we won’t know the cause of death for sure, for five to 10 months.”

RELATED: 'She was begging for help': Mother of dead Spokane Co. Jail inmate speaks out

Aiken said her office lists the cause and manner of death as simply “pending” whenever possible so they can issue a death certificate, allowing families to then hold a funeral.

Death certificates with a certain cause and manner of death are issued when “there is a catastrophic cause of death that won’t be influenced directly by any future toxicology findings,” Aiken said.

However, this isn’t possible in the cases that involve a possible drug overdose, among other circumstances, Aiken said. She also said it opens the office up to possible criticisms of issuing certificate prematurely.

Aiken said families have raised concerns about these delays.

“We take our responsibilities to family members and public health most seriously, and yes, rightfully so, families are concerned,” Aiken said.

Another problem caused by the backlog of testing is a delay in life insurance payouts, both Aiken and Peterson said.

"If they don’t have our results, they can’t issue a death certificate. People aren’t able to get insurance payouts,” Peterson said. “It’s pretty horrible if you have lost a loved one and then can’t get closure, or you might need the money from that insurance payout.”

As for the SCME solution of issuing some death certificates with a “pending” cause or manner of death also isn’t adequate for insurance payouts in some cases, Aiken said.

Delays could carry over to criminal prosecutions

The delay caused by the backlog at the WSP Toxicology Lab can also bleed into criminal cases, as the prosecution may need the results for things such as DUI deaths.

“When the toxicology reports come back after a delay, it sometime becomes obvious that there is more need for investigation, and the trail now is six months or more old,” Aiken said.

Peterson used DUI cases as a specific example of the negative effects of the backlog, saying that the delays could put the public at risk.

“On the DUI side, they aren’t able to move forward with prosecuting cases, and then people can go out and be repeat offenders, and maybe end up killing somebody,” Peterson said.

According to Peterson, the backlog issue arose out of a combination of an increase in caseload beginning in 2013 and a lack of increase in staff to deal with these higher case numbers.

The backlog issue then began in 2017, Peterson said.

To combat this, the lab asked for more full-time employees to deal with the increased caseload and start working to cut down on the delay times, Peterson said. She said Washington Governor Jay Inslee approved the increase in funding in his budget, but that the portion that would fund more positions didn’t make it through to the final legislature approved budget.

Peterson estimated that the lab would need about four more full-time workers to start cutting through the backlog.

One attempted solution was the addition of six temporary employees in the most recent state supplemental budget, Peterson said, but a caveat to these positions is that it takes a year of training before new employees can start signing off on tests.

“Even though we were given the temporary employees last summer, there is a lot of training involved with being a forensic scientist,” Peterson said. “It’s not like you can hire them one day and they can start doing work and contributing to getting the cases out the next.”

Some of the temporary employees have hit their year mark and are doing work and being made full-time employees, Peterson said, and the lab has been able to hold the delay steady instead of allowing it to increase. But even with these new bodies in the lab, the expected delay in reports for 2019 will still be “huge,” she said.

Here in Spokane, the medical examiner’s office can’t provide much more help than they already do through the “pending” causes and manners listed on death certificates, Aiken said.

The SCME doesn’t do any laboratory testing in house, but does use local labs for testing that needs immediate results, Aiken said. An example she gave was a carbon monoxide test needing to be carried out to ensure there is not a potentially lethal leak somewhere in the city.

They also use local labs for non-toxicology testing, and Aiken said the lab doesn’t have a backlog currently.

The reason why more of this can’t be done here at home? Aiken said it comes down to cost.

The testing is expensive and is funded partly by a surcharge on death certificates, Aiken said, and trying to do it in-house would hurt taxpayers.

“Sending samples to a private toxicology laboratory would be at Spokane taxpayer expense,” she said.