It's simple, you basically spit into a tube and send it off. A few weeks later you get in-depth insight into your heritage and health. 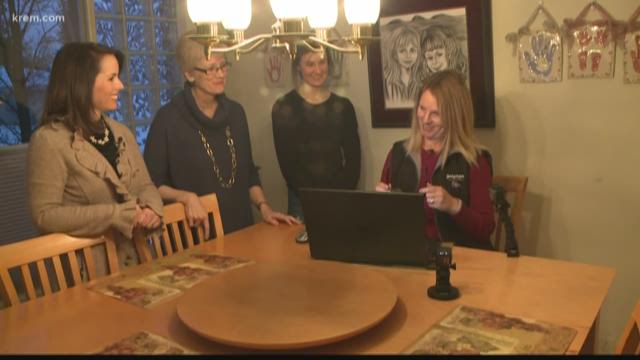 SPOKANE, Wash. -- Back in the year 2000, scientists finished what they called "The Human Genome Project" which was essentially a global effort to map human DNA.

Fast forward to today and at home DNA kits are hugely popular. You probably know someone who has done it. It's simple, you basically spit into a tube and send it off. A few weeks later you get in-depth insight into your heritage and health.

Maybe you have brown hair, green eyes and dimples. So where in this wide world did your ancestors pick up the traits you carry today? Families usually have their theories, right? These days DNA mapping is doing away with theory and drilling down to the genetic truth.

Washington State University DNA expert, Dr. Michael Skinner is kind of a big deal in the world of DNA science and he said the at home DNA kits are very accurate. This can be very helpful to people who do not have any family ask about where they came from.

"I know very little. I know they were here in Spokane and they were a young couple and they couldn't keep me for whatever reason," Mary Kramer said.

Kramer was adopted into a loving family with 12 kids, including her sister Kathleen. Over the years when people asked her about her heritage she would tell them she didn’t know. But, she wanted a better answer so she turned to the DNA test kit 23 & Me.

"There's no blood test, nothing. You spit in a tube and send it off," she said.

After several weeks, Kramer got her results and opened it with her family.

"I am excited! I'm nervous, which I don't know what I have to be nervous about but I am very excited to find out just some answers," Mary said as she got ready to open the test.

For the first time in her life, Mary is able to look through a window to her ancestral past.

“Thirty-seven-point-nine percent British and Irish. Scandanavian 17 percent and then Eastern European with Poland, which is amazing because my grandmother is 100 percent Polish but not biological grandmother. She would be so proud! Ten percent French and German. The Balkans, three percent and then Northwestern Europe 14 percent," Mary said.

Mary also wants to know more about her hereditary health. She opted for the in-depth health analysis that covers a wide range of topics like dimples and detached earlobes. There is also fluffier stuff.

“Less likely to be a deep sleeper. That is 100 percent true," Mary said.

Then there are the reports that evoke greater concern. Mary was clear on a long list of genetic variants that can be associated with disease with the exception of one.

However, DNA expert Dr. Skinner would tell her not to worry.

While Skinner does believe in the accuracy of the ancestry testing, he is not a huge fan of the health reports.

"Things like lifestyle and your environment play far more in what's going to happen with your disease than basically that mutation," Skinner said. “Frankly I don't think it's appropriate to have a genetic report without a genetic counselor sitting there telling you what it means."

KREM 2 contacted 23 & Me, who stand behind the value of their health report. They specifically pointed to a variant in one of the conditions they track called "AATD" which is associated with lung disease.

They said, "Our customers have used our tests, like this one, to have conversations with their health care providers that have led to medical interventions."

As for Mary, she may share the report with her doctor, but she will not let it torment her.

"You can't stop life just because you're waiting something to happen. I'll probably get struck by lightning,” she said laughing.

Mary does have one more meaningful choice to make. With the click of a button, the service can connect her with other DNA relatives in their system.

“I have a big family I'm not looking necessarily for more siblings because sometimes you know, I have what I can handle. But I think it would be, it would be nice to know," Mary explained.

While she will let that decision percolate, Mary already knows the next time someone asks her about her ancestry, she will finally be armed with indisputable information about her roots.

DNA testing is still relatively new so some people are concerned about privacy. KREM 2 asked 23 & Me how they could potentially use your DNA sample in the future. They said you can elect to have your sample destroyed after analysis, or have your sample stored in their lab. If you do elect to participate in research, your genetic information can be used for studies but for privacy protection they said the DNA is stripped of personally identifiable information unless the customer agrees otherwise. With 23 & Me research participation is optional, so just make sure you are clear about what you are choosing when you sign up.