A certified nursing assistant says she was fired on November 30 in "retaliation" for advocating for better protections for staff and residents. 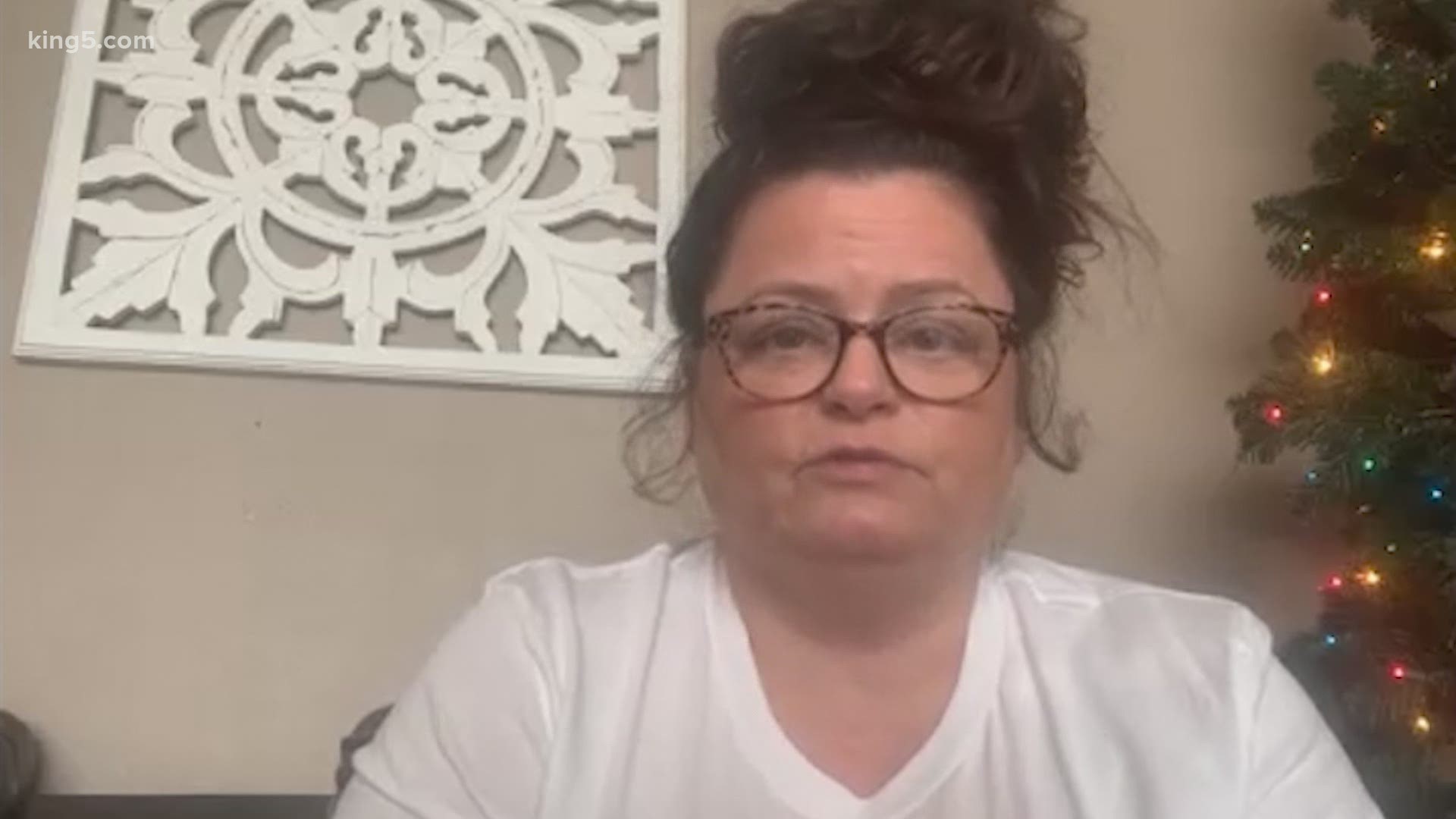 A certified nursing assistant, awarded “Employee of the Month” in October, was fired in late November for what she says is “100 percent retaliation” for complaining about her employer’s initial response to a COVID-19 outbreak.

“They fired me and that’s wrong. I hope that something’s done about it, because it’s not right,” said Jamie Roscoe of Marysville. “I’ve been a dedicated, loyal, excellent employee. And I was fired - why? Because I have a passionate voice about the right and wrong way to do things.”

According to the Snohomish Health District, 26 residents and staff of the Cottages at Marysville, a small memory care center with approximately 48 residents, have tested positive so far for the coronavirus as of Tuesday; although staff members tell KING 5 the numbers are increasing. The health district said fewer than five people associated with the facility have been hospitalized.

Roscoe, the fired employee, tested positive for COVID on Nov. 24, five days after a fellow nursing assistant, who she worked closely with every day, tested positive. But Roscoe said no one in management alerted her.

Roscoe said they handed out face shields and gloves, but the rest of the initial response was sloppy and not enough to keep the fragile residents safe: no quarantining to their rooms, no guidelines on protocols, no meaningful communication.

Joe Kilkelly, the CEO of the facility’s parent company, CarePartners Senior Living, based in Mercer Island, said Roscoe is disgruntled and lying.

“Our Business Office Manager… personally told Jamie and others at (a) shift change… that we were going to full PPE protocol because we had a positive employee test result. It is therefore a complete lie that Jamie was not informed,” Kilkelly said. “There is no scandal here.”

Twelve current and former Cottages at Marysville employees told KING 5 they too found communication lacking. In detailed interviews, they echoed the same concerns as Roscoe. All but two asked to remain anonymous due to fear of reprisals.

“I never got a call that I was exposed to a co-worker who was infected. It makes me not want to go to work, but I have to. I’m a single mother,” said one worker who tested positive for COVID.

“The residents don’t deserve this. If we’re not getting the proper tools, meaning information, then no one is doing their job properly,” said another worker who is positive for the virus.

Another nursing assistant positive for COVID said, “Very poor communication. You shouldn’t have to ask or guess what’s going on.”

One worker, who fills in when needed, said she “quit on the spot” when a manager called her in to work without disclosing the positive case.

“I felt super blindsided because I thought we had better communication about possible cases and they didn’t let anybody know. They should have called everyone individually or try to have a staff meeting,” the former employee said.

When Roscoe, a two-time cancer survivor, heard about the first infected staff member she fired off stinging texts to a manager, which she shared with KING 5.

“I’m mad,” she wrote. “Something like this is actually a big deal!! Why did no one say anything?....I’m really feeling upset with all of you in management!...I could actually die (because of my underlying conditions)…How could you guys know that kind of information and not saying!!”

Roscoe, 43, also told co-workers she wanted to call some of the residents’ family members to alert them she was positive and had cared for their loved one.

After that, she said her boss, Cottages at Marysville Executive Director Jeff Roberts, called her at home while she said she was struggling mightily with COVID-19.

“He said, ‘Well I have a Christmas surprise for you….Since you disagree with our handling of COVID and you think we’re hiding things….I’m calling to terminate you.’”

Afterward, a text message exchange shows Roscoe asked her boss for termination papers. He responded that there would be no papers, but she should turn in her keys and work radio, or find a financial deduction from her final paycheck. Roberts finished the text with “See ya then!!” He concluded the exchange with a smiley face emoji.

“I was furious, and I was sad. I felt like he was taunting me and being cruel,” Roscoe said. “I was so sick I thought I was going to die (from COVID)….He just giggled and laughed and hung up on me.”

CEO Kilkelly said their facility “took full precautions” and “we fully disclosed to all” the positive COVID case.

“Our regulator (DSHS) reconfirmed that we have followed all the appropriate notifications and infection control steps and that our community has been a shining example of how to do things quickly and correctly,” Kilkelly said. “We have nothing to hide here.”

Kilkelly said Roscoe was fired for spreading lies on Facebook about their outbreak.

In the comments below the post, Roscoe complained about the facility, without mentioning it by name.

“They didn’t tell us…later we all found out (our co-worker) was positive - pretty messed up they should have had everyone tested including the residents..And definitely should have deep cleaned (the area of infection)!”

Kilkelly said Roscoe “was fired for violation of personnel policies having to do with codes of conduct.”

Katey Hardesty of Marysville, a current employee, said management left her in the dark about the outbreak.

“No email, no meetings, nothing. They didn’t say anything,” Hardesty said.

Hardesty said the facility’s head nurse pressured her to come to work while awaiting her COVID test results.

“They said if I want to self-isolate myself, then that’s up to me, but it’s not a guarantee that my job will be there when I get back,” Hardesty said. “It made me really upset because it made me feel like I had to go in in order for me to not lose my job.”

“I feel like if my management would have notified us of the first positive case, this wouldn’t have happened. It wouldn’t have gotten this far,” Hardesty said.

Kilkelly, the CEO of the parent company that, according to its website, owns 16 long term care facilities in western Washington, said the employees who spoke to KING 5 are “looking for their 15 minutes of fame” and are “attention seekers.”

“I truly believe (KING 5 is) being misled here by a disgruntled employee who was terminated because of her own indiscretions and poor judgment,” Kilkelly said. “We haven’t attempted to hide anything from our staff or the resident families as is demonstrated by our disclosures and timely actions.”

Roscoe said losing a job is one thing, but her thoughts are with the fragile residents she misses serving.

“We are in a position where we are taking care of the most vulnerable of people, the elderly. And to have something like this happen is wrong,” Roscoe said. “Me being an advocate for the elderly and loving them and caring about them is the exact same reason I was terminated. And it should be the exact same reason they would keep me on board, because I’m passionate, because I care about them.”

More from the KING 5 Investigators