The footage obtained by KREM shows police asking fraternity members in the aftermath of Martinez's death if younger members were forced to drink. 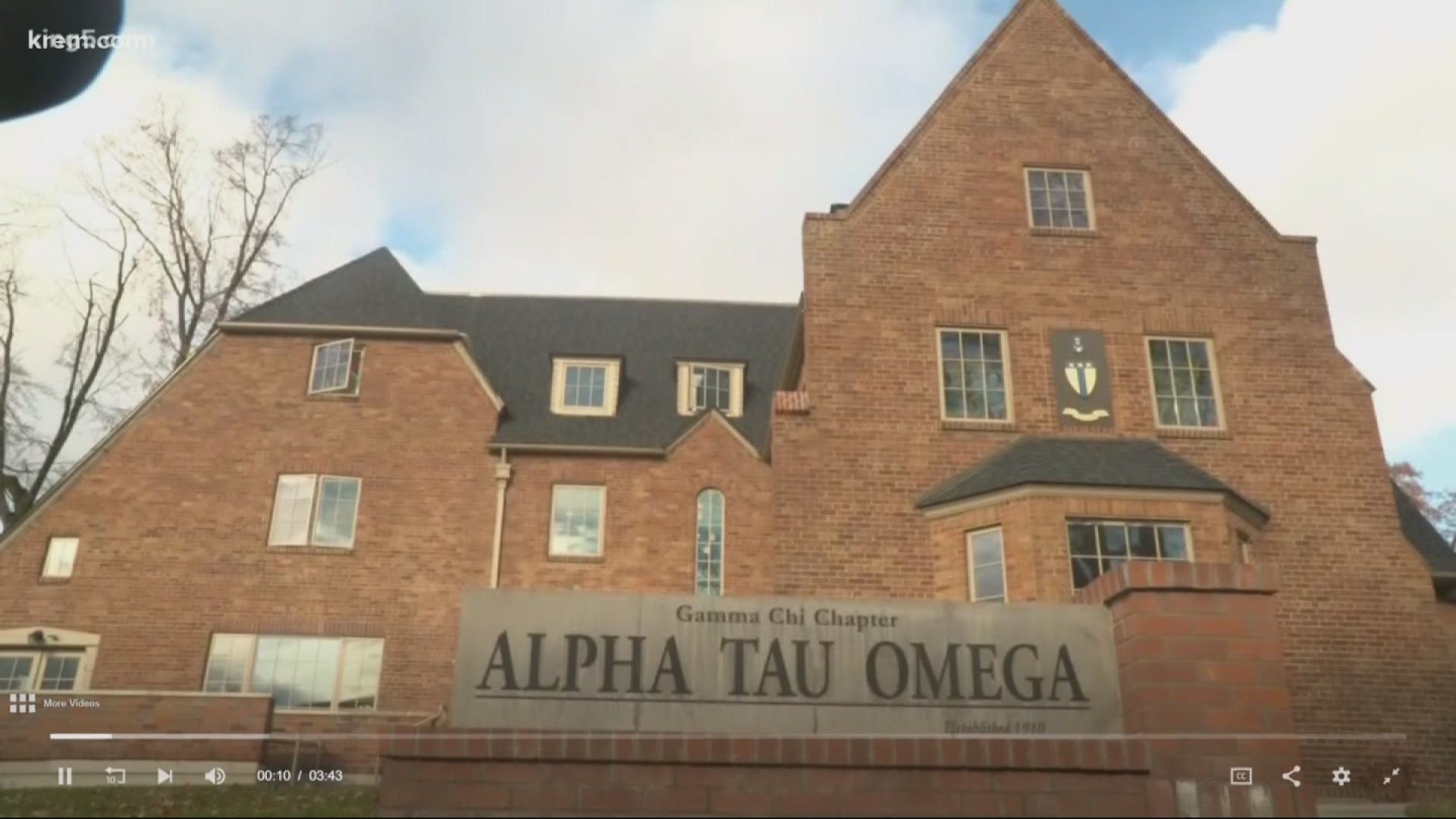 One person police talked to the morning that Martinez was found dead was Luke Hawksford, who was the president of the fraternity chapter. Hawksford told police that he briefly saw Martinez the night he died at the fraternity's "Big-Little" reveal event, when freshmen members are given big brothers from the sophomore class in the chapter.

Hawksford told police, according to the footage, that Martinez was being carried down to a couch to be laid down because he was heavily intoxicated.

"Prior to 11:24 p.m., when you saw Wesley (Oswald, another fraternity member charged in Martinez's death) ... Wes, a couple freshmen like five freshmen, were headed down the stairs to take Sam to the chapter room?" Pullman Police Officer Greg Umbright asked Hawksford.

"Yes, I assume they were going to the chapter room because that's where people take people when they've had too much to drink," Hawksford answered.

Hawksford is one of the 15 fraternity members charged with Furnishing Liquor to a Minor, a gross misdemeanor in Washington. The Whitman County Coroner determined that Martinez died of alcohol poisoning, and had a blood alcohol level of .372 when he died.

Pullman police had been told by some people they interviewed that it was believed older members of the fraternity had hazed Martinez and his freshmen peers that night by pushing the freshmen to get as drunk as they could. But another fraternity member facing a misdemeanor charge, Finn Anderson, told police during a phone interview that it was a choice for the younger members.

"Like they, if they want to do it," Anderson said, "Like, you know, you know its big little night, so you're like, 'Yes.' We have alcohol, we're just going to hang out and drink all night and stuff like that. So, that's kind of, that's kind of the idea of it I guess."

Accusations of hazing at ATO that night and in general are part of what led PPD to recommend hazing charges in the case, but the statute of limitations under Washington's hazing laws had expired.

Hawksford told police the fraternity had tried to crack down on any possible hazing.

"I mean we've been really trying to crack, ever since I've been president, trying to crack down on hazing because my freshman year, we went through a membership review, which you might know about," Hawksford said. "Part, I don't know all of the reasons for it, but, you know, part of that was for hazing. I mean, I got hazed. So we know what happens when you do that."

Washington State University suspended its chapter of Alpha Tau Omega in the days following Martinez's death. Currently, the chapter is suspended until May 2026 by both the university and its national organization.

In a letter informing the chapter of the suspension, the university said that if the allegations of what happened were true, it would be a violation of hazing rules and a number of other university standards.

But when the Pullman Police Department tried to build its case for hazing charges, they came up short. Police said witnesses and friends of Martinez were often uncooperative, and wouldn't share information needed to pursue the more serious felony charges.

One of those roadblocks is apparent in the body camera recording of a phone interview done by Pullman Police Detective Heidi Lambley with one of Martinez's high school friends, who's name KREM isn't releasing as they aren't charged or being investigated for a crime.

"It was 'Big and Little Reveal Night', and all the pledges (new members) were hazed to drink a fifth of vodka each. I heard that he was just left alone for long periods of time," the friend told Lambley.

"And you aren't willing to tell me who you heard that from?" Lambley asked in return.

"I would go talk to that person," Lambley answered.

"Yeah, I don't really feel comfortable naming any names. I just wanted to, I don't know. I just saw on the news, and you said, if I hear anything to call Pullman police, and that's what I know," the friend said.

"OK. Well, and I appreciate you calling me, but I'm going to let you know, I can't do anything with the information that you provided me," Lambley said.

The first appearances for all 15 suspects charged in relation to Martinez's death is set for June 30 at 1 p.m. in the Whitman County Courthouse. All 15 are facing one or two counts of Furnishing Liquor to a Minor, a gross misdemeanor in Washington and punishable by a year in jail, a $5,000 fine, or both.