A Spokane veteran was evicted for no reason, and it's legal

More people on month-to-month leases are finding themselves with as little as 20 days to find a new home and those new homes are proving hard to find. 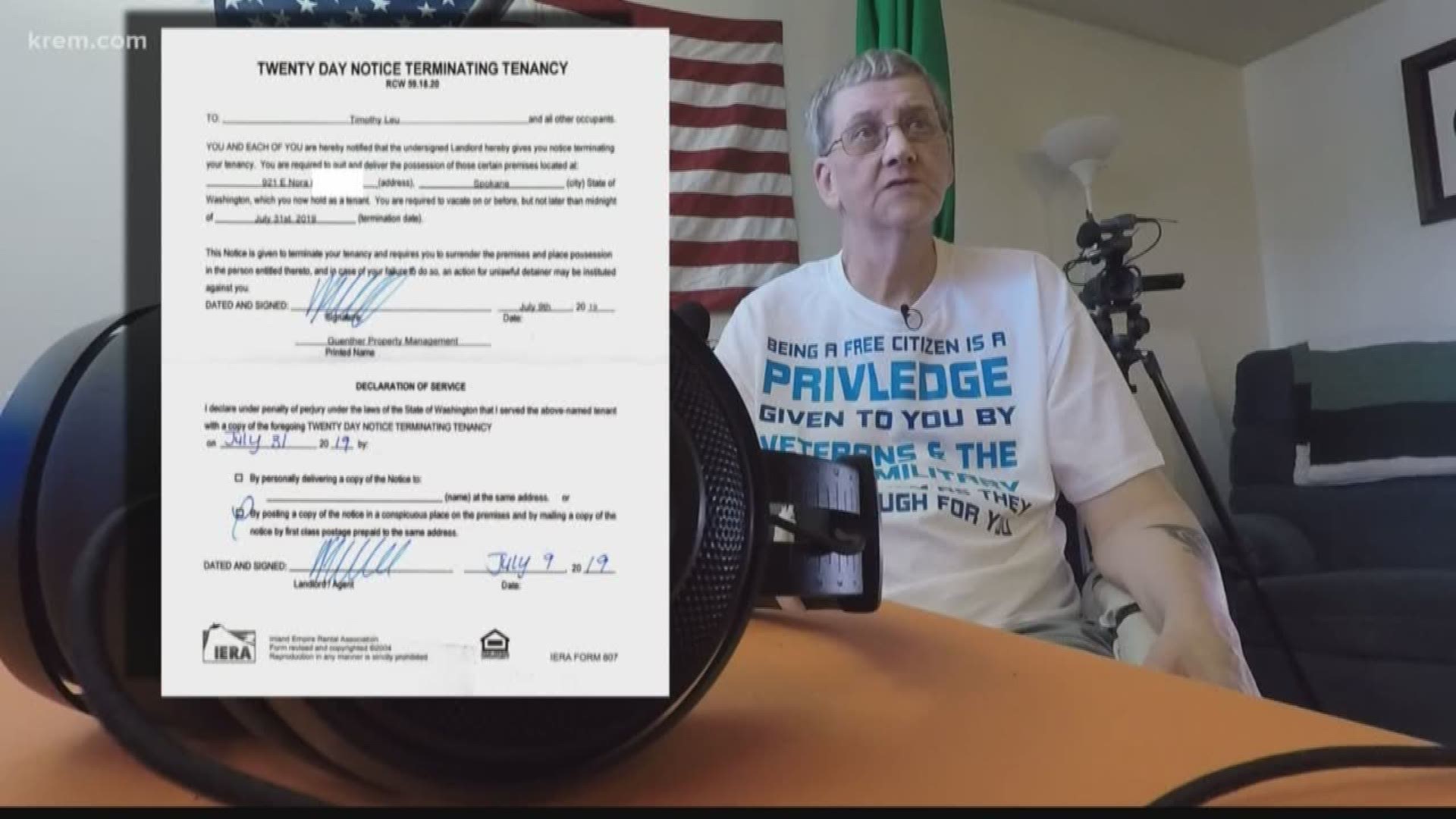 And some of the people who rent apartments month-to-month are finding themselves evicted with no reason, as landlords look to raise rents or get new tenants. Many have as little as 20 days to find a new home in an increasingly expensive rental market.

In Washington state, these no-cause evictions are perfectly legal.

"Last year I was diagnosed with Idiopathic Sensory Motor Exonal Polyneuropathy," said Spokane renter and veteran Tim Leu. "It affects my sensory skills and my motor skills. I fall on average three times a day."

He knows his disease will soon force him from crutches to a wheelchair.

"The laundry room's downstairs, garbage is downstairs,” he said about his current apartment.

Leu's doctor at the VA wrote an order showing Leu now needs a ground-floor apartment. Leu also inquired with the apartment owner about installing a wheelchair lift so he wouldn't have to move from his second-floor unit.

"Same day that they replied the denial they also posted a 20-day termination on my door," he said. "What's going on? I didn't understand what I did. By law they don't have to give a reason. I was on a month-to-month lease."

Jose Trejo is an Attorney with the Northwest Justice Project. He is not handling a case for Leu, but he helps low-income tenants with free legal advice in civil housing matters. He says this happens to people on a regular basis.

In Spokane, what's called "no-cause eviction" is perfectly legal. If you're on a month-to-month lease, you could be out with as little as 20-days notice and the landlord doesn't have to say why.

A tenant can challenge in court if they believe the eviction was in retaliation and ask for reasonable repairs or accommodations, but the tenant carries the burden of proof. This is unlike places like Seattle that have "just cause evictions," where the landlord must provide a reason for eviction.

"Seattle has just-cause so there are lots of reasons a landlord can terminate a tenancy there, including any violations of the lease that are significant, but it can't just be for no reason whatsoever. In Spokane, none of those protections are there," Trejo said.

Leu wonders if his inquiry about a wheelchair lift prompted his tenancy to be terminated. KREM didn't hear back from the landlord when asked why but KREM was told another tenant was given a 20-day notice on the same day.

Even if Leu’s current apartment building was appropriate for a lift, he would legally be required to pay for it.

"A lot of people are under the mistaken impression that the landlord has to pay," Trejo said.

"Because there are so many issues with evictions and as we're moving forward in a very tight rental market, there are more potential abuses as landlords want to move forward with evicting people perhaps because they know there are other tenants available that may pay larger rents," Trejo said.

RELATED: It costs twice the minimum wage to rent a 2-bedroom house in WA, ID

RELATED: 'People are up in arms': Rent hike worries seniors at Vintage Apartments in Spokane

Northwest Fair Housing Alliance wrote to Leu’s property managers, noting that he's disabled and under the federal Fair Housing Act he should be granted an extra 30 days to move.

He was granted that extra time, but the clock is ticking. In Spokane's tight rental market, it's tougher to find a new place to land. He's still hoping he can find a ground-floor apartment within his budget.

"I'd like to think that I could sign a five-year lease," Leu said. "The less moving I have to do the better because this condition is only going to get worse."

With the vacancy rate so low, it's really tough for people to find a new place quickly. Some viewers tell KREM they've been looking for months.

Members of the Spokane City Council have started conversations with landlords and tenants to explore potential changes in housing policy. Those conversations include no-cause evictions.

RELATED: The most and least expensive states for retirement