7 Investigates found embattled former Idaho Sen. Larry Craig was spending donations from his lucrative campaign account as recently as 2016, long after he was a sitting senator. 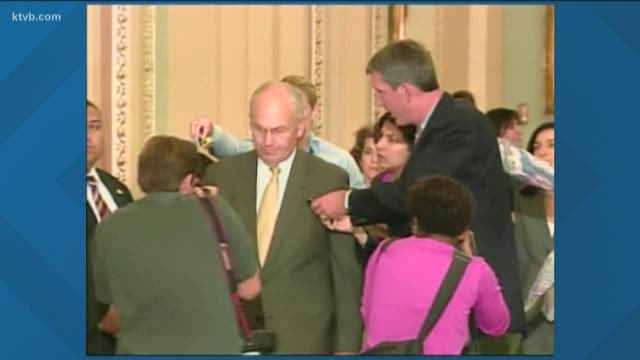 BOISE -- None can forget former Sen. Larry Craig's infamous sex scandal in a men's bathroom at the Minneapolis-St. Paul International Airport more than a decade ago.

So what was the former senator spending campaign donations on, and why? 7 Investigates found the embattled former senator was spending donations from his lucrative campaign account as recently as 2016, long after he was a sitting senator.

An undercover police officer involved in a sex sting operation said Craig touched his leg under the bathroom stall with his foot at the Minneapolis Airport, which supposedly meant he was soliciting sex. Craig claimed he had a "wide stance" and it was all a misunderstanding. He maintains that he did nothing wrong in that airport bathroom. The former Republican senator was charged and pleaded guilty to disorderly conduct in August 2007 but tried to overturn the plea once the case went viral. Craig initially announced he would resign, but then rescinded that statement and didn't run for re-election the next year. He retired from the Senate in January 2009.

A few years later, in 2012, he was sued by the FEC for misusing campaign donations while still in office for legal fees relating to the bathroom scandal. He was eventually fined $45,000 for violating election laws and ordered to return about $198,000 to the U.S. Treasury. 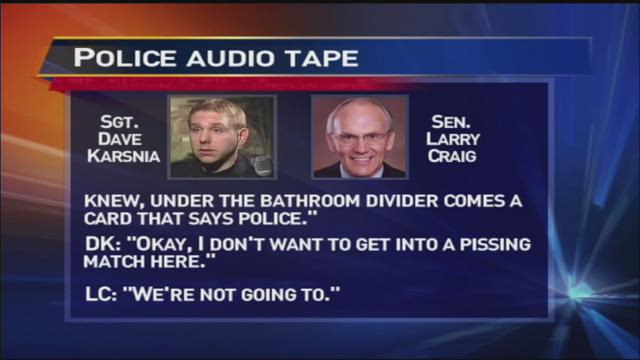 But Craig's time in D.C. didn't end when he retired from the Senate. He started a lobbying/consulting firm, New West Strategies, based out of Idaho. And spending from his campaign account continued well past his retirement. Despite his trouble with the FEC, 7 Investigates discovered Craig’s account was left open and dipped into as recently as recently as 2016. Online FEC disbursement reports show the bulk of his questionable spending happened within the two years after he left office. The former senator provided very little details of where his money went.

FEC reports show Craig racked up nearly $1,000 in "meeting" expenses with organizations like the NRA and GOP parties in Idaho during that time. He also paid for a cell phone for nearly eight months after he left office using campaign donations, with bills amounting to about $2,000. Plus, nearly $1,000 in office supplies, computer expenses, and other miscellaneous items came at the expense of campaign donations.

Yet the most alarming payments were Craig’s multiple reimbursements to himself totaling about $4,400 for what’s listed as "travel" and vague "non-travel" reasons. Under the same vague descriptions, Craig reimbursed his wife, Suzanne, a few times totaling almost $1,000.

"It's hard to imagine how somebody who has been out of Congress for a long time spending campaign funds on technology or phones or anything along those lines is doing so to further their activities as candidate or office-holder," a former attorney for the FEC who is now a senior director at the Campaign Legal Center, Adav Noti, told our TEGNA sister station WTSP.

When we questioned Craig about it the expenditures, he told KTVB it was too long ago to remember specifics but that those were legitimate expenses, approved by the FEC.

From 2011 and beyond, FEC disbursement reports show Craig kept dipping into the fund years after he stopped campaigning, all the while lobbying - which campaign finance watchdog groups say is a big no-no.

"There's just no legitimate explanation for that and it's just outrageous. It's the kind of abuse that people only perpetrate when they're sure nobody is watching and they can get away with anything," executive director of D.C. watchdog group Citizens for Responsibility and Ethics in Washington (CREW), Noah Bookbinder, told KTVB, "After a few years it's hard to imagine a scenario where it's justified. It looks outrageous. And the law does not allow former candidates to use that money for their own personal purposes and the FEC is not doing anything about that. So that is an FEC problem."

We discovered Craig spent more than $5,200 of his campaign funds on what's listed as office supplies, computer software, and political contributions between February 2011 and 2016.

"It's not legal to use leftover campaign money in your new job, whether that's as a lobbyist or anything else," Noti said.

With all his expenses added together after leaving office, we calculated that Craig used around $15,000 from his campaign account.

7 Investigates reached out to Craig multiple times to try to get him to talk to us on camera or give a formal statement, but he chose not to. He told 7 Investigates, "I kept my account open because of my fight with the FEC and dispute over the settlement." It is worth noting Craig’s campaign account is closed now.

Under the law, donations should be used for campaigning and the cost of being in office. FEC rules suggest former lawmakers shouldn't need more than six months to close down their account and pay off those costs. Retired lawmakers can then refund leftover money to donors and give it away to charity or other established political committees. But they can’t dip into campaign donations for personal use.

“There are personal use prohibitions,” FEC spokesman Christian Hilland said in an interview with WTSP. “Outside of that, if there are still costs associated with a campaign, utilities or a lease on a building – that can still be paid.”

"Campaign money is for a particular use, which is running for office or being in office. It's not to use indefinitely to subsidize other activities," Noti said.

"When people give money to a campaign they are supporting that candidate, they want to help that candidate get elected. But they're not giving the money to that person to do as they see fit for the rest of their lives," Bookbinder added.

Larry Craig is just one example of former office-holders taking advantage of the Federal Election Commission loophole that allows them to keep spending campaign cash after their public service is over. Former lawmakers and candidates are not required to retire their campaigns even after they retire. Our nationwide investigation uncovered scores of lawmakers have these “zombie campaigns," and scores of them are turning their campaign treasure chests into personal slush funds to help pay for their lifestyle.

Several campaign finance experts and watchdog groups say their abuse of the oversight should be raising red flags, and much of the spending going on should have caught the attention of the FEC and been marked as potential election law violations.