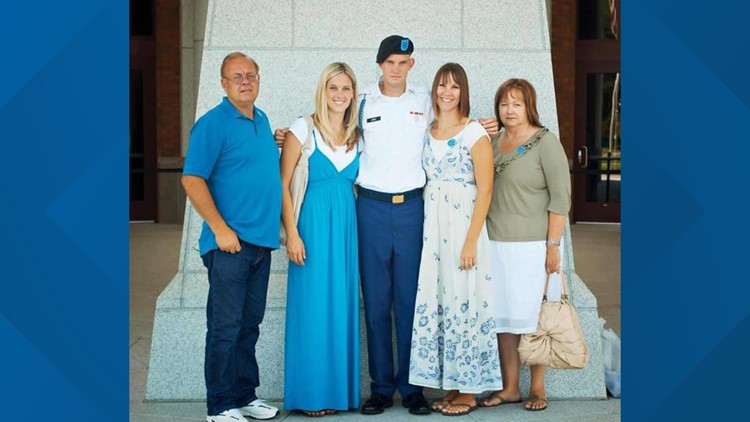 Photo by: KIFI
Dustin Ard is pictured here with his family.

US service member from Idaho killed in Afghanistan

WASHINGTON — A U.S. service member from eastern Idaho has been killed in Afghanistan.

The brief statement from the NATO Resolute Support mission said the latest death occurred Thursday but provided no further details.

"We received news that we lost our son Dustin in Afganistan," said Bruce Ard in a Facebook post. "My heart has a hole so big I can hardly stand it. He was the finest young man I have ever known. Not because he was my son but because if the person he is. A great son, brother, father, and husband. He loved his country and was the kind of person we should all be. Son, I Love you and know we will see each other again. I will miss you every day I live without you. Love Dad."

Bruce told KIFI TV that Dustin served a mission for the Church of Jesus Christ of Latter-day Saints and then went to college but still felt like he wanted something more challenging, and that's when he decided to train to be a Green Beret.

He is survived by his wife, 3-year-old daughter and son on the way.

The announcement came as negotiations between a U.S. envoy and the Taliban appear to be close to an agreement on ending America's longest war.

More than 2,400 U.S. service members have died in Afghanistan since the U.S.-led invasion in late 2001 to topple the Taliban, whose government had harbored al-Qaida leader Osama bin Laden. Al-Qaida insurgents used Afghanistan as a base from which to plan the Sept. 11, 2001, attack on the United States.

The U.S. combat mission in Afghanistan formally ended in 2014, but air and other support continue for Afghan forces fighting the Taliban and an affiliate of the Islamic State group. Both extremist groups continue to carry out deadly attacks against civilians and military forces.

President Donald Trump has called it "ridiculous" that U.S. troops have been in Afghanistan for almost 18 years, but earlier this month he acknowledged that the country remains dangerous and "we have to have a presence" there.

The Taliban, who now control or hold sway over roughly half of the country and are at their strongest since their 2001 defeat, have demanded that all foreign forces leave.

Trump on Thursday said the U.S. plans to withdraw more than 5,000 American troops from Afghanistan — bringing the level to 8,600 — and then will determine further drawdowns, but he offered no timetable.

The U.S. was "getting close" to making a deal with the Taliban, he told Fox News Radio's "The Brian Kilmeade Show," but added: "Who knows if it's going to happen."

A Taliban spokesman also has said a final agreement is near.