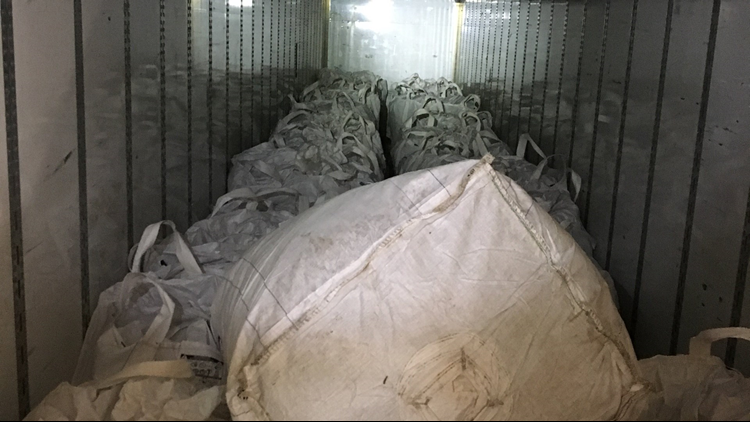 BOISE, Idaho — More than $1 million worth of hemp seized in a January traffic stop remains in police custody.

A lawsuit against the Idaho State Police over the seizure continues to move through state and federal courts. The 9th Circuit Court of Appeals on Tuesday ruled it could not, at least for now, weigh in on the hotly debated questions about hemp, citing case law declaring it should allow a state court to decide the issues.

During a Jan. 24 traffic stop, Idaho State Police seized more than 6,700 pounds of hemp from a semitrailer in Ada County. The product's owners, Colorado-based Big Sky Scientific, has since sued the agency, asking for the return of the $1.3 million truckload of cargo. The Idaho State Police has refused, and the product remains in its custody, listed as evidence in an adjacent criminal case against the driver, who has an upcoming court date this month.

The problem is, under current Idaho law, hemp isn't distinct from marijuana. Hemp is a cannabinoid, as marijuana is. Both plants contain tetrahydrocannabinol, the psychoactive ingredient in marijuana, but industrial hemp, by law, contains no more than 0.3% of the chemical. Unlike marijuana, hemp does not produce a high, but it does have a plethora of industrial uses, and can be found in everything from rope to lotion to beer. Under the 2018 Farm Bill, hemp is legal at the federal level even though it contains THC.

Idaho is one of few states where hemp containing THC is still illegal in any form. An effort to change that in this year's legislative session was met with fierce opposition from police and prosecutors and was ultimately unsuccessful.

It’s why in January, when Oregon trucker Denis Palamarchuk, 38, stopped at a port of entry in Ada County carrying Big Sky Scientific’s shipment of hemp on his way to Colorado, Idaho State Police seized the hemp and arrested him on suspicion of trafficking in marijuana. At the time police touted it as the biggest marijuana bust in state history, although the substance was later tested and shown to be hemp by federal standards.

Palamarchuk has a criminal case still pending, with a court date set for Sept. 17, and — thanks to another nuance of Idaho’s criminal laws — faces a mandatory minimum of five years in the custody of the Idaho Department of Correction if convicted of that charge. He pleaded not guilty to the charge in April and has an upcoming jury trial.

The Idaho State Police seized the hemp, the truck, and the trailer through a process known as civil asset forfeiture, whereby police can seize property used in the commission of a crime and sell the property for money. Big Sky Scientific and IYI Trucking, which owns the truck and trailer, sued the Idaho State Police for their property.

While Idaho State Police agreed in June to return the truck and trailer to the IYI Trucking, it has not returned the hemp or allowed Big Sky to test it to find out if it’s still worth as much as it once was, said Elijah Watkins, the attorney representing the company. He said the company has asked to test it multiple times.

“They’ve taken the hemp and not let us look at it or inspect it,” Watkins said.

In court documents, Watkins questioned why the Idaho State Police would still need to hold all 6,701 pounds of hemp when it had obtained the samples needed to prove it contained THC.

Tim Marsano, a spokesman for the Idaho State Police, said he could not comment on the case because it's still pending. But in general, he said, evidence in criminal cases is tightly controlled.

“Evidence being held in an ongoing criminal investigation is not subject for ... inspection by the public, generally,” Marsano said.

'IDAHO'S LEGISLATURE HAS FALLEN BEHIND'

On Aug. 28 in Seattle, Watkins made his arguments before the 9th Circuit Court, imploring them to order Idaho to release the hemp. By then, more than 600 pages of legal briefs and more than 1,000 pages of evidence had been filed in the case. Based on the written arguments he’d made in the volumes of court documents, he believed the judges had a chance to establish some precedent for how the interstate transport of industrial hemp is regulated through Idaho.

The question, as he saw it, was whether police could legally seize hemp transported across the state for purposes of interstate commerce. He noted the Montana State Department of Agriculture had filed a friend-of-the-court brief in support of Big Sky Scientific’s case. Hemp is legal in Montana.

“As a first-in-the-nation statutory and constitutional issue, the decision from the 9th Circuit Court will provide much-needed guidance not only for Big Sky, but for the entire industry, state legislatures, and law enforcement,” Watkins wrote in a March 15 court document.

Elsewhere in that document, he wrote, “Idaho’s legislature has fallen behind” in deciding how to regulate hemp, and argued “this case presents unique issues of interstate commerce relating to a commodity for which federal law is recently evolving, and Idaho law currently fails to address.”

He wasn’t the only one who noted the lack of direction on the issue from the Idaho Legislature. In June, prosecutors in Ada County asked to push back the sentencing for two other truckers — Andrew D’Addario and Erich Eisenhart — who faced criminal charges after they were found to be transporting industrial hemp through Idaho in April 2018. They ultimately pleaded guilty to felony possession of a controlled substance with intent to deliver, but prosecutors appeared concerned about the precedent the case would set and so asked for more time to craft a recommended sentence in the case.

The state of Idaho, they wrote, “does not have legislation setting forth a regulatory system that would provide legal framework to allow the interstate transport of hemp.”

Because of that, they have “been diligently researching and working to develop a solution to avoid the recurrence of the issue facing law enforcement, prosecutors and those seeking to transport hemp in Idaho.”

The sentencing has since been pushed back to Sept. 17 — coincidentally, the same day as Palamarchuk’s next scheduled court appearance. Fourth District Court Judge Jason Medema is presiding over both cases.

WHY THE 9th CIRCUIT COURT DID NOT DECIDE

The 9th Circuit Court judges didn’t dispute the fact that the case was important — and in fact, for that very reason, they felt they had to let a state court in Idaho decide whether the hemp should be returned to Big Sky Scientific and, thus, establish precedent in the current legislative vacuum.

Their reasoning has to do with the history of the case.

On Feb. 1, about a week after Palamarchuk’s arrest, and the Idaho State Police’s seizure of the hemp and the truck, Big Sky Scientific sued the state of Idaho in federal district court, asking a judge order the hemp be returned.

A week after that, on Feb. 6, the Idaho State Police filed paperwork in Idaho’s 4th District Court to take legal custody of the truck, the trailer and the hemp through civil asset forfeiture. Big Sky Scientific fought the effort in that case as well.

Thus, there were two open cases hinging on the same question — whether the Idaho State Police should return the hemp. One case was in federal court, the other in state court.

When U.S. District Court Judge Ronald Bush ruled in February Idaho did not have to return the hemp, Big Sky Scientific appealed the case to the 9th Circuit Court of Appeals.

And on Tuesday, judges there said the matter should be decided in the district court. They cited a 1971 U.S. Supreme Court decision, Younger v. Harris, as their guiding light.

According to that decision, federal courts should defer to state courts if there are two cases involving the same matter and if the “proceeding implicates important state interests.”

The Big Sky Scientific case met those criteria, according to the court.

“The panel will retain jurisdiction over further proceedings in this matter,” the judges wrote in their decision.

The 4th District Court case had been stayed as attorneys waited for the 9th Circuit Court of Appeals to make its decision. On Thursday, attorneys filed paperwork to push proceedings back into motion.

How the case will move forward is unclear. In the criminal case, Palamarchuk is still charged with trafficking in marijuana and still facing a mandatory five years in prison if he’s convicted of the charge. State attorneys in their motions voiced concern for his Fifth Amendment rights — the protection against being forced to incriminate oneself — if he were called to testify in the Big Sky Scientific civil case. His court appearance on Sept. 17 is a pre-trial conference. His trial is scheduled to begin Oct. 2.

Tommy Simmons is the Ada County public safety reporter for the Idaho Press. Follow him on Twitter @tsimmonsipt

This article originally appeared in the Idaho Press, read more on IdahoPress.com.