As health officials identified a new case from a measles outbreak in Washington state, lawmakers continue to weigh two measures that would remove parents' ability to claim a personal or philosophical exemption to vaccinating their school-age children. 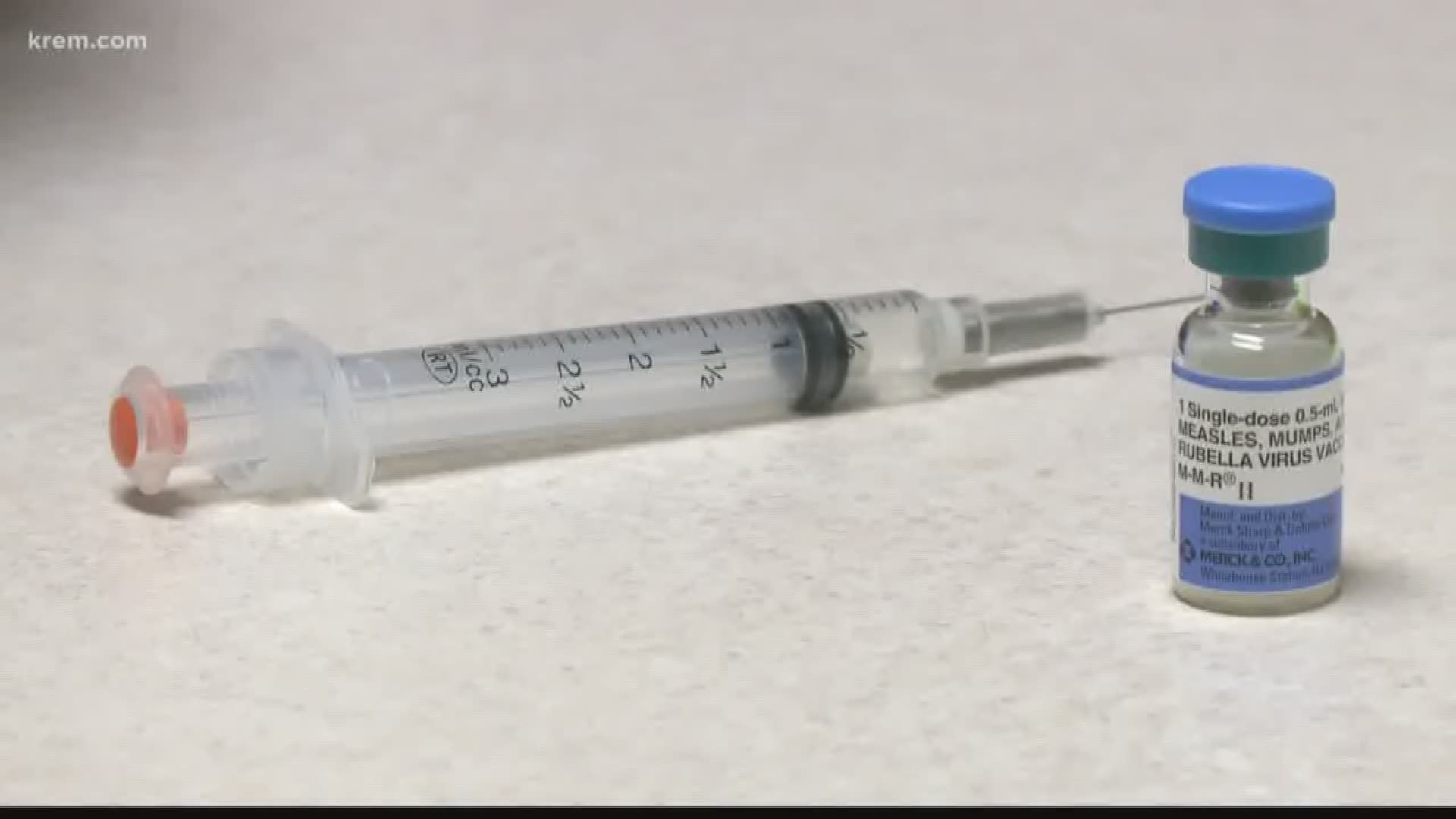 OLYMPIA, Wash. — As health officials identified a new case from a measles outbreak in Washington state, lawmakers continue to weigh two measures that would remove parents' ability to claim a personal or philosophical exemption to vaccinating their school-age children.

A House committee last week advanced a measure that would remove the philosophical exemption option for the combined measles, mumps and rubella vaccine. The Senate Health and Long Term Care Committee held a public hearing Wednesday on a broader bill which would not allow personal or philosophical exemptions to be granted for any required school vaccinations, and it is expected to take a vote on the measure Friday.

The two bills come amid an outbreak that has sickened at least 64 people in the state — all but one in Clark County — leading Washington Gov. Jay Inslee to declare a state of emergency.

John Wiesman, the secretary of the state Department of Health, said in a news conference before Wednesday's hearing that the legislative efforts are "about keeping our kids safe from unnecessary diseases."

"The current measles outbreak in Clark County has highlighted just how dangerous the situation can be and how quickly an infectious disease like measles can just take off," he said.

Washington and Oregon are among 17 states that allow some type of non-medical vaccine exemption for "personal, moral or other beliefs," according to the National Conference of State Legislatures.

Health officials said that 6.7 percent of kindergartners had a non-medical exemption for the 2017-18 school year.

Washington currently allows vaccination exemptions for children at public or private schools or licensed day-care centers based on medical, religious and personal or philosophical beliefs. Unless an exemption is claimed, a child is required to be vaccinated against or show proof of acquired immunity for nearly a dozen diseases — including polio, whooping cough and mumps — before they can attend school or a child care center.

Of the 63 cases confirmed in Clark County, 55 were not immunized against measles, immunization status couldn't be verified for six cases, and two cases involved a child who had received only a single dose of the MMR vaccine.

Forty five of the confirmed Clark County cases involve children between the ages of 1 and 10.

The Portland metropolitan area has seen four cases related to the outbreak in southwestern Washington. Wednesday was so-called "exclusion day" in Oregon — the last day children can attend school without their required immunizations. Parents who are opting out of vaccines must provide paperwork showing a medical or personal belief exemption by this date.

State Rep. Mitch Greenlick, D-Portland, said earlier this month that he plans to sponsor a bill to amend state law to eliminate religious and philosophical vaccine exemptions for Oregon children.

Jill Collier, a registered nurse, told lawmakers at Wednesday's hearing that she didn't consider herself anti-vaccine but was opposed to the bill because the doctor-patient relationship would be harmed by legislative requirements on medical procedures like vaccines.

"We cannot blanket mandate an injection for a child and hold their education hostage for noncompliance," she said.

California removed personal belief vaccine exemptions for children in both public and private schools in 2015 after a measles outbreak at Disneyland sickened 147 people and spread across the U.S. and into Canada. Vermont also abandoned its personal exemption in 2015.