Spokane Quaranteam is distributing more than 30,000 water bottles to those in need. 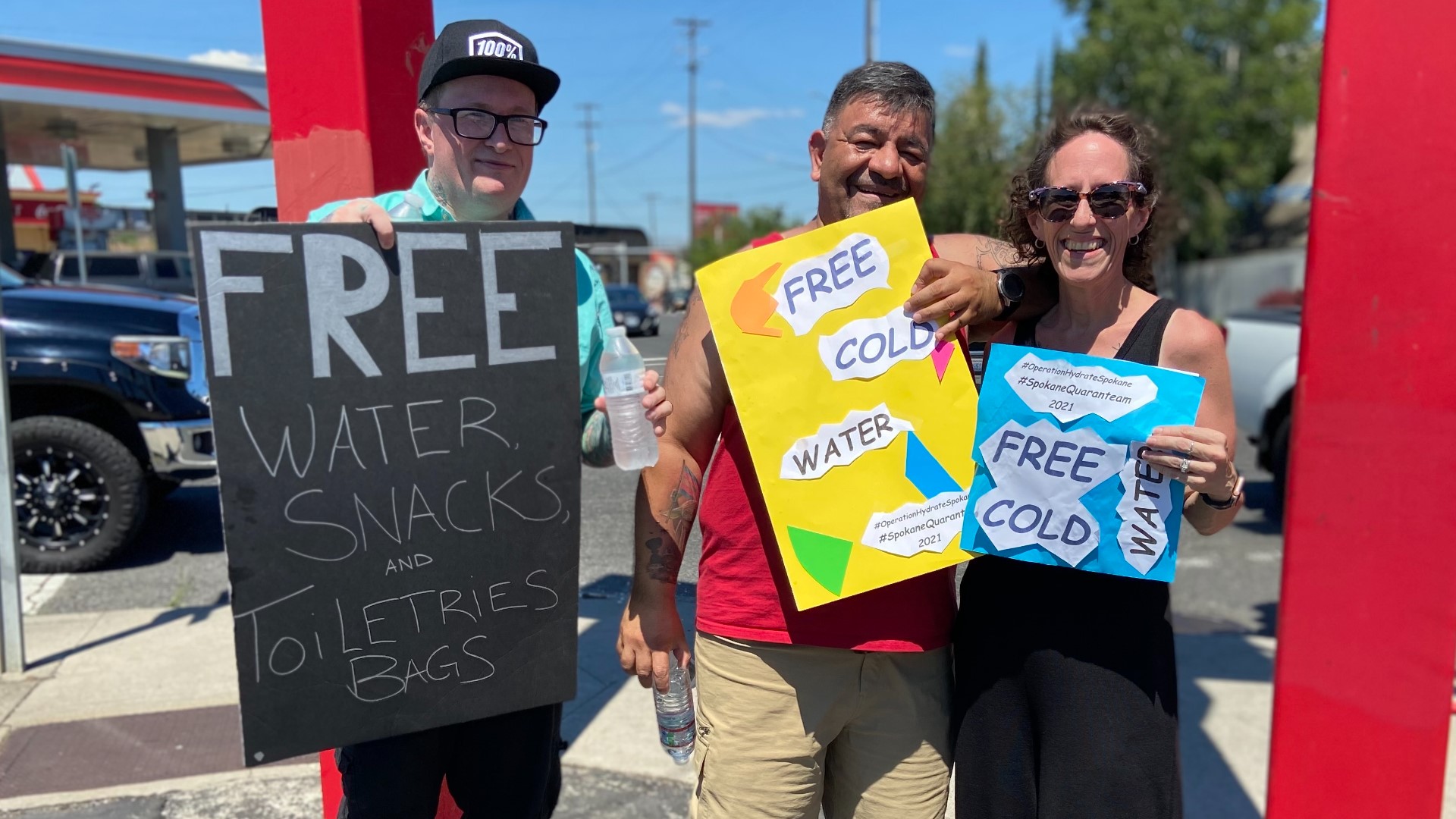 SPOKANE, Wash. — On one of the hottest days of the year, community members waved signs on the streets of Spokane. The Spokane Quaranteam has made it their mission to distribute thousands of water bottles to those in need over the duration of the heat wave.

Some people celebrate their anniversary by going to dinner or taking a trip, but this couple is yelling at cars in downtown Spokane.

More than 30,000 water bottles will reach the hands of people in need. Miyamoto and her husband Jason said they just can't sit in their air conditioned home when some people don't have the necessities to survive this week-long triple-digit heat wave.

"Giving out these waters on this hot day just means that we're gonna be one less person that is going to have to go to the hospital for dehydration," she added. "This isn't something that somebody is doing to make money or anything. It's just a bunch of different people getting together and spending their time and energy, and it's just organized by one gentleman who is just amazing to our community."

That gentleman is Rick Clark. He started the Facebook group "Spokane Quaranteam" in 2020 to help out businesses in need, but the group exploded. Now, 31,000 people come together to raise money, donate food and organize events for those impacted by the pandemic.

"Rick Clark does such a great job," Mayor of Spokane Nadine Woodward said. "That's what is so great about Spokane is everybody, is part of all of us coming together to do this work, so that makes the work even better."

Woodward applauded the work of the group, but Miyamoto and others, including city councilwoman Betsy Wilkerson, say the city should be doing more to combat the heat.

"I think that there is quite a bit of opportunity for reallocation of funds to be made more available to the people that absolutely need it," Miyamoto said. "Our government needs to pay as much attention as we are."

"Spokane is a giving city," Wilkerson said. "But we can't always depend on our partners to step up. We have to be ready and able to lead in that space."

The administration has been receiving criticism for their response to the heat wave. On Thursday, they announced they would have 1,300 water bottles at a new cooling center downtown. They originally planned for 30 chairs inside the air conditioned room inside the Looff Carrousel, but with new relaxed COVID guidelines from Governor Inslee, they were able to bump the number up to around 70.

"I think it's an intentional, thoughtful plan," Woodward added. "And I'm proud of the work that our employees have done to put it together."

The group will continue handing out water bottles, snacks, and toiletry packs for the remainder of the heat wave.

"We're here for each other when we need each other," Miyamoto said. "And it's important for everybody to feel that community."

Community members are standing on the streets of Spokane to help people in need.

Watch how one Facebook group is keeping thousands hydrated on @KREM2 after the Superstar Racing Experience event. pic.twitter.com/m93JttMW7z