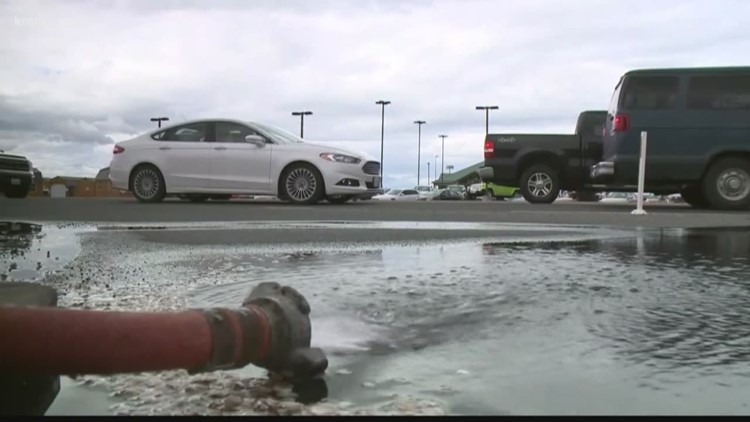 AIRWAY HEIGHTS, Wash. — Health experts will be conducting door-to-door exposures assessments for people living in Airway Heights near Fairchild Air Force Base where some of the drinking water was contaminated by per- and polyfluoroalkyl substance (PFAS).

The Center for Disease Control and Prevention and the Agency for Toxic Substances and Disease Registry will be conducting the assessments at households in Airway Heights west of Hayford Road since June 8, 2016 and are connected to the city’s drinking water supply system. They will begin door-to-door recruitment on Saturday and it will do until Oct. 23.

According to Spokane Regional Public Health Spokesperson Kelli Hawkins, the goal of the assessments is to provide information to communities about levels of PFAs in their bodies. Hawkins said the information might be used to help inform future studies on the impact PFAs have on human health. Airway Heights residents will be randomly selected to participate in the assessments.

Tests done in May 2017 showed that Airway Heights' domestic water supply had been impacted by PFOS and PFOA.

These chemicals are found in fire-extinguishing foam and other materials and are thought to have seeped into groundwater supplies from a fire training site located on the eastern edge of the Fairchild Air Force Base.

The water used by city residents now comes from the City of Spokane, so the public is no longer exposed to these chemicals in the water from Airway Heights' wells, according to city officials.

In Nov. 2018, three land owners in Airway Heights and Medical Lake sued the U.S. government, the Department of Defense and the U.S. Air Force over groundwater contamination caused by firefighting foam.

The EPA issued a drinking water health advisory in early 2017 due harmful chemicals in the water that could cause health problems including cancer and liver damage, among others.

Testing done at Fairchild AFB showed contamination in some wells bordering the base were at least 15 times higher than the range considered safe by the EPA.

RELATED: Power restored to 99% of Avista customers after Spokane snowstorm