The meeting comes as coronavirus cases continue to increase throughout the state and within the district's four-county region. 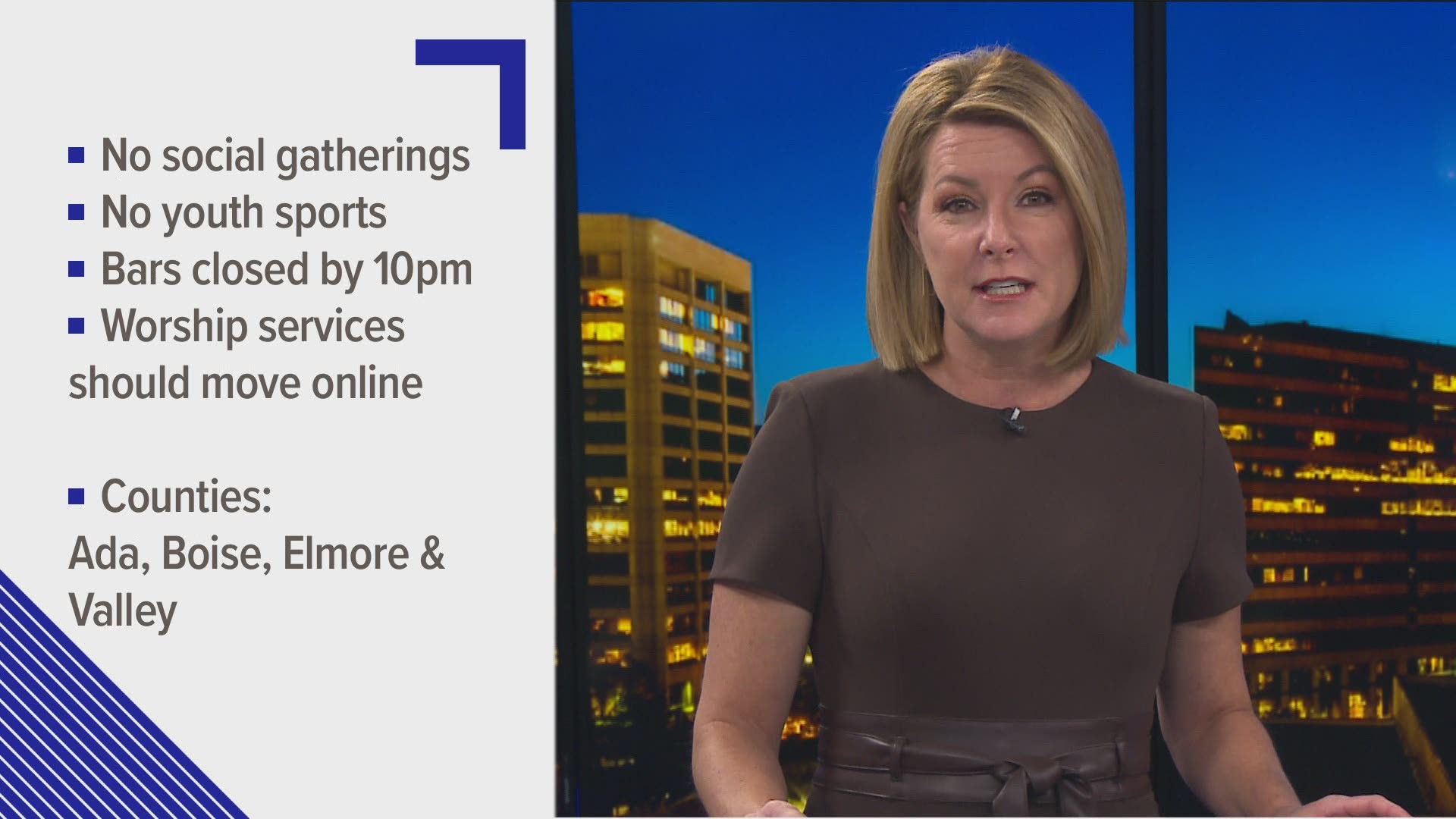 BOISE, Idaho — The Central District Board of Health on Tuesday night voted unanimously to approve a public health advisory that urges Idahoans to take certain steps to help curb the spread of COVID-19 within the community.

The decision comes as cases continue to surge throughout the state, and within the district's four-county region that includes Ada, Boise, Elmore and Valley counties.

Kim Link, the program manager for the health district, told the board that all of the metrics they have been monitoring are very concerning, including the overall number of new cases in recent weeks.

"We're getting as many cases in a single day that we should be getting in a week," she said.

Noting that "COVID is getting the better of us," Link added that they are seeing unsustainable increases in hospitalizations and the district's positivity rate.

"The trajectory that we're on is not sustainable in the short term," she said.

CDH Director Russ Duke presented the proposed health advisory to the board, saying it is not an order, but rather, "a strong recommendation" designed to reduce the spread of the virus.

"This is the first time in 100 years we've had a pandemic so I don't know exactly how applicable [the advisory] is but again it's looking at giving our communities guidance on exactly what we believe they need to do to protect themselves their neighbors, and their loved ones," Duke said. "And in the case of this pandemic to ensure we can all continue to have access to health care over the coming months."

The advisory recommends that people wear face coverings at all times around anyone who is not a member of their immediate household when physical distancing of at least six feet cannot be maintained. The only exceptions are for children younger than age 2, people who have trouble breathing, people who cannot remove the mask without assistance, or people who are obtaining a service involving the nose, face, or head - such as a dentist appointment.

Mask mandates currently in effect for Ada and Valley counties will remain in effect, Duke said.

The advisory also urges people to work from home if at all possible, to minimize non-essential travel, and to suspend visits to congregate living facilities, such as prisons or long-term care facilities.

With the holidays fast approaching, the advisory urges people to avoid social gatherings, including among family members who do not live in their household.

The advisory recommends that anyone age 65 and older, or who smokes, or who has a health condition that puts them at risk for severe reactions to the virus should avoid close contact with anyone other than immediate household family members.

As for businesses, schools and other places where group activities occur, the advisory recommends the following:

Duke said that the advisory will remain in effect until two things happen: a sustained two-week decline in cases within the district; and a two-week case rate of less than 30 confirmed cases per 100,000 population per day.

The board agreed that if one of the three local health systems - St. Luke's, Saint Alphonsus, or the Boise VA Medical Center - is forced to implement crisis standards of care, the board will vote on making the advisory a public health order, which may include additional restrictions.

Idaho has surpassed 1,000 daily COVID-19 cases nearly every day for the last two weeks. The spike in cases is beginning to overwhelm local hospitals, some of which have had to send patients elsewhere due to being overcapacity. St. Luke's Health System last week announced that it is suspending certain elective surgeries through the end of the year.

The state has also seen a dramatic uptick in the number of deaths reported. The statewide death toll stood at 773 as of Monday. In November alone, nearly 150 people have died from coronavirus-related illnesses.

On Friday, Gov. Brad Little announced that the state would revert back to Stage 2 of the Rebound Idaho plan.

Stage 2 restrictions include a limit on gatherings to 10 people or less, both inside and outside. Religious and political expression is exempt from the gathering limit, however, and bars, restaurants and other businesses can remain open, although patrons must be seated when not entering or leaving the business.

RELATED: What does Stage 2 of Idaho's COVID-19 reopening plan mean for Fall 2020?

Little urged residents to celebrate Thanksgiving with the people in their own household, and avoid traveling, stressing that making "difficult choices" are worth it to protect the people around you. In a news release last week, Central District Health also urged people to choose "lower-risk ways of honoring traditions and celebrating with family and friends in the coming months." The health district released guidance for safer celebration of the upcoming holidays.

During his news conference, Little also announced that he was mobilizing the Idaho National Guard to help combat the pandemic as cases threaten to overwhelm the state's healthcare system. The executive order signed by the governor calls up 100 guardsmen to help expand healthcare access by assisting with mobile testing, facility decontamination, and more.