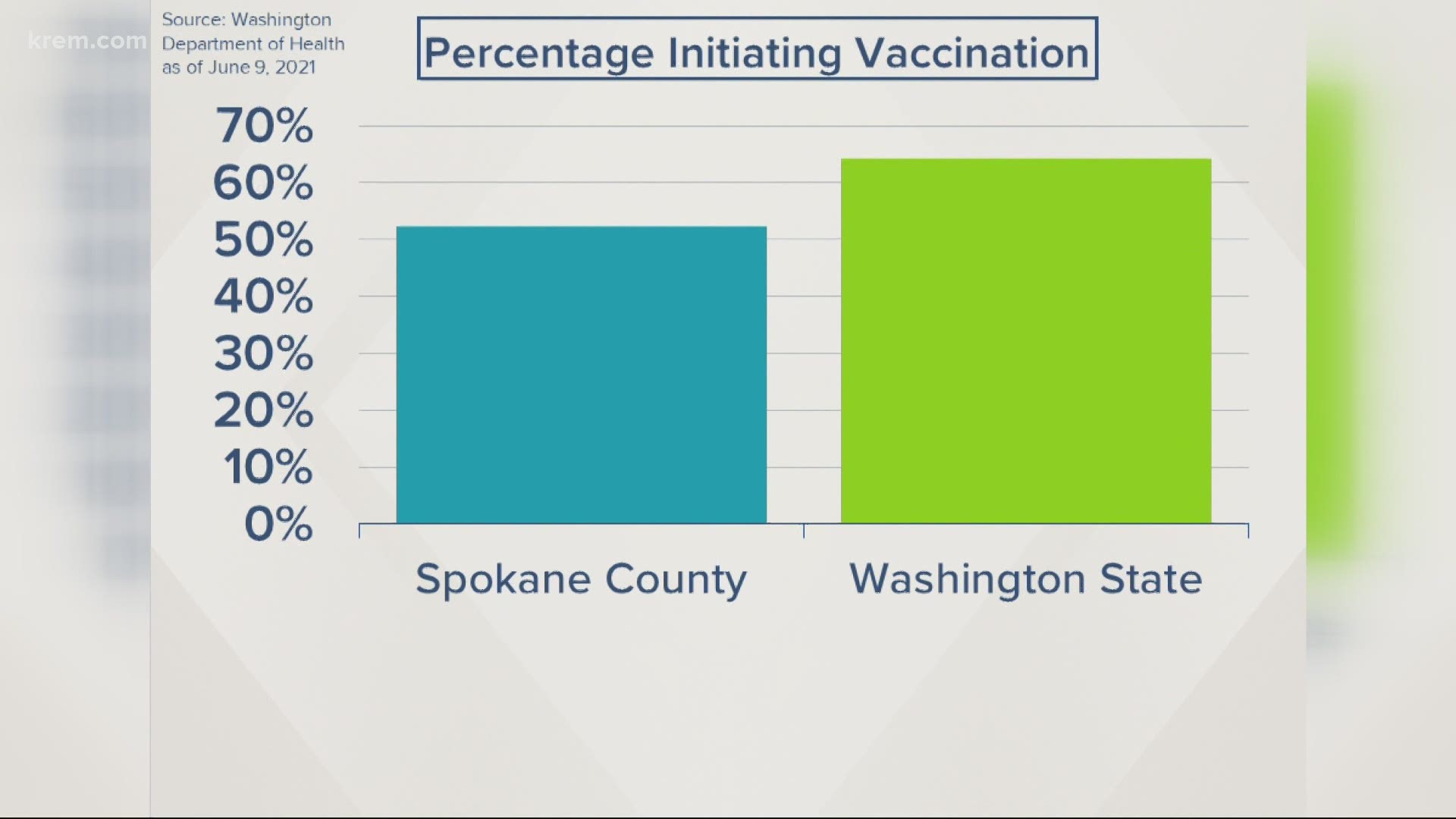 SPOKANE COUNTY, Wash. — Washington state as a whole is sitting at 64.25 percent of people 16 and older receiving at least one shot of a COVID-19 vaccine, according to Washington State Department of Health data.

While the state may be inching closer to Governor Jay Inslee's goal of 70 percent in order to reopen before his June 30 deadline, Spokane County is lagging behind the statewide average. In Spokane County, the rate of people initiating vaccination is sitting at 52.37 percent, more than 10 percent lower than the statewide rate.

"I do believe that some of that is because for that particular group, it needs to be accessible, it needs to be convenient," Velazquez said. "We need to highlight the importance of a vaccine in a way that it's made a priority."

The problem isn't just here in Spokane County. It's a trend taking place statewide. According to data from the Washington State Department of Health, a little more than half of people 18-34 in the state have received at least one shot. The next lowest rate is among those 35-49, which sits at 63.3 percent. Both of these rates are far away from the 65 and older vaccination rate of 80.1 percent.

One issue happening across the country when it comes to vaccines is a lack of demand to keep up with a surplus of supply, putting some doses at risk of expiring. However, Velazquez said this isn't happening in Spokane County.

One way that Washington has tried to get more people vaccinated is through incentives, such as the state's vaccine lottery. So far, one person has won $250,000 as part of the lottery. Velazquez said he thinks it is one factor helping people get vaccinated.

"I think it has increased the number of inquiries we get about immunization. But I do believe the information that is out there, not only about the lottery, but all of these other things that are we're doing and that are happening around the community is what's motivating people to do it," Velazquez said.

This isn't the only incentive locally. Groups have put on events to encourage vaccinations, including vaccine happy hours at the Spokane Area Mass Vaccination Site. A happy hour is being held this Thursday from 5-7 p.m., when people getting vaccinated can get ice cream from local shop the Scoop.

Mark Starr, the owner of David's Pizza, has also held vaccination drives and has put on happy hours at the local mass vaccination site where free slices of pizza are given out to those receiving a dose of a COVID-19 vaccine.

Brick West Brewing held an event in May where those getting vaccinated could buy beer for $1. Spokane Pride has also offered vaccine clinics to help get the LGBTQ+ community vaccinated.

Apex Cannabis is holding an event this Thursday and Friday as part of the state's Joints for Jabs initiative. Those who sign up for a vaccine appointment ahead of time will get a 25 percent discount on their purchase at the store, while those who complete a walk-in appointment will get a 15 percent discount. Those are taking place on June 17 from 11:30 a.m. to 2:30 p.m., and June 18 from 1 p.m. to 4 p.m.

All of this comes in an effort to reopen sooner, and Velazquez said it will also be important for reopening safely.

"Our goal is to get to 70 percent minimum," Velazquez said. "If we can get more than that, that'll be great for the Spokane County population. The reason for that is it will give us better options in terms of potential transmission as we're decreasing the number of hosts."