Washington health officials say the next phase of the vaccination rollout will include four tiers, including a tier for some people under the age of 50. 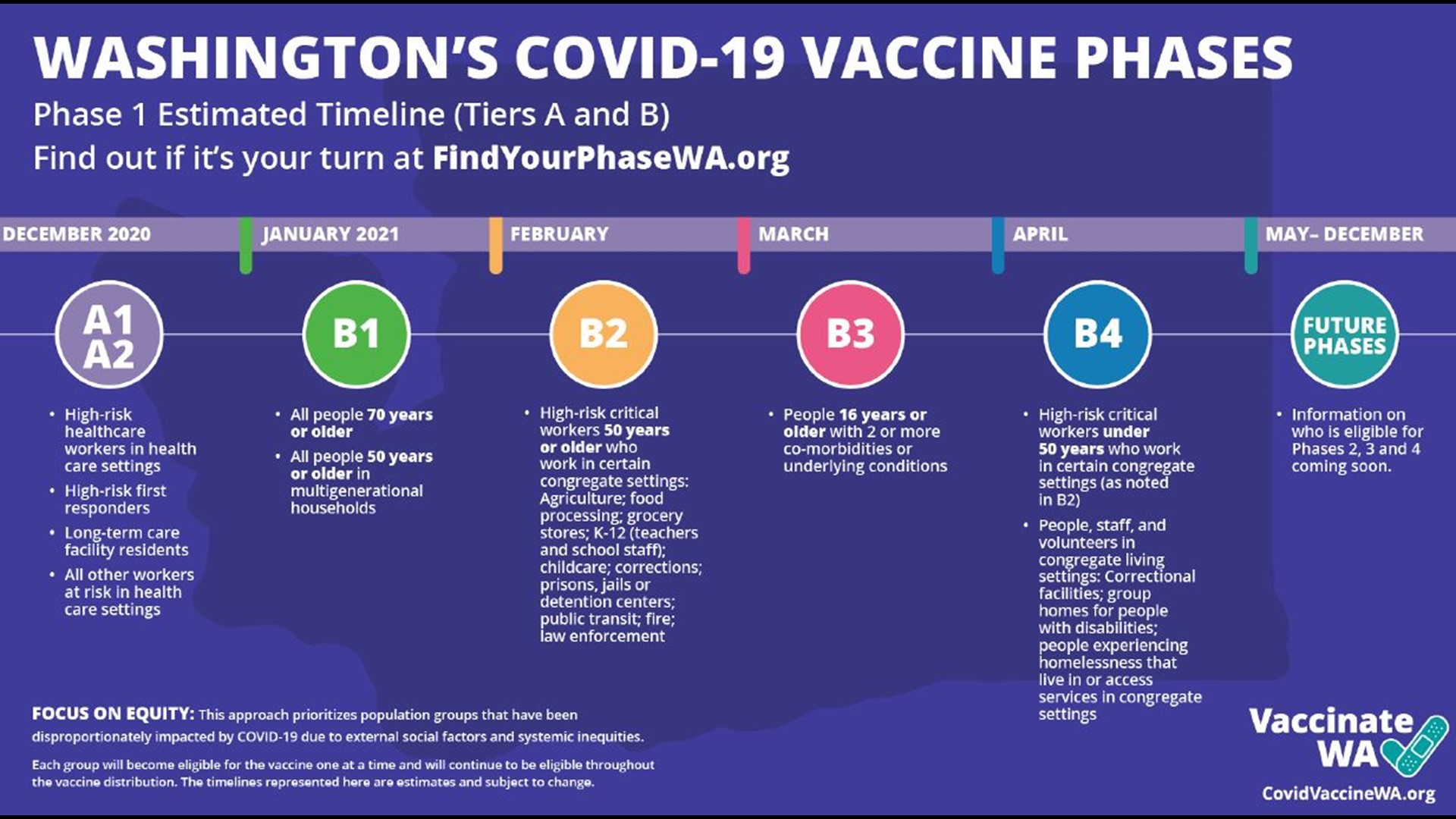 Washington state health officials detailed plans for Phase 1B of the state's vaccine rollout on Wednesday.

Though the plans are in place, the state remains in Phase 1A.

When Phase 1B goes into effect - likely not until after January - there will be four tiers of prioritization of vaccinating Washingtonians:

Secretary of Health Dr. Umair Shah said as of the morning of Wednesday, Jan. 6, 522,550 doses of the vaccine have been delivered. Of that supply, 126,602 total doses have been administered. There is up to a three-day lag in data reported to the state.

Based on the current data, approximately 24% of doses in Washington state have been administered.

“We’re doing everything we can to work with communities so we can get vaccines not just into the state, but into the arms of people as quickly as possible,” Shah said.

He said that it's important for the state to move faster on the vaccinations.

“It does appear that we have picked up the pace for the vaccination as well, which is also really important to see. So again, it’s not really how we start, it’s how we continue to progress."

Michele Roberts, the Deputy Secretary of Health, said there were a number of factors contributing to the slow rollout.

“There were a lot of unique circumstances that made the first few weeks challenging because of the holidays, unpredictable delivery schedules and really the time needed at that local level for the extensive planning to scale up these large scale campaigns and vaccination events for health systems to be able to be able to vaccinate people easily outside of their own system.”

Phase 1A of the vaccine plan includes at-risk health care workers, first responders and long-term care facility residents and staff. Over a half-million people are included in the first phase of Washington's plan.

DOH has a new tool that will allow residents to determine their eligibility for the COVID-19 vaccine. PhaseFinder allows users to take a survey to determine when they will be eligible to get the vaccine. Currently, the tool only works for determining if people are eligible for Phase 1 of the vaccine plan. It is expected to launch to the public Jan. 18.

RELATED: Can you get the COVID-19 vaccine in Washington? Online tool determines eligibility

Gov. Jay Inslee said some COVID-19 restrictions in Washington will be eased beginning next week and the state will change its reopening plan to move from a county-based oversight system to one focused on regions.

The governor held a press conference Tuesday to unveil his "Healthy Washington" plan, and said all regions would begin in Phase 1 of the new plan.

Inslee said Tuesday the state’s new guidelines would go into effect Jan. 11 and include “a small resumption of some activities statewide.”

Inslee said some live entertainment with very tight capacity restrictions and some fitness programs would be allowed.

Also, instead of having each of Washington’s 39 counties treated separately, the state will divide them into eight geographic regions based on health system resources when considering virus oversight.